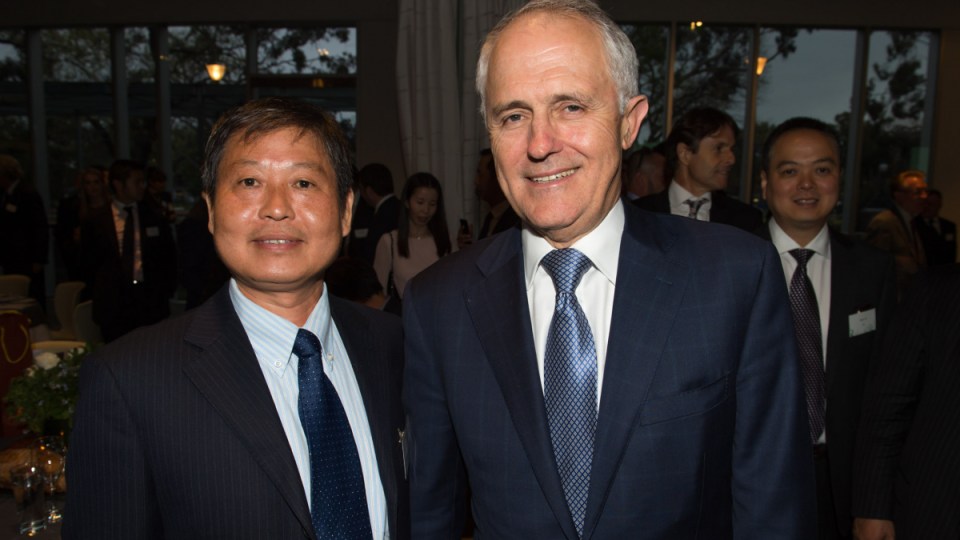 Kejun (Kevin) Huang with then PM Malcolm Turnbull in 2015.
exclusive

The mystery of a $105,000 donation linked to Liberal MP Gladys Liu has been solved and it involves her Chinese employer dropping six figures to dine with then prime minister Malcolm Turnbull.

But in a plot twist, the dinner never occurred and Brighsun, the Chinese-owned company that won the auction, never asked for a refund.

Victorian Liberal Party sources have told The New Daily that Ms Liu’s employers still agreed to pay the Liberal Party $105,000 – for nothing.

The Chinese-owned company Brighsun secured the winning bid at a 2015 fundraising dinner held at Zinc, in Melbourne’s Federation Square.

Despite reports that the one-on-one dinner with the PM was cancelled following ASIO warnings about some of the people who might attend the event, the Liberal Party claims this is not the case and insists that no money was ever returned.

Among the items auctioned at the event were dinners with Mr Turnbull and then foreign minister Julie Bishop, which sold for more than $100,000 each to private donors.

The Herald Sun has previously reported that the dinners never happened after intelligence agencies raised security concerns, and the Liberal Party was forced to refund more than $300,000 – a claim that Ms Liu and the party deny.

Known as the Liberal Party’s “million-dollar woman”, Ms Liu has had great success as a party fundraiser – prompting her to spruik her record when she sought preselection for the seat of Chisholm in 2019.

“I have raised over $1 million for the party by organising events both large and small, centrally for the party as well as locally for MPs and candidates,” Ms Liu wrote.

The $105,000 Brighsun donation, one of the largest from an individual company to the Victorian Liberal Party in 2015, is detailed in filings to the Australian Electoral Commission.

On Sunday, Ms Liu declined to answer questions about whether she acted as a go-between in organising the $105,000 Brighsun EV donation, whether it was for an auction or fundraising dinner she attended, or whether it related to a fundraising dinner at Melbourne restaurant Zinc in 2015, attended by then prime minister Malcolm Turnbull.

“At all times, I have sought to comply with relevant state and federal disclosure laws,” she told The New Daily.

The mysterious donation has emerged after Ms Liu indicated she was auditing her involvements with Chinese organisations with links to Communist-backed foreign influence operations and her fundraising activities.

According to the Liberal Party, a company called Brighsun New Energy made a $105,000 donation in 2015-16 listed as “other”, rather than a cash donation, suggesting it was an auction item or a fundraising dinner.

In the same filings, Ms Liu is recorded as donating $39,000 but is listed as “other”, suggesting it was money for tickets to a fundraising dinner or an auction item rather than cash.

It’s not clear how she could have spent $39,000 on tickets to Liberal Party events or auction items in a single year and her office has not provided a breakdown of the expenditure

At the time of the $105,000 donation, Ms Liu worked for Brighsun as a communications director, organising media events that included Liberal frontbencher Greg Hunt, who held the climate change portfolio at the time.

According to ASIC records, Brighsun Electrical Vehicles Group was registered in September 2015, and listed its registered office as a house in Hidden Grove Boulevard, Keysborough, Victoria.

The company directors were Kejun Huang and Genjiang Zhang, two Chinese-born investors based in Zhejiang, China.

About the time of the donation, Brighsun’s CEO Kejun (Kevin) Huang was photographed with Mr Turnbull.

Mr Turnbull told The New Daily he did not recall how he met Chinese businessman Mr Huang, or if it was at a Liberal fundraiser.

Ms Liu and Mr Hunt also appear in photographs attending events highlighting the electric vehicles about the same period. They were used to promote the venture and on the Chinese company’s official website.

Ms Liu organised events to promote Brighsun electric buses in Melbourne in October 2015, securing a Guinness World Record for the bus travelling a whole day or interstate without having to find somewhere to recharge.

“We believe it will bring a whole new concept of public transport with no pollution to Australia and to the world,” Ms Liu said.

On Sunday, Liberal frontbencher Stuart Robert said Ms Liu was double-checking her declarations on donations and past links to organisations.

“The issue isn’t the quantum, the issue is the declaration. Transparency is important in our democracy,” Mr Robert told Sky News.

“I’m satisfied that she is going through her associations. She’s double-checking that to ensure that they are declared or that she removed herself from them,” he said.