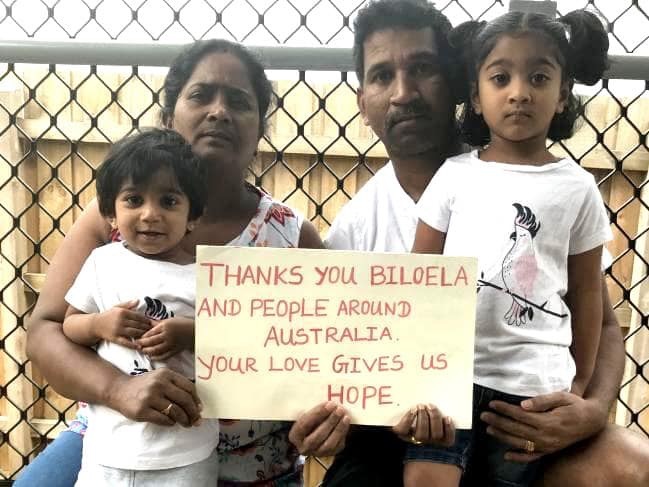 The family fear persecution if they return to Sri Lanka, where Tamils are an ethnic minority. Photo: Twitter

A Tamil family fearing persecution has been allowed to stay in Australia for almost another fortnight, after a federal court judge ordered more evidence be provided.

The court gave the family, which had settled in the Queensland town of Biloela, a two-day delay on Wednesday after Immigration Minister David Coleman decided not to use his discretionary powers in favour of the family.

That meant they were due for deportation by 4pm on Friday, giving lawyers enough time to consider new materials.

However, on Friday morning in Melbourne, Justice Mordecai Bromberg ruled the government could not forcibly remove the family, who are detained on Christmas Island, until 4pm on September 18.

Justice Bromberg ordered Mr Coleman to provide evidence as to why the youngest child Tharunicaa, 2, has no right to protection. He said both parties consented to the further delay until a “full and final hearing” was held.

Speaking outside court, the family’s lawyer Carina Ford said there was “still hope” an agreement could be reached, preferably without the family being sent back to Sri Lanka to apply for visas.

“We are open to negotiation on this matter. There are other ways to mediate disputes and we remain open on those issues to discuss alternative plans,” she told reporters.

“I would also add that it also remains that the bar can be lifted to enable other options onshore.

“The government has made their position clear in terms of where it is. We are just saying this is an exceptional case.”

Ms Ford said the family’s legal team would need to consider whether to apply for the family to be held away from Christmas Island, especially if court proceedings “drag on for months”.

Tamil Refugee Council spokesman Aran Mylvaganam called on the government “to bring this family back”.

The hearing has been set for September 18.

Parents Priya and Nadesalingam and Kopika, 4, and Tharunicaa will remain on Christmas Island.

The family’s legal fight is focused on Tharunicaa’s right to apply for a refugee visa, amid claims she will be subjected to “serious harm” if she is sent to Sri Lanka.

Friday’s ruling comes as the federal government ruled out fast-tracking visas for the family if they end up being deported to Sri Lanka.

A succession of courts, including the High Court, have previously found the parents and the eldest child are not refugees and do not qualify for protection.

The government is fighting Tharunicaa’s claim for protection, saying it’s “futile”, despite a community outcry for the family to remain.

Priya and Nadesalingam had settled in the Queensland town of Biloela, where they had their two children, after arriving separately by boat in 2012 and 2013.

Despite being Australian-born, Tharunicaa was deemed an “unauthorised maritime arrival” under the Migration Act, which stipulates children of asylum seekers who arrive in the country by boat cannot apply for a permanent visa.

Home Affairs Minister Peter Dutton has already ruled out using ministerial powers to grant the family asylum, saying they should all go back Sri Lanka and apply to come to Australia “the right way”.

Asked if this meant any applications could be fast-tracked, Mr Dutton said “no” and they would be treated like everyone else.

“That’s an issue for them,” he told Nine’s Today show on Friday.

Mr Dutton again said that granting the family the right to stay in Australia would “restart the boats”.

The minister claimed the general of Operation Sovereign Borders had recently travelled to Sri Lanka, and found the family’s case was being “talked about” by people smugglers.

“Others are trying to get people on to boats now,” he added.

“This family is used as a pawn as others have been by people smugglers.”

On Wednesday, Justice Bromberg ordered the federal government not to deport the asylum seekers in line with an injunction that expires at 4pm on Friday.

Earlier on Friday before the court hearing, the family’s lawyer Carina Ford said the judge or the government’s lawyers may still want more time on Friday, in which case her team could push for another delay to the deportation.

“It may not be concluded … I guess we wait and see,” she told AAP.

Biloela resident, Angela Fredericks, who is on Christmas Island to support the family, said they were “very apprehensive” about what the day would bring.

But Priya and Nadesalingam are not giving up hope.