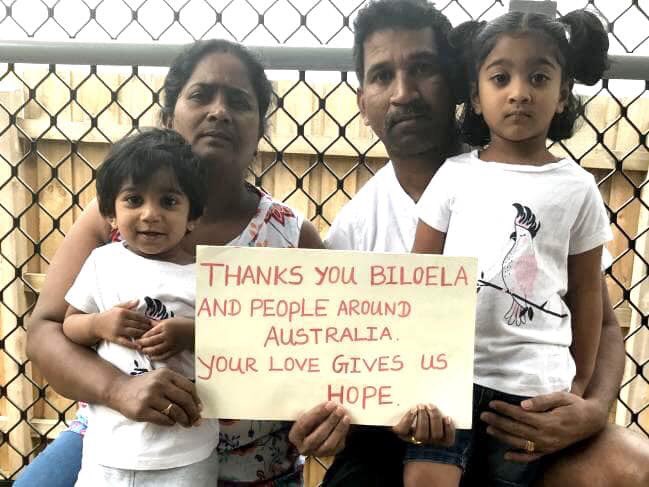 Lawyers for a Tamil family fighting deportation to Sri Lanka have just two days to figure out a legal strategy to keep them in Australia.

The legal deadline comes after Immigration Minister David Coleman decided the youngest daughter would not be allowed to apply for a protection visa, by lifting the bar under the Migration Act.

Lawyer Carina Ford said although the family was in “uncertain territory”, their “fight is not yet over”.

“We have only had a short time to consider the issues and obviously we need to think about the next way that we will progress the matter,” she told reporters outside court on Wednesday.

The injunction preventing the Sri Lankan family of four from being deported has been extended from Wednesday until Friday, when another Federal Court hearing is scheduled to take place.

The case for husband and wife Nadesalingam and Priya and their oldest daughter Kopika, 4, to stay in Australia rested on Tharunicaa’s claim because she was not yet born when her Queensland-based mum was given the green light to apply for a protection visa in late 2016.

Barrister Angel Aleksov, representing Tharunicaa, told a Federal Court judge last week that the two-year-old’s claim for protection had not yet been assessed by an Australian official.

But in a surprise revelation on Wednesday, the court heard her eligibility for asylum had already been assessed by a member of the Department of Home Affairs.

The family is now in an uncertain legal position until 4pm on Friday, when an injunction barring the deportation of the youngest daughter runs out.

Mr Aleksov said the family was advised to drop their case “because it is futile” given Tharunicaa’s visa expired “at the end of the judicial review process” and her parents’ applications for asylum have been repeatedly rejected.

How it all unfolded

Priya and Nades fled Sri Lanka at the end of country’s ugly civil war and came to Australia separately by boat in 2012 and 2013.

The pair both told immigration authorities they feared persecution in their homeland.

Upon arriving to Australia, Nades was taken into immigration detention and released after four months, while Priya was detained for about 10 months while undergoing health, identity and security checks.

The pair later met through Sydney’s Tamil community and moved to the coal-mining town of Biloela, located in Queensland’s Banana Shire and commonly referred to as the ‘Shire of Opportunity’.

Priya and Nades married in November 2014, with Kopika and Tharunicaa born in the Biloela Hospital in May 2015 and June 2017 respectively.

Nades volunteered at St Vincent’s De Paul with Priya and worked as a trolley attendant at Biloela Woolworths before being employed at the local Teys Australia abattoir.

In March last year, after the couple’s bridging visas expired, immigration officials came to the family’s home and took them to a detention centre in Melbourne.

They remained there for 18 months before being put on a flight to Sri Lanka around 11pm last Thursday.

A last-minute injunction granted by a Federal Court judge forced their plane to land in Darwin.

The family was moved from Darwin to Christmas Island the next day to await the outcome of their court bid to avoid deportation.

Lawyers acting for Tharunicaa were seeking to argue that no assessment had been undertaken to determine whether she is owed protection under Australian law.

Meanwhile, the Department of Home Affairs and the High Court had already ruled the rest of the family did not have a legitimate case for refugee status in Australia.

What the politicians say

Prime Minister Scott Morrison said he would not intervene because it would send the wrong message to other people seeking asylum.

Labor Senator Kristina Keneally called on Mr Morrison to “reflect” on his Christian values and let the family stay.

Minister for Home Affairs Peter Dutton, who labelled Ms Keneally’s call a “cheap shot”, said he thinks the Tamil parents are being “unfair” to their children by dragging out their case.