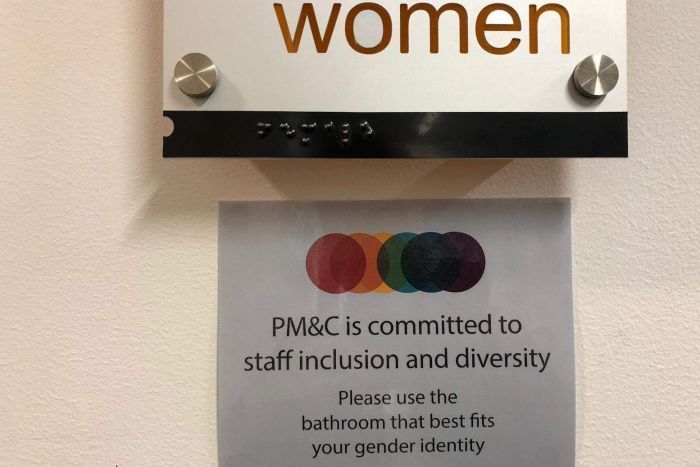 Prime Minister Scott Morrison has been ridiculed for prioritising toilets over the state of the country after he took swift action against a gender-inclusive bathroom sign.

Mr Morrison took less than two hours to jump on the issue and call for the removal of a sign which encourages federal government staff to “use the bathroom that best fits your gender identity”.

The politically correct instruction was fixed to the wall outside the women’s toilets at the Department of Prime Minister and Cabinet, less than a kilometre from Mr Morrison’s office at Parliament House.

A photo of the sign was posted to Twitter by Nine political editor Chris Uhlmann just before 3pm.

Meanwhile at the Barton offices of Prime Minister and Cabinet… pic.twitter.com/oVL9f0xrXe

Later that afternoon the prime minister discussed the loo controversy on 2GB radio, promising to take action on the issue.

“Honestly this is why we call it the Canberra bubble, it’s ridiculous … It will be sorted out,” Mr Morrison told radio station 2GB.

“I don’t think this is necessary, I think people can work out which room to use … it’s political correctness, over the top.”

Mr Morrison’s unhesitating action on the dunny controversy has been slammed by opposition leader Anthony Albanese who questioned “How is anyone meant to take this bloke seriously?”

“The PM doesn’t have a plan to deal with cost of living going up, living standards going down and wages going nowhere,” Mr Albanese tweeted.

“But he has a plan to deal with this bathroom sign in an office building.”

Journalist John Butler broke down the sequence of events which highlighted the swiftness with which the prime minister attended to the matter, tweeting:

“2.49pm: journo tweets pic of a sign saying ‘use the bathroom that best fits your gender identity’.

“4.35pm: PM Scott Morrison gets on the blower to 2GB, says the sign is “not necessary” and will be ‘sorted out’.

“this is so cooked. We got nothing bigger to worry about than this?”

2.49pm: journo tweets pic of a sign saying "use the bathroom that best fits your gender identity"

4.35pm: PM Scott Morrison gets on the blower to 2GB, says the sign is "not necessary" and will be "sorted out"

this is so cooked. We got nothing bigger to worry about than this? https://t.co/1RBH5D6hoY

Gender diversity and political correctness are touchstone issues for conservatives, including the hard-right members of the Liberal and National parties.

Earlier this week, the prime minister told Canberra bureaucrats in a speech to the Institute of Public Administration that it was “important we value diversity” in the public service, the ABC reported.

“This is right in and of itself,” he said.

“It is in keeping with the more diverse, pluralistic society Australia has become over many decades. And it chimes with our national ethos of ‘live and let live’.”

“I believe a commitment to diversity should encompass diversity of viewpoints within the [Australian Public Service],” he said.

“There is compelling evidence that this helps teams find answers to complex problems by bringing together people who approach questions from different points of view.”

Earlier in August, Newspoll revealed the first dip in support for the prime minister and coalition government since the federal election.

Mr Morrison’s performance fell with a six-point rise in the number of people dissatisfied to 42 per cent and a reduction in net satisfaction rating of plus-15 to plus-six points.

However, he remained preferred prime minister with 48 per cent compared with 30 per cent for Mr Albanese, despite the hit to his personal approval ratings.