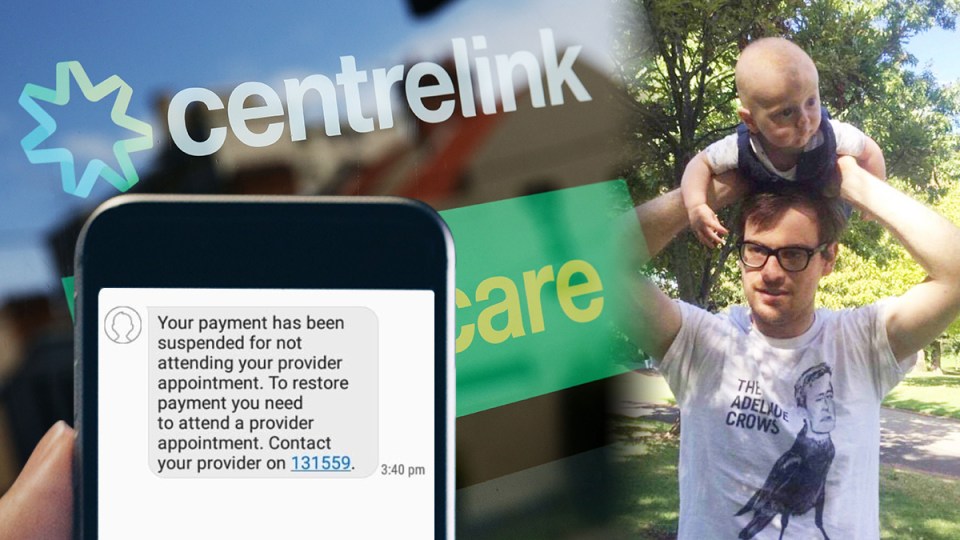 Owen Bennett is one of several Newstart recipients who claim to have been unfairly suspended from their allowance.

Text messages reveal how a young father was cut off from Newstart after being accused of missing a job-seeker appointment – 17 hours before the scheduled meeting.

The Victorian man’s evidence is just one of a series of claims of unfair treatment by Centrelink and its contractors, as dole recipients tell The New Daily how they were driven to the brink of suicide after being denied the cash they needed for basics, such as food and rent.

Last week, as the government faced mounting pressure to increase Newstart, Employment Minister Michaelia Cash released figures showing just how many people were apparently not meeting requirements, such as showing up to interviews.

The government numbers showed nearly 80 per cent of job seekers had their payments halted at least once in the past financial year.

But it’s understood the Department of Employment, Skills, Small and Family Business does not collect data on the number of people who are suspended due to errors.

Here, welfare recipients tell how they were cut off from payments by robotext messages and administrative mistakes.

‘Tired of running around on their behalf’

Somewhere between caring for his son and working casual shifts, Owen Bennett has to put in extra legwork correcting what he said are glaring errors made by his employment service provider.

It has got to the point where Mr Bennett believes he is being “bullied” out of Australia’s welfare system.

The issue culminated on July 16, when the Melbourne man received a text, alerting him his Newstart allowance had been suspended because he failed to attend a scheduled appointment.

Just hours prior, Mr Bennett was texted the details of the appointment, reminding him the meeting was for the following day.

“I feel like this company, Sarina Russo, has the power of life and death over me,” he said.

“They can just keep on suspending me and I effectively have no rights because there’s nowhere I can appeal and there’s no oversight.”

It has been more than three weeks since the blunder, and Mr Bennett is still cut off from welfare payments.

“I’m just tired of running around on their behalf,” he said.

Mr Bennett said he’s been unfairly suspended at least six different times in the past year.

“This isn’t just me that it’s happening to. Those text messages are sent through an automated system,” he said.

“It’s something that must be happening across the board to potentially tens of thousands of unemployed people.”

‘It was pure horror’

It was business as usual for Melissa Fisher, 37, who made her way down to her jobactive provider for another regular appointment. That was a Friday.

On Saturday, Ms Fisher was shocked when she received a suspension notice.

“I was panicking so much,” she told The New Daily.

But she couldn’t do anything about it because the job provider had closed over the weekend.

“I was just stuck and for someone who has severe anxiety and other mental health issues, that’s probably the worst feeling,” Ms Fisher said.

“I had to go and stay with my brother for the weekend so he could keep an eye on me and make sure I didn’t do anything to harm myself.”

The Adelaide resident became reliant on Newstart about three years ago after the death of her disabled mother, for whom she cared full-time.

“Knowing I’ve got no options to get food or anything – it was pure horror,” she said.

Ms Fisher said she rang her job provider on the Monday, and was told by her case manager she mistakenly marked her absent for Friday’s appointment.

‘I’m such a bloody rule follower’

But in the middle of his shift, the Melbourne resident received a call from his jobactive provider, who bombarded him with questions about why he couldn’t attend the appointment.

“She was literally arguing with me,” he said.

Mr Clancy said he was told to drop everything and come to that meeting.

“I said … I’ve informed you I wasn’t able to make this meeting because I had work.”

At the end of a 90-minute call, Mr Clancy was told his Newstart payments would be suspended until he attended a “re-engagement session”.

“I’m such a bloody rule follower that to be told you’ve done the wrong thing is devastating to me,” he said.

Mr Clancy said he had no choice but to “give up a shift of work” to attend an appointment with his jobactive provider to have his payments reinstated.

“When you’re told that you’ve been cut off from your payments, you honestly don’t know where else to go,” he said.

The ease with which Newstart payments can be stopped drove Zeya Raymond* (name changed) to contemplate suicide.

She said she received an automated message from Centrelink saying her allowance was suspended because she did not attend an appointment about starting work for the dole.

She said the suspension notice was texted to her at 9am, before her scheduled 2pm appointment.

“I thought this was it, I’m homeless, I have to move back to the country,” she said.

“My life was about to be destroyed. I was thinking of the furniture I could sell.”

She said her payments were reinstated after notifying Centrelink of its error.

“The lady at reception pressed a button and my payment was back,” she said.

But the prospect of having her payments suspended again contributed to the deterioration of her mental health.

“Going to work for the dole 25 hours a week … and essentially not being able to leave or call in sick or quit was mentally devastating,” Ms Raymond said.

“If you don’t go, we will suspend your payments for three months,” she recalled being told.

“I was so stressed, I ruined job interviews because I looked mentally unstable,” she said.

“I was going to kill myself.”

Newstart injustices: Text messages show how a young dad was unfairly cut off from welfare