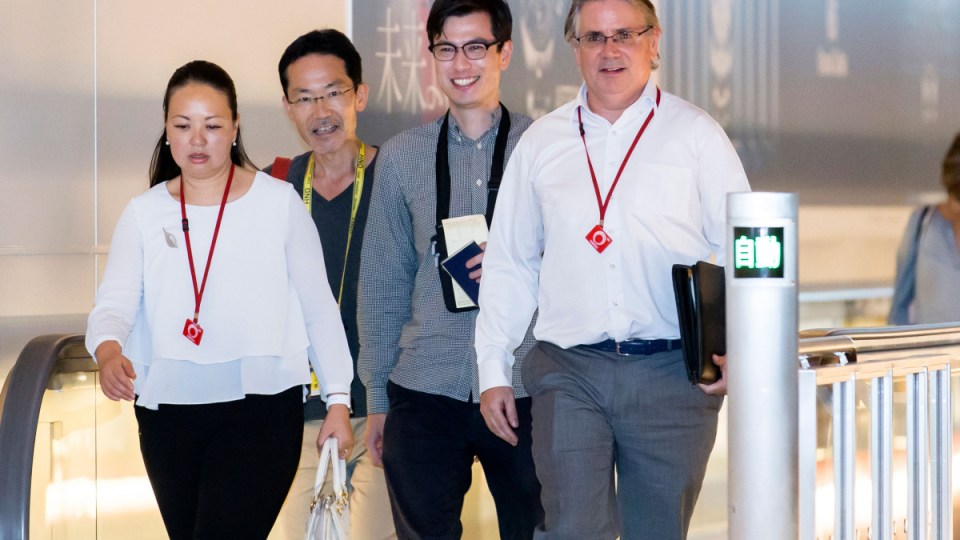 Perth man Alek Sigley has released a statement after being rescued from detention in North Korea, saying he is looking forward to returning to “normal life”.

But what happened between his disappearance more than a week ago and Thursday morning when he was released remains a mystery – and could stay that way.

Mr Sigley, 29, was reunited with his wife in Japan on Friday morning (Australian time) after travelling out of North Korea with the help of Swedish diplomats.

“I just want everyone to know I am ok, and to thank them for their concern for my wellbeing and their support for my family over the past week,” Mr Sigley said in a statement from Tokyo.

“I intend now to return to normal life but wanted to first publicly thank everyone who worked to ensure I was safe and well.”

It’s not known whether he plans to go back to North Korea, where he had been studying for his master’s degree.

His friend Michelle Joyce, who runs tour guides with him in North Korea, said she “wouldn’t be surprised if he returned” to Pyongyang.

“He’s a smart guy doing important work and the people looking after him in North Korea are good people,” Ms Joyce told The New Daily.

“I knew he’d be ok – whatever happened wouldn’t have been a big deal.”

She also said there was a lot more to North Korea than what Western media depicted in the news.

“It’s best to look at North Korea not just through the lens of nuclear weapons or Kim (Jong-un) or (Donald) Trump, or human rights, or starvation and famine of the 90s,” Ms Joyce said.

“There is so much more to North Korea than that.”

Sweden has been praised as a “key player” in the rescue mission.

Kent Rolf Magnus Harstedt, special envoy of the Swedish government, and his party arrived in Pyongyang on Monday. pic.twitter.com/OjDdMzAq3F

“My family and friends are always a source of love and support but have been even more so at this time,” Mr Sigley said.

“I also appreciate all the good wishes that myself, my family and my friends have received.”

Mr Sigley said he would not be making any further comment, now or in the future.

Given Pyongyang’s strict code of secrecy, it is possible the truth about what exactly happened to him may never come to light.

Mr Dutton said the university student was very fortunate to be free after he was released by the secretive state more than a week after he was reported missing.

“My advice would be pretty clear, I would stay in Japan,” Mr Dutton told the Nine network on Friday.

“I would go back to South Korea … I would come back to Australia. All of those would have to be better options before he returns to North Korea.

“I don’t think he will put himself back in that situation …. it could have ended up very differently.”

Sweden played a vital role in his release, prompting Prime Minister Scott Morrison to extend “my deepest gratitude” for their invaluable assistance.

Australia had relied on Sweden’s unique relations with North Korea because it lacked an embassy in the so-called ‘hermit kingdom’, which is shunned by much of the world because of its nuclear weapons program and human rights abuses.

Mr Sigley left North Korea and flew to Beijing where he met with Australian officials before flying on to Tokyo. After landing in the Japanese capital, did not answer when journalists asked why he was detained.

Mr Morrison announced his release on Thursday, saying it was “in nobody’s interests, in these quite sensitive consular cases, to go beyond simply saying I’m so pleased that he’s safe”.

Friend and University of Technology Sydney academic Bronwen Dalton said she enjoyed a moment of celebration with Mr Sigley’s wife Yuka Morinaga when the pair spoke on the phone.

“We were jumping up and down and we love Sweden,” Ms Dalton said.

“He’s a fine, young, emerging Asian scholar, he is very applied to his studies. I really doubted whether he did actually anything wrong by the regime.”

Mr Sigley is the first known foreigner to be arrested in North Korea since American student Otto Warmbier, who was sentenced to 15 years hard labour for allegedly stealing a propaganda poster in 2015.

Mr Warmbier was repatriated to the US in a coma a year-and-a-half later and died six days after his return.