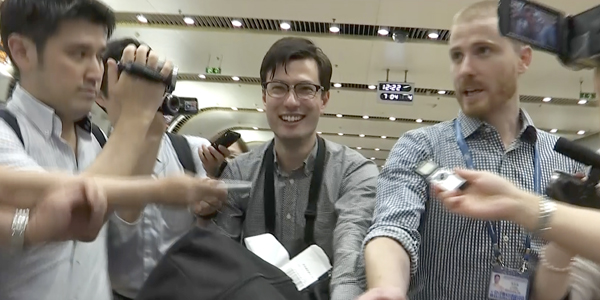 Australian student Alek Sigley was in good spirits when he arrived at the airport in Beijing on Thursday.

Perth man Alek Sigley, who was detained in North Korea, has been in reunited with his Japanese-born wife after landing in Tokyo.

The 29-year-old appeared in good spirits as he arrived in Japan on Friday morning (Australian time) on a flight from Beijing, where he travelled after his release by North Korea.

Mr Sigley was spotted smiling as he made his way towards the immigration counter, walking past reporters without making any comment.

Earlier he spoke briefly before leaving Beijing for Tokyo.

Mr Sigley had been missing in North Korea for more than a week before a Swedish delegation escorted him out of the secretive nation.

Fears were mounting over the 29-year-old’s fate after he suddenly lost contact with friends and family on June 25.

Speaking on the Ben Fordham Show on Thursday, Ms Payne said “it would not have been possible” to get Mr Sigley out of North Korea if it weren’t for the Swedish envoy.

Kent Rolf Magnus Harstedt, special envoy of the Swedish government, and his party arrived in Pyongyang on Monday. pic.twitter.com/OjDdMzAq3F

She said she received confirmation on Wednesday night that he had been detained, but was not told any details regarding his arrest.

“Once we were able to find Alek Sigley, which took a little bit of time because he wasn’t next to his phone, we were able to tell him he was safe when he landed in Beijing,” Ms Payne said.

On Thursday morning, the Swedish ambassador told Australia’s Seoul diplomatic post there was a “strong possibility that Alek may be able to be handed over to their Swedish delegation at the airport as they were leaving the DPRK (North Korea)”.

“The timeline was very tight and very short, and without the support and help of our counterparts in the Swedish government this would not have been possible, so we are deeply deeply grateful to them,” Ms Payne said.

The Australian government has not had an embassy in North Korea since 1975, and had depended on Sweden to try and confirm Mr Sigley’s whereabouts.

Downplaying their crucial role, Swedish authorities told The New Daily they had simply “responded in accordance with the agreement on consular support that it has with Australia”.

“It has done so in close co-operation with the Australian authorities.”

Sweden’s foreign minister Margot Wallström said in a tweet she was “relieved” he had made it safely out of the country.

“Sweden has done its utmost to work for Mr Sigley under our bilateral agreement with Australia. Relieved that the situation was resolved.”

Mr Sigley was greeted by reporters at an airport in Beijing after he re-emerged on Thursday.

He did not respond when asked to explain what happened to him in Pyongyang.

The student travelled to Tokyo on Thursday evening to be reunited with his wife, Yuka Morinaga, 26.

His father Gary told reporters he did not know yet whether his son had plans to return to North Korea, or his home in Australia, after visiting his wife in Japan.

“We are just over the moon that he is safe and sound,” Gary said.

“I am sure in the coming weeks there will be more information over what has transpired.”

Prime Minister Scott Morrison was met with jubilant cheers of “hear hear” when he announced to Parliament the news of Mr Sigley’s return on Thursday afternoon.

Here's the moment Prime Minister @ScottMorrisonMP informed the House of the release of Alek Sigley, in a statement on indulgence during #QT. pic.twitter.com/0jzOhM2Oz4

“I’m sure we all could not be more pleased that we not only know where Alek is, but that we know he is safe,” Mr Morrison said.

Mr Sigley had written a number of stories for NK News, an anti-North Korea publication, while studying at Pyongyang’s Kim II Sung University.

His connection to the news outlet featured among a range of theories seeking to explain his sudden silencing.