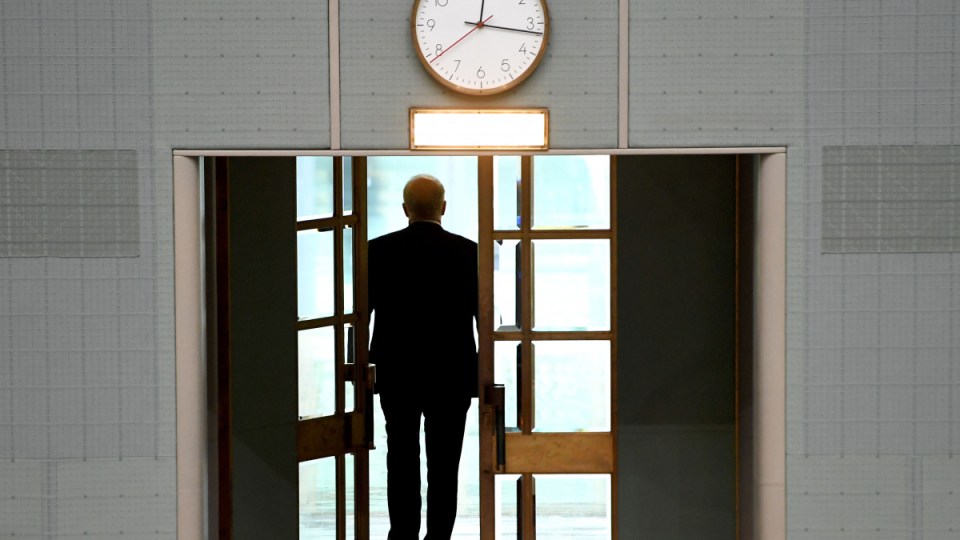 Scott Morrison has avoided a humiliating defeat on refugees by shutting down Parliament early, but won a Labor backdown over encryption laws to target terrorists.

In the last parliamentary sitting day of 2018, the Prime Minister emerged from the wreckage of a chaotic day in Parliament with his terrorism laws secured and with Home Affairs Minister Peter Dutton saved from referral to the High Court over constitutional concerns.

That’s likely to leave Mr Dutton in the clear for the election, because any referral in February will be too late for the High Court to resolve before the election.

The PM also ended the week delaying reforms to protect gay children from discrimination in schools.

But he came so close to losing control in the House of Representatives over a vote to allow the medical evacuation of children from Nauru that he shut down Parliament early rather than face the vote.

It passed the Senate and will be dealt with by the House of Representatives in February.

After hours of debate on the encryption laws, including the Labor leader Bill Shorten describing the legislation as “botched”, Mr Shorten rolled over last night passing the encryption laws without amendment just after 7pm in the Senate, to ensure they will be law by Christmas.

He conceded the government had left Labor in an “invidious” position.

“I want to make sure that this Christmas, that I have done everything I can to keep Australians safe,’’ Mr Shorten said.

“What’s happened – and I think it’s incumbent for it to be explained clearly and calmly – is that the legislation which would have got kids off Nauru had to be dealt with first before the security laws. The government ran down the clock in the Senate, so they didn’t have to get the kids off Nauru … They were willing to sacrifice therefore the encryption laws, which they know have to be amended.

“I will not sacrifice the safety of Australians because Mr Morrison doesn’t have the courage to deal with issues in the House of Representatives. I’m not prepared to go home when I know we can pass laws that make Australians safer.”

“Australia is a safer place as a result of the passage of the encryption laws in the Senate tonight,’’ he said.

“This ensures that our national security and law enforcement agencies have the modern tools they need, with appropriate authority and oversight, to access the encrypted conversations of those who seek to do us harm.

“To ensure the passage of the bill through the Senate tonight, the government has agreed to consider Labor’s proposed amendments in the New Year if any genuinely reflect the recommendations of the Parliamentary Joint Committee on Intelligence and Security.”

Labor blinked after the Prime Minister warned that “Bill Shorten is a clear and present danger to Australia’s security”.

But Mr Morrison was forced to run away from the vote on amendments to allow the medical evacuation of children on Nauru after it became clear that Labor, the Greens and the cross bench had the numbers to defeat the government on legislation in the House of Representatives.

It would have been the first time that had happened since 1929, forcing the government into retreat to avoid a de facto motion of no confidence in the government.

“This government should be ashamed of itself. It has put its own pride, its own political bacon, ahead of the children on Nauru, ahead of national security and the people of Australia,’’ Mr Shorten said.

Earlier, the Prime Minister’s decision had risked new encryption laws not passing Parliament, because they needed to return to the House of Representatives if amended by the Senate.

The tactics set up a challenge for Labor where it risked also being blamed for the failure for new encryption laws targeting terrorists, pedophiles and other criminals using apps on smartphones to conceal their communications.

It followed hours of debate over the laws to allow medical evacuations from Nauru which the government insisted would restart the boats.

“If you want to have an argument about border protection, bring it on. Bring it on,’’ Mr Porter said.

“Every day between now and the election. That is what the Australian people need to know is what you will do if you ever got your hands back on that policy again, and it will result in the deaths of children at sea.”