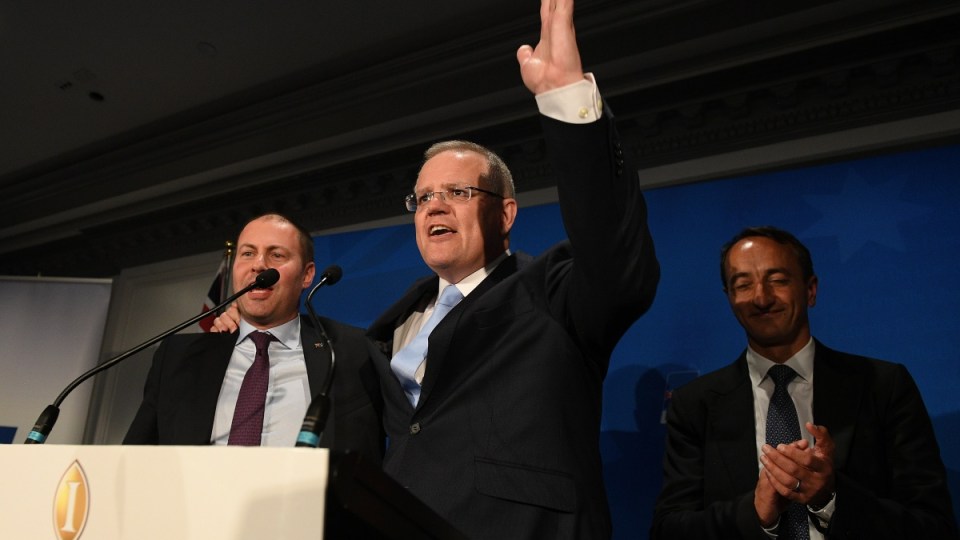 "The Liberal Party’s broad church has narrowed, leaving the party in the hands of fanatics." Photo: AAP
analysis

Scott Morrison likes a sermon. On Saturday night he employed some of the preacher’s rhetorical flourishes that helped make Martin Luther King reach through the ages. Some cadences were a little John F Kennedy-like.

But Mr Morrison’s We Believe was barely the faintest echo of I Have a Dream, or Ask Not What Your Country Can Do For You – his ambitions so small, his clichés so trite.

Yet it seemed to go down a treat with the faithful, their enthusiasm building with each slightly-higher-pitched “we believe”, never mind they were gathered to mark the biggest swing ever against the Liberal Party.

And that swing in one of the bluest blue-ribbon seats, Australia’s richest electorate, Wentworth.

Therein lies part of the Liberal Party’s problem: ‘preaching to the converted’ or, in current politics-speak, ‘shoring up the base’.

“We all value opinions that agree with our own,” is a long-held Pascoe family aphorism. The more conservative conservatives in control of the conservative party listen to each other, and their preferred media myrmidons and value their opinions highly, invigorated to defend the beliefs held to be self-evident in the echo chamber.

It doesn’t matter to the right-wing true believers that Australia’s blessedly pragmatic majority has moved on from them on key issues.

The hard right simply rejects the evidence of plebiscite (marriage equality) and ballot box (Longman, Wentworth) – like the climate denialists and anti-vaxers who become more trenchant when faced with scientific facts.

Josh Frydenberg blandly confirms the government will not move from the energy policies it has. It doesn’t matter to this government what most Australians and industry think of those policies – or lack thereof.

There’s a popular school of thought that the Wentworth result would have been even worse for the Liberal Party if Peter Dutton were prime minister. I’m not so sure about that.

It’s a reasonable bet Mr Dutton PM would have had a policeman’s eye for discipline and not have run as shambolic a show as the failed marketing man presently in The Lodge.

Overlook the goofy-Dad persona created for Mr Morrison, and you’ll see his actions since replacing Malcolm Turnbull have been at least as hard right as what you might imagine of Mr Dutton.

Would Mr Dutton have gone so publicly TrumpWorld as Mr Morrison, best demonstrated by flicking a Jerusalem embassy switch out of nowhere?

The best line on the ABC’s Insiders post-mortem was from comedian Tom Gleeson.

“I really like Scott Morrison, I’m enjoying him. He’s like Australia’s relief teacher – he doesn’t look quite right and you know he’s not going to be around long and while he’s in, we can just all muck up.”

I don’t know if that line would have worked as well with Mr Dutton PM.

The Australia Institute’s Richard Denniss tweeted: “It’s as if, when the Liberals take their policy and political advice from Queenslanders like Peter Dutton and George Christensen they struggle to win many votes in Sydney or Melbourne.”

It’s, as if, when the Liberals take their policy and political advice from Queenslanders like Peter Dutton and George Christensen they struggle to win many votes in Sydney or Melbourne #auspol #Wenthworth

That lets the other states’ hard men off far too lightly. Sydney’s Craig Kelly loves a lump of coal as much as any Queenslander.

No, across the country, the Liberal Party’s broad church has narrowed, its meaner prosperity theology emptying the pews, leaving the party in the hands of the sort of fanatics who can steer its peak council to vote two-to-one to sell off the ABC.

That contrasts with the 91 per cent of Australians who “trust” the ABC, making it by far our most-trusted media organisation.

A party of the hard right, committed to smaller government, lower taxes, less social welfare, trickle-down economics and constant opposition, whether in government or out, is out of touch with reasonable Australia.

The core of Mr Morrison’s Saturday night sermon can be translated:

“We believe in a fair go for those who have a go.” (Those making money deserve to make more money.)

“We believe that the best form of welfare is to have a job.” (Welfare should be cut back.)

“And we believe this, you don’t rise (sic) people up by bringing others down.” (Taxation is bad and progressive taxation is particularly evil.)

“My message to Bill Shorten is you will never lead a country you want to divide.” (Um, when telling a porkie, tell a big porkie. Not since 1975 have our politics been as divisive as that witnessed under the Abbott-Turnbull-Morrison leadership.)

There were and are plenty of people saying key electorates are waiting for this narrower, more doctrinaire Liberal Party with baseball bats.

I think they’re wrong. On the evidence of Wentworth, they’re machetes.