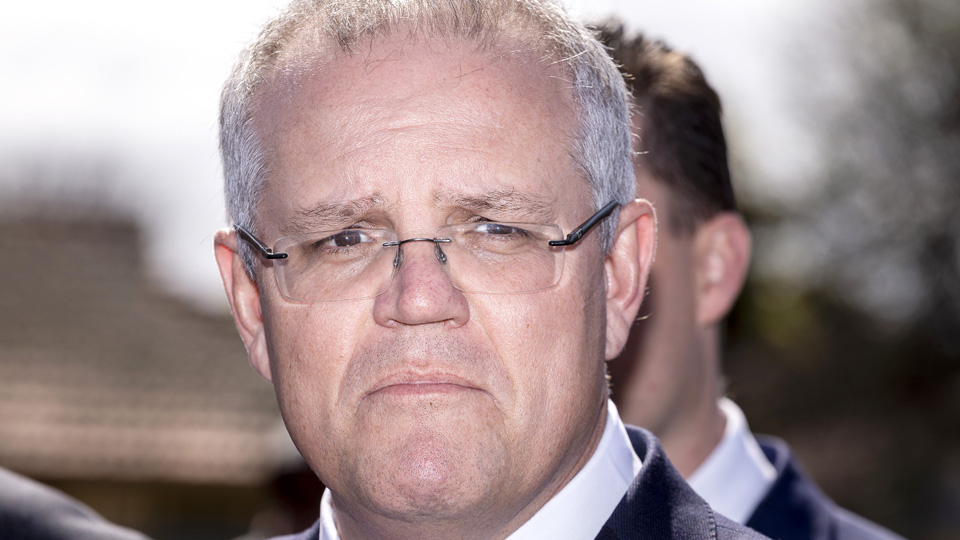 Prime Minister Scott Morrison speaks to the media in the Melbourne suburb of Frankston on Sunday. Photo: AAP

Scott Morrison has suffered another dismal poll result as he prepares to face Parliament for the first time as prime minister.

Sunday’s Newspoll, the second since he took power, confirmed the horror numbers of the first. The poll again put Labor, on a two-party basis, at 56 per cent to the Coalition’s 44 per cent.

This meant the government could expect to lose 21 seats.

The only good news for Mr Morrison was that he had seized the ‘preferred prime minister’ title, with a rating of 42 per cent to Bill Shorten’s 36 per cent.

It was the 40th straight Newspoll loss for the Coalition, with no expected ‘honeymoon’ period for its new leader. Rather than improve the party’s chances, the removal of Malcolm Turnbull had, according to the poll, added five points to Labor’s two-party winning margin.

With those numbers fresh in his mind, Mr Morrison will face his first question time on Monday as leader.

The two major parties have not squared off since August 22, in the middle of the leadership coup.

Since then, Malcolm Turnbull has quit. His deputy Julie Bishop has gone to the backbench. And the man who instigated the revolt, Peter Dutton, remains on the frontbench, but under siege from all sides.

In the intervening weeks, Mr Morrison has ascended to The Lodge, rejigged his ministry, backflipped on lifting the pension age, and gone on a media blitz that culminated in an appeal to the legacy of party founder Robert Menzies.

When Mr Morrison takes his place at the despatch box as leader, he is likely to face an onslaught from Labor.

The opposition could attempt to move a no-confidence motion in the government, as it did in Mr Turnbull’s last days. But it is unlikely to carry.

Without Malcolm Turnbull, who has quit his Wentworth seat, and not counting the speaker, who doesn’t vote unless there is a tie, the government now has 74 votes to Labor’s 69, with another five crossbenchers.

If every member of the lower house attends the vote, and every member of the crossbench votes with Labor (an unlikely outcome), the result would be tied at 74 to 74. The speaker, the Liberals’ Tony Smith, would then presumably vote with the government and any no-confidence motion would fail.

Peter Dutton, the man who triggered the spill only to lose to Mr Morrison, will also be in the crosshairs of Labor and the Greens. Adam Bandt, the only Green in the lower house, has threatened to move a no-confidence motion in the minister.

Mr Dutton faces an extraordinary list of accusations, chief among them the fact he granted two visas to European au pairs after requests for help from people he may have had connections to – one of them a former police force colleague, the other a powerful public figure, AFL boss Gillon McLachlan.

Bill Shorten opened his speech to the Tasmanian Labor conference on Sunday with a jab at the au pair saga.

“It’s rare for [my wife Chloe and I] to get away, just the two of us, because you know you’ve got to get somebody to mind the kids, and in case you hadn’t heard, there’s a national shortage of nannies,” he joked.

Then there is the question of whether Mr Dutton is disqualified from sitting in Parliament because two child care centres his family trust is invested in received Commonwealth funding.

Labor has signalled it will push hard on this point, as a letter has emerged proving one of the child care centres had a written funding agreement with the Commonwealth for the hiring of a special needs teacher.

Finally, there are allegations Mr Dutton’s supporters bullied female Liberal MPs into voting for him in the failed spill. Ms Bishop, Julia Banks and Kelly O’Dwyer are the most high-profile Liberal women to confirm publicly that bullying and intimidation were used during the spill.

Prime Minister Morrison may also face awkward questioning about the resounding defeat of the Liberals in his home of New South Wales, at the state by-election in Wagga Wagga on Saturday.

That seat had been held by the Liberals for 61 years. It now, according to ABC election analyst Antony Green, will fall to an independent. Premier Gladys Berejiklian partly blamed the loss on the chaos in Canberra.

And then there is energy policy, the issue that brought on the spill.

A new minister, Angus Taylor, will answer for the energy portfolio. Mr Morrison has dubbed him the ‘Minister for Keeping Energy Prices Down’.

His predecessor in the role, Josh Frydenberg, now deputy leader, admitted on Sunday he was “disappointed” to confirm the National Energy Guarantee, with its policy mechanism to curb carbon emissions, had truly been dumped.

It made for a rapid-fire exchange on the ABC’s Insiders program.

Barry Cassidy: “You got the policy through your party room three times.”

Josh Frydenberg: “We did.”

Josh Frydenberg: “We did.”

Josh Frydenberg: “And it is.”

But the question put most often to Mr Morrison in the days since he replaced Mr Turnbull has been: ‘Why?’ Why did the party need to replace its leader?

On Monday, Mr Morrison will have a chance to explain.

Poll blow for Morrison on eve of first question time