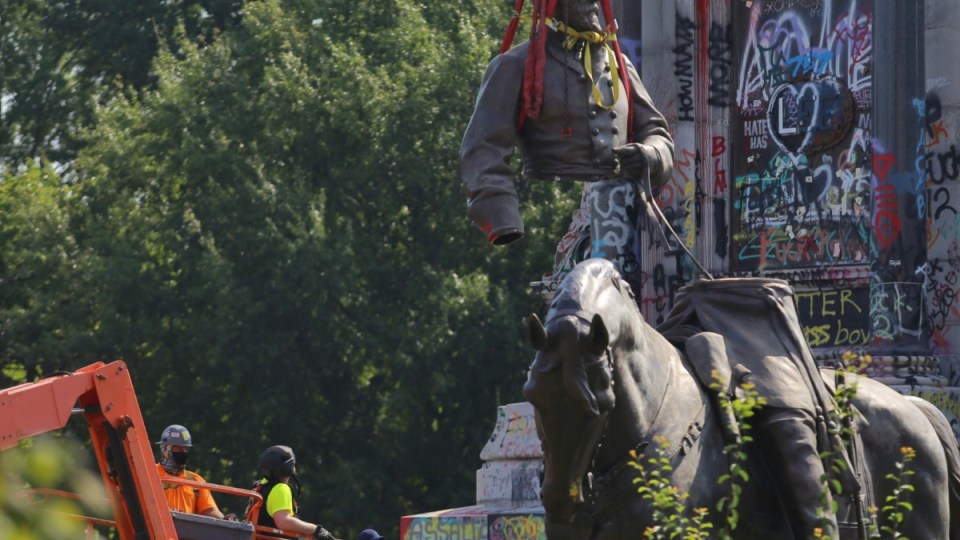 The statue was disassembled soon after its removal. Photo: Getty

A rust-coloured 1875 almanac, a cloth envelope and a silver coin have been found in a time capsule that lay hidden beneath a towering statue of Confederate General Robert E. Lee in Virginia for more than 130 years.

As intriguing as the water-damaged items were, they were not what many were expecting to see after state conservators spent five hours gingerly prying the time capsule open. Even the mortar-encrusted lead box was a surprise.

Historical records led many to believe the capsule held dozens of objects related to the Confederacy as well as a picture of deceased President Abraham Lincoln. But in just a few minutes, its contents were revealed and the items were few.

There were three books total. Besides the almanac, there was a tattered book with a pink cover that appeared to be an edition of The Huguenot Lovers: A Tale Of The Old Dominion by Collinson Pierrepont Edwards Burgwyn.

There also appeared to be a pamphlet of some kind that made reference to water power facilities for the city of Manchester, a community south of Richmond.

Devon Henry, the contractor who took down the Lee statue and is continuing to work on removing the pedestal in Richmond, said there could be a second time capsule yet to be found.

“I’m as intrigued as everyone,” he said, as conservators worked to open the capsule.

“It was a huge relief to find it. Secondly, we need to see if it’s what we are looking for.”

The day after the Lee statue was removed in September, work crews spent more than 12 hours searching for the time capsule in the base of the 12-metre-tall pedestal but were unable to locate it.

A time capsule was eventually found on Friday (US time), embedded six metres high in the pedestal.

Mr Henry said his work crew was still being extra careful given that the container opened on Wednesday did not match the description of the time capsule they were expecting.

A newspaper article from 1887 – the year a time capsule was embedded in the pedestal – suggested that the capsule contained Civil War memorabilia and a “picture of Lincoln lying in his coffin”.

Records from the Library of Virginia also suggested that 37 Richmond residents, organisations and businesses contributed about 60 objects to the capsule, many of which are believed to be related to the Confederacy.

That time capsule was believe to be a copper box measuring 35-by-35-by-20 centimetres, larger than the box pulled from the pedestal last week.

Besides there being far fewer objects, the capsule removed Friday measured 10-by-20-by-30 centimetres and was made of lead.

“We were really surprised to find something lead,” said Julie Langan, the director of the state’s Department of Historic Resources.

The department’s team will catalogue the artefacts and expects to have more details on their makeup and their possible origins in a few days.

The books will be put in a freezer to avoid mould and the silver coin, which started to tarnish when the box was open, will be kept in a dry place to limit deterioration.

The Lee statue was erected in 1890 and was long seen as a symbol of racial injustice in the former capital of the Confederacy.

Its removal in September came more than a year after Virginia governor Ralph Northam ordered it following protests that erupted after the police killing of George Floyd in Minneapolis.

Market Wrap: Post-election relief buoys the ASX as gold looks set to hit bottom
Here are some of the memes that got us through 2021
Today's Stories