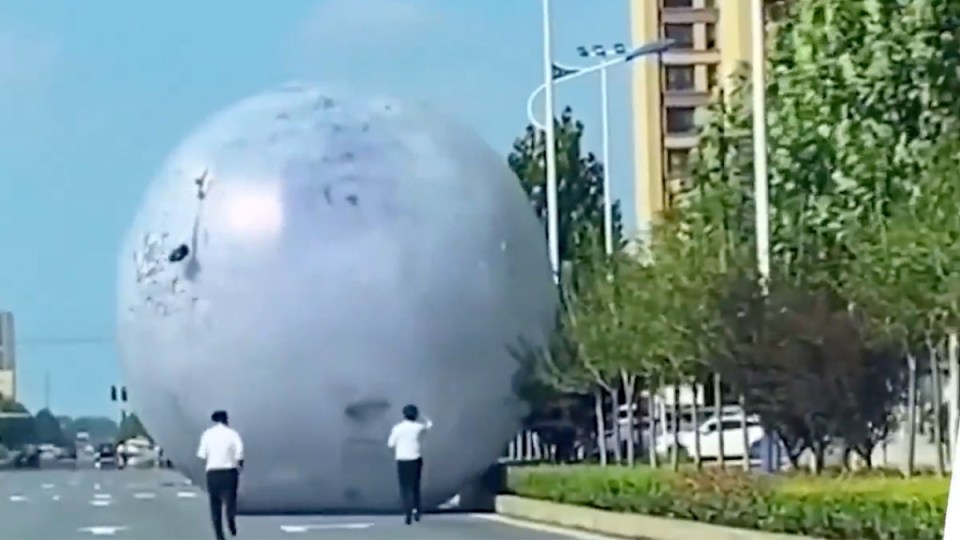 A moon escaped from a festival and was ‘unstoppable’. Photo: Twitter

Great news reader, it is once again the weekend!

While reporting on the many serious incidents that went down since last Saturday (who saw an earthquake coming?!), we realised a bit of light relief was in order.

Our reporters have been scouring social media all week looking for video evidence that the world is still turning and people are still as wacky and comical as ever.

We hope these clips make you smile like the professional grinners in toothpaste adverts.

MMA-superstar Conor McGregor turned heads with his wonky ceremonial first pitch at a Chicago Cubs game during the week. Known for his grit and determination in the ring, the native Irishman wasn’t able to bring his A-game to the mound, drawing comparisons to rapper 50 Cent’s infamous pitch from 2014. Better luck next time, Conor!

Daughter of ’80s-crooner Lionel, Nicole Richie had a fiery start to her 40s! In a video posted to her Instagram, Nicole was seen leaning over her personalised birthday cake, blowing out her candles. Trouble ensued when Nicole’s blonde locks came in contact with the candles, leading to her hair catching fire. The video ends with Nicole and her friends screaming as she eagerly pats down her hair. Her Good Charlotte rocker husband Joel Madden said it best when he quoted Nicole’s Simple Life co-star Paris Hilton’s iconic catchphrase in the comments: “That’s hot.”

A drone delivery company in Canberra had to pause service for customers in one suburb this week, after an angry raven tried to fight for airspace. Wing said the birds get “territorial” during nesting season and none were harmed in the attacks. Apparently, Canberrans have been going wild for drone deliveries in lockdown. Who knew?

To add to the existing apocalyptic feel in Melbourne this week (pandemic and protests considered), Melburnians were awoken at 9:15am on Wednesday with a magnitude 5.8 earthquake. This footage captured of a bird sleeping on a ledge of a building perfectly encapsulated our 30-seconds of sheer panic and confusion. Look at that face!

Moon on the run

Meanwhile in China, residents have been celebrating the Mid-Autumn festival, also called the Moon Festival or Mooncake Festival. During one of the celebratory events in the Henan Province, this giant inflatable celestial being escaped and rolled off. It was reportedly “unstoppable”. Don’t you laugh, it’s not funny – at all. What a hassle. If the incident looks familiar, it’s because this is not the first moon to make a getaway.

Incredible footage has emerged from the Canary Islands this week, as the island of La Palma has been singed by the wrath of the Cumbre Viejo volcano. The flow of magma from the volcano, which erupted for the first time in 50 years, can be seen devastating everything in its path. Drone footage captured the moment a wave of lava enveloped a pristine white swimming pool, the serene water bubbling away as boulders of piping-hot magma torpedo the water.

Here are our top picks for videos of the week