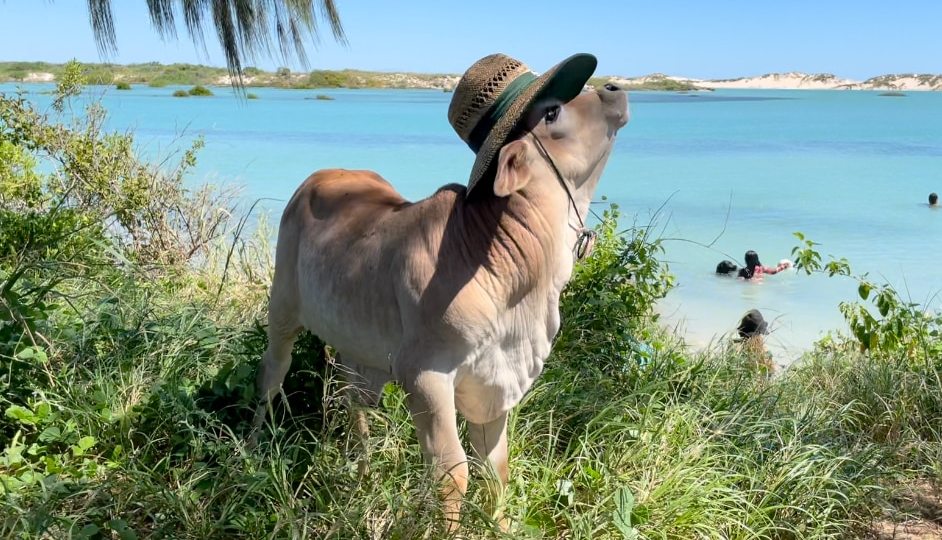 Peanut seems to have been influenced by the six dogs he's growing up with. Photo: ABC Kimberley/Hinako Shiraishi

Near the Western Australian holiday town of Broome is a lagoon where dogs can often be seen swimming around with their owners.

Recently, however, swimmers spotted a small pale brown calf near the water’s edge.

His name is Peanut and he is a Brahman calf named for the little hump on his back.

Peanut, who is two months old, lives in a small, off-the-grid suburb near Broome and shares his home with pigs, chickens, peacocks, six dogs and his owner, Edward Foy.

“As far as the cow is concerned, he thinks he’s a dog,” Mr Foy said.

“He’s still learning who he is and what he is.”

Peanut had a rough start to life before he was rescued from the side of the road.

“The mother was cleaned up by a truck or a car and he was hanging around sniffing the remains,” Mr Foy said.

“He still had the umbilical cord attached to her.”

Every day, Peanut drinks up to 16 litres of “some special calf formula” that is costing Mr Foy more than $250 a month.

But he says Peanut is worth it.

This calf isn’t the first pet Brahman that Mr Foy’s family has owned.

Like others of his breed, Peanut has the potential to grow up to a weight of 900 kilograms.

But Mr Foy says Peanut doesn’t act like a normal bull, which could be a product of his upbringing.

“This one has never seen another cow before, so as far as he’s concerned, he’s a dog and he’s picked up the same personality as a dog,” he said.

“I normally walk him down the beach and he’ll follow me the whole way down while I go for a fish.”

No worries for the future

When Peanut grows older his horns could be dangerous, but Mr Foy said he would feel guilty if he were to remove them.

But he’s come up with a solution.

“I’ll get two pool noodles and stick them on,” he said.

“So when he hits you it’ll feel like soft rubber.”

Mr Foy hopes that he and Peanut can live a long and happy life together.

“Hopefully in the future I can ride him through the bottle shop,” he said.

Peanut the Brahman calf is convinced he’s a dog