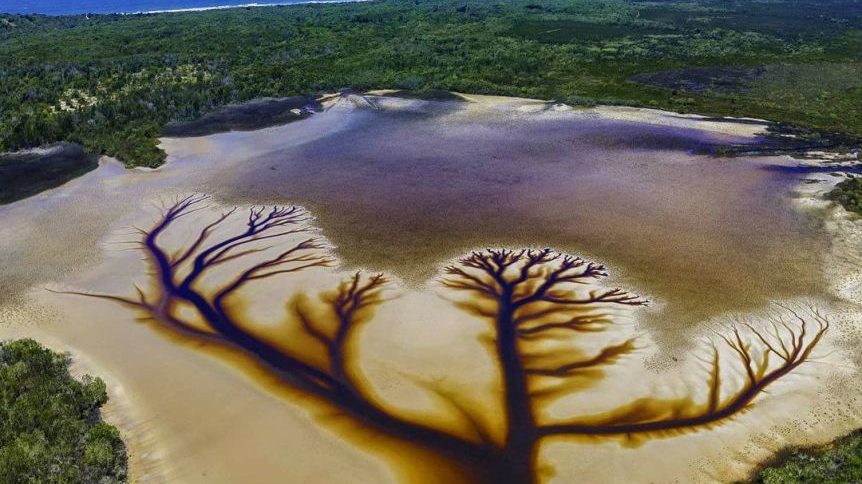 An amateur photographer on the north coast of New South Wales has turned the ordinary into the extraordinary by capturing a series of mesmerising photographs of Lake Cakora at Brooms Head.

Derry Moroney’s recent aerial image has had a huge reaction on social media, with more than 2200 people sharing the image and creating over 230 comments.

“If you were to look at the image you wouldn’t think it was real at first,” he said.

“At the very end of the lake the water runs out and it all spines out into a tree-of-life look.”

Lake Cakora is a lake and lagoon that is intermittently open to the ocean at Brooms Head Main Beach.

Mr Moroney said he was so amazed by the “spectacular” patterns that emerged that he made a habit of returning to the site each fortnight to photograph its transient forms.

“What a total change it has made again,” he wrote of one of the images.

“Now it has the feel of a golden fire tree with heat waves all around it.”

Mr Moroney said he began taking aerial photographs of the lake about six months ago after a big rain event.

His tree of life image was taken after several days of consecutive storms in the Clarence Valley.

“The water is soaked by tea tree oils, hence the brown colour, and the extra water flowing out of the lake has created this stunning natural masterpiece,” he wrote.