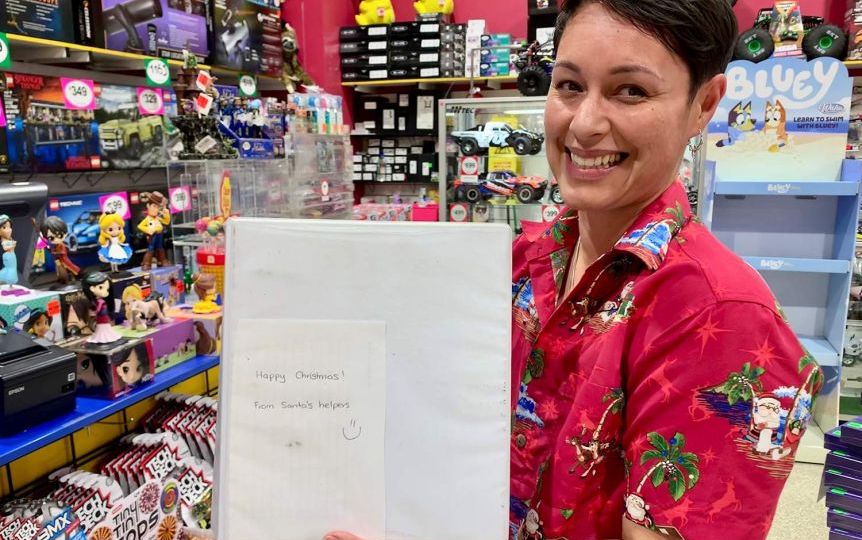 An anonymous ‘Santa’s helper’ has paid off all the lay-bys at a toy store on Queensland’s Gold Coast, totalling more than $16,000, with customers surprised and emotional with the gesture of Christmas goodwill after a tough year.

Staff at Mr Toys Toyworld at Burleigh Waters said a woman came into the store with two others at lunch-time last Thursday and paid the outstanding balances on more than 80 lay-bys in the lead-up to Christmas.

Employee Maddie Gillespie said she had never witnessed such an act of generosity.

“We were all speechless – it was a really crazy moment,” Ms Gillespie said.

Employee Rachael Thompson said she had to console parents who had been overcome with emotions when they were informed about the stranger’s kindness.

“We wish she could know how grateful people are,” Ms Thompson said.

Single mum of two Alanah Loadsman had put down a $60 deposit on a $300 dollhouse when she called the store on Tuesday and learnt the gift for her seven-year-old daughter had been paid off in full.

“It’s helped massively for a single mum – so generous I almost cried,” she said.

“It goes to show there are so many good people out there – it’s definitely made a bad year into a good year, that’s for sure.

“I would give her a huge hug and say thank you so much.”

As for the identity of the donor and her two friends, staff would only say the trio looked like they were aged in their late 20s or early 30s.

“We didn’t get their names – all they said is to tell people it was Santa’s helpers,” Ms Gillepsie said.

Ms Gillespie said the generosity had not ended with the lay-bys.

She said the trio returned to the shop about an hour later and gave gifts to all the staff members.

The women then returned that evening and picked one lucky customer and walked around the shop with him as he selected toys.