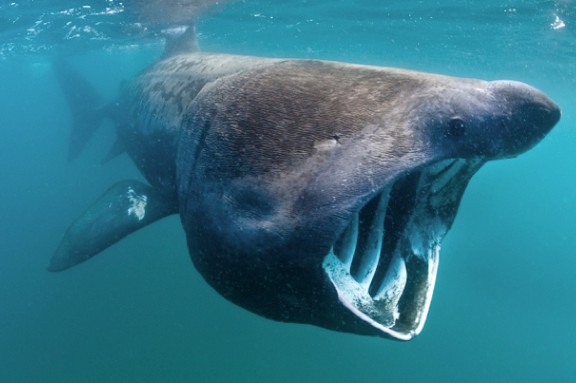 A bizarre-looking basking shark has reappeared as a stroke of luck revealed what scientists believe to be an historic, oceanic crossing.

The female shark, which was tagged with a satellite transmitter at Malin Head on the northernmost point of Ireland, just happened to be photographed three years later.

A recent study published by marine biologists at Queen’s University Belfast and Western University in Ontario, Canada says the crossing is from Ireland to North America is just the second time such a transAtlantic crossing has been recorded.

The only previous evidence of a transAtlantic crossing came in 2008, when another female tagged with a tracking device swam from the Irish Sea to the coast of Cape Cod, Newfoundland.

After a few months after being fitted with its tracking device, the equipment went dark.

“That’s not unusual,” Jonathan Houghton, one of the study’s lead researchers told CNN.

“If you put electronics in the sea, some things just glitch up after a while.”

Then, out of the blue in June 2017, the shark was photographed by an underwater photographer more than 4600 kilometres away, off the east coast of North America.

The photograph was circulated throughout Europe before eventually making its way to the research teams.

It was then they noticed the shark’s no-longer-functioning tracking device and a small buoyancy aid fitted only to one shark.

“Over 1500 individual sharks have been equipped with either visual ID or satellite tags in the Atlantic to date, leading to just a single record of transoceanic movement – until now,” study co-author Emmett Johnston said.

“This new evidence offers invaluable information to help us better understand the movements of this endangered species within an international context.”

As well as being one of the largest sharks in (second only to the whale shark) the basking shark is also one of the oddest in appearance.

The basking shark has several evolutionary adaptations for filter-feeding plankton, its main diet, including a greatly enlarged mouth and its highly developed gill rakers.

It has a conical snout and gill slits that extend around the top and bottom of its head.

Perhaps its oddest feature is the structured cartilage inside the shark’s mouth that appears like ribs and serves to support its gaping mouth when feeding.