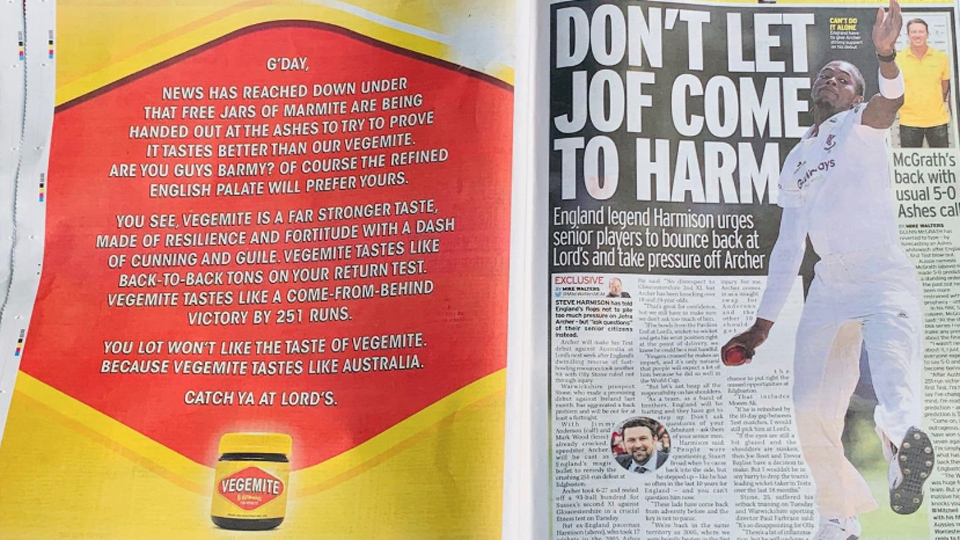 Free jars of Marmite were handed out at the first Test at Edgbaston in a not-so-subtle attempt by the English toast-topper to stoke rivalry between supporters of the twin yeasty spreads.

But, led by Tim Paine and amid heroics from Steve Smith, the Aussies were undaunted. Now Vegemite has taken out a full-page ad in a British tabloid to throw a few underarms of its own celebrating the tourists’ crushing comeback win.

We wish @Marmite all the best but don’t expect Aussies to be bowled over by their antics at the cricket. So, we took action by running a full page ad in the @DailyMirror … Catch ya at Lord’s! #TastesLikeAustralia #Vegemite #Ashes pic.twitter.com/jMRJkEi63b

According to the ad in the Daily Mirror, it is only natural that those Down Under prefer the taste of the Aussie icon to that of its British ancestor.

“Vegemite is a far stronger taste, made of resilience and fortitude with a dash of cunning and guile,” the ad brags.

The dig came in response to the high-profile attempt by Marmite to get Aussies to try the British spread. It held the Australian market captive for 20 years before supply disruptions led chemist and food technologist Cyril Callister to create an Antipodean replacement.

The free jars of Marmite handed out in Birmingham were even labelled “Marmy Army”, a provocative reference to the self-labelled Barmy Army England fans that faithfully follow their team around the globe.

With both Vegemite and Marmite made from yeast extract leftover from beer brewing, the real difference between the two might be as fine as a glance down the leg side. But those raised on one rarely come to prefer the charms of the other.

“Of course, the refined English palate will prefer yours,” said Vegemite, which returned to Australian hands in 2017 after being bought by Bega Cheese.

With fans of either toast spread or cricket teams unlikely to switch sides, battle will resume on Thursday (British time) with the start of the second Test.

“Catch ya at Lord’s,” the ad breezily concludes.

‘Tastes like Australia’: Vegemite brings out the brags in mighty Ashes sledge