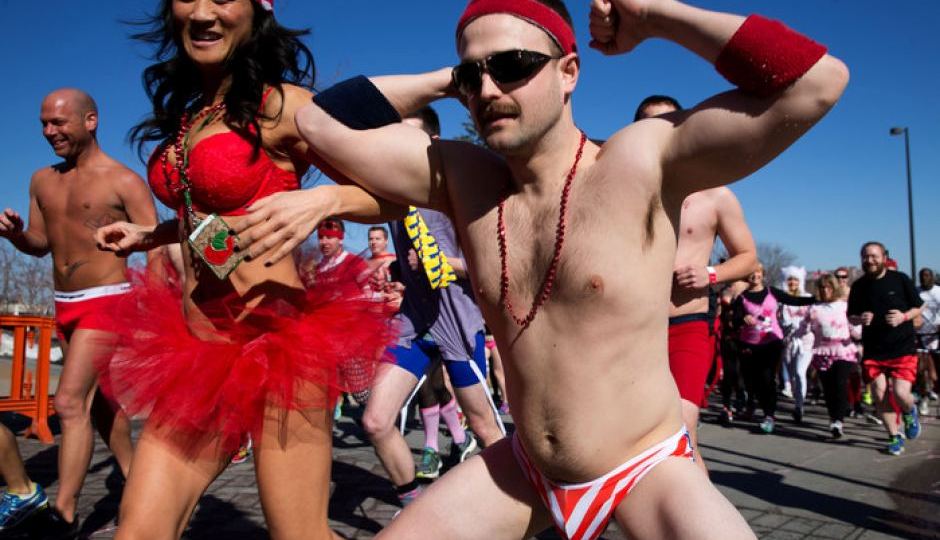 People are encouraged to strip down to their undies or to wear crazy outfits. Photo: Children's Tumour Foundation

Thousands of Australians from Hobart to Darwin stripped down to their jocks at the weekend as part of a unique fundraiser to support those suffering from an often misunderstood, lesser-known genetic disorder.

Neurofibromatosis, commonly known as NF, is a genetic condition that can cause problems ranging from light birthmarks and bumps on the skin to tumours in the brain, spine and eyes.

Cupid’s Undie Run is organised by Australia’s leading neurofibromatosis charity, the Children’s Tumour Foundation, and is held on the Valentine’s Day weekend in 17 different cities across the country each year.

“People with neurofibromatosis can become disfigured, so the idea behind being in your undies is to feel how they might feel every day being judged for the way they might look,” she said.

“The message behind our campaign is that — stripped down — we’re all the same.”

For those who do test positive to the condition, the future is hard to predict.

Sufferers develop tumours called neurofibromas that form around the nerve cells both on the skin’s surface and deep inside the body.

Some experience few or no health problems, while for others it can be life-threatening or debilitating.

“Any cell within the body can grow tumours so this includes the spine, the brain and the skin. Most of the time they are benign but they can become malignant,” Ms Skelton explained.

“We have kids who have lost limbs because of tumours.

“It can also affect a bunch of nerves at one time and can be disfiguring.

“There is no absolute way of knowing how it might affect you if you’re diagnosed.”

Ms Skelton said there were three forms of neurofibromatosis known as NF1, NF2 and Schwannomatosis, which affected one in 2500 children.

“It’s the most common genetic disorder but despite this nobody’s really heard of neurofibromatosis,” she said.

“There are so many health complications associated with it.”

Parents with the condition have a 50 per cent chance of passing it on to their children but it can also develop suddenly without any family history.

“My daughter is three and she has neurofibromatosis from a spontaneous mutation,” Ms Skelton said.

“She has two tumours compressing her spine and sadly there’s no effective treatment for tumours and no cure, so it’s an issue close to my heart.”

Far north Queensland mum Juanita Busch didn’t realise she had neurofibromatosis until a nurse noticed classic signs of the condition when she was in hospital during her first pregnancy.

The disorder has caused Ms Busch to develop several lumps underneath her skin and several pigmented birthmarks.

“It can cause seizures, blindness, and tumours so what I’ve got is nothing compared to what some suffer with,” she said.

The mum of three said only one of her children had also shown signs of the disorder but has not yet been given an official diagnosis.

“My daughter has got the brown spots [on her skin] but she’s still growing,” she said.

“More [serious symptoms] may pop up but we just take each day as it comes.”

Disorder can be isolating for parents

“This event has made people come forward to let others know they have got the diagnosis, so it’s a good thing if we all come together,” she said.

“Darcy was diagnosed before his first birthday after he displayed some common symptoms.”

“Unfortunately, neurofibromatosis is very unpredictable and tomorrow could be a different story,” she said.

“We have to see a lot of health professionals, he’s had MRI scans, he has to see an eye doctor, physios, occupational therapists, speech therapists and podiatrists so it’s very time consuming.”