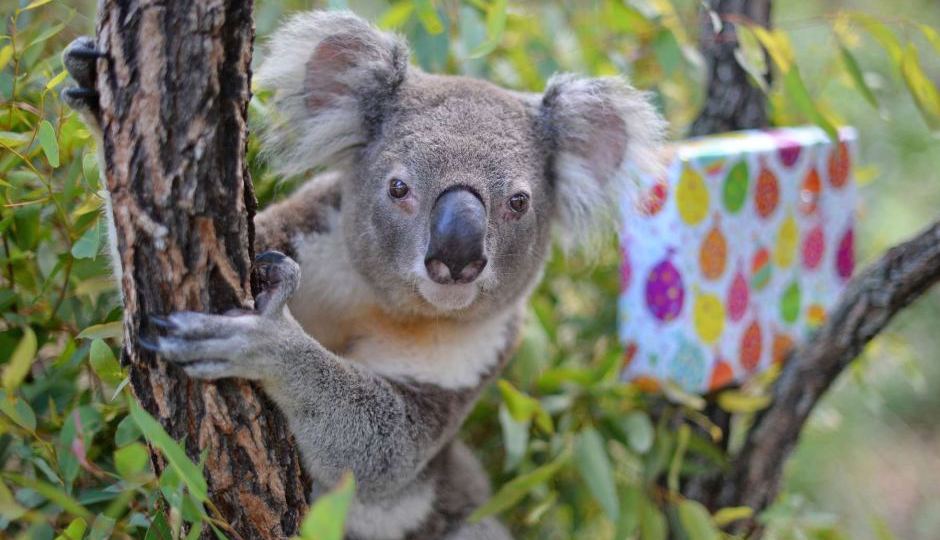 Lawson the koala has just celebrated his sweet 16 but he’s no spring chicken.

The native marsupial has already lived a longer life than many in the wild could ever hope for.

He was born in captivity at Australia Zoo in 2002, the same year his first handler Amanda Cole started caring for native marsupials at the wildlife park.

“I started at the zoo when Lawson was just a newborn joey in his mum’s pouch, so I was able to watch that development with him and his mum and participate with his handling and training as he grew up,” she said.

“I’ve got a real soft spot for this guy.”

Lawson spent his youth cuddling tourists to spread awareness about koala conservation, but these days he lives a relaxed, semi-retired life in his “bachelor pad” enclosure.

Ms Cole, who is now the zoo’s curator and operations manager, said Lawson celebrated his 16th birthday surrounded by his closest handlers.

“We threw him a little bit of a party, offered him some really yummy leaf species to eat and just gave him a lot more attention just to celebrate the occasion.

“As a young koala Lawson was always really relaxed, but as he’s aged he’s become a little more set in his ways so he does prefer to have the standard routine day to day.

“Once he gets that leaf that’s the happiest he can be.”

Koala lifespan can double in captivity

At 16, Lawson is considered to be in his twilight years.

“I think you’d say he was in his late 80s compared to a human,” Ms Cole said.

Koalas in the wild live for between 10 and 12 years.

Without facing the threat of predators or food scarcity, koalas raised in captivity can survive for another decade.

Port Macquarie’s Koala Hospital claims to hold the world record for the oldest-living koala with Birthday Girl, a 25-year-old female koala that died in 2011.

However the Guinness World Records website lists 23-year-old Sarah — who died at Queensland’s Lone Pine Koala Sanctuary in 2001 — as the oldest in captivity.

“We have had female koalas that have lived up into their 20s and we’ve had a male koala that’s lived to the age of 19,” Ms Cole said.

“With the way that [Lawson] is going at the moment, we feel pretty confident that he’s still got a few good years left in him.

“For his age he is in exceptional condition.”

Despite living on his own and valuing a stable routine in his old age, Lawson still accompanies his handlers out into the park every now and again to help them spread messages about koala conservation.

Last year the World Wildlife Foundation warned koala populations were at risk of being wiped out in Queensland and New South Wales if bushland clearing continued.

The koala is listed as vulnerable in Queensland, NSW and the ACT.

“Steve always believed if you can get people up close and personal with animals, they’d fall in love with them and therefore they’d want to save them,” she said.

“There would be a huge number of people that Lawson connected with and had them walk away feeling a little bit different about Australian native wildlife.”

Handlers make sure koalas finishing their conservation work and entering retirement have a comfortable life, including pre-mashing their food and rearranging their enclosures.