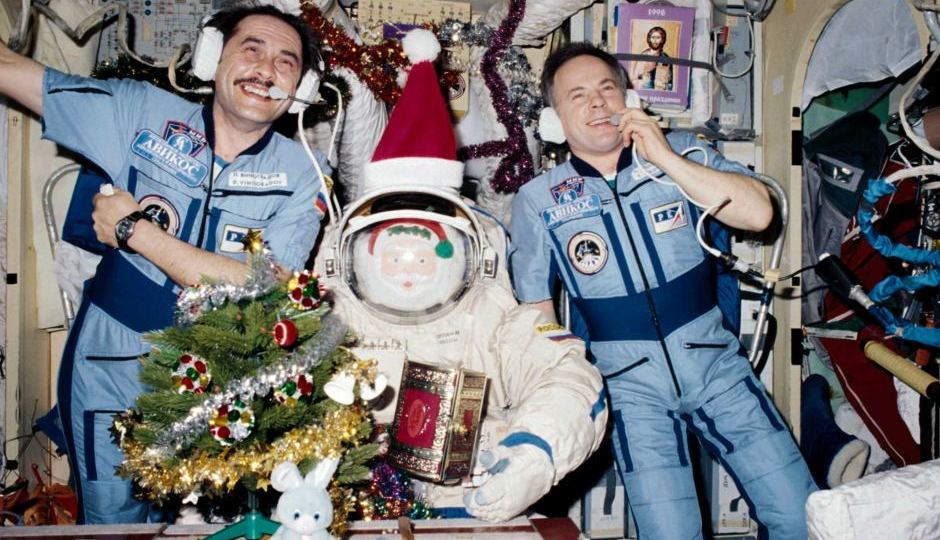 Christmas is a time of celebration in space as much as it is on Earth. Photo: NASA

On Christmas Eve 1968 they sent photos of Earth rising from the Moon and a recorded message.

But it was not quite as glamourous as they tried to make out, according to Alice Gorman, a space anthropologist at Flinders University.

“There’s three men stuck in a tiny capsule orbiting the Moon, and this was in the early days of space toilet technology, you might say,” she told ABC Radio.

“It didn’t work quite as planned and there was a bit of an accident and the capsule was a rather fragrant place.”

Following the Apollo 8 mission, the United States set up a space station called Skylab which orbited Earth from 1973 to 1979.

“The Skylab’s four crew, this is in the early ’70s, celebrated one Christmas by getting the tin cans their food came in and taking them apart and making them into quite a gorgeous Christmas tree,” Dr Gorman said.

“It was recycling. It’s exactly the kind of thing that now on Earth we place a lot of importance on.”

The International Space Station (ISS) was put into orbit in 1998 and has been continually crewed since 2000.

“They’re quite lucky, they get to have two celebrations,” Dr Gorman said.

“They seem to love Christmas up there.

“Every year they put on costumes and have little stockings and Christmas trees and presents and try to have some sort of special food.”

Space crews are kept busy, with a tight schedule of science experiments, exercise to keep their bodies working in low gravity, and maintenance to the station.

“They’re living inside a big experiment itself, there’s no separation between their working lives and their non-working lives,” Dr Gorman said.

“But they do get some time off on Christmas Day.”

Each crew member is allowed to bring a small box of personal items with them for their stay on the ISS.

“They will often include little Christmas treats if they know they’re going to be in orbit over the Christmas period,” Dr Gorman said.

“Food’s a big deal in space because the environment’s so different.”

In more recent years it has become a tradition for astronauts to record video messages, often reflecting on what Christmas means when you are more than 300 kilometres above your families and friends.

A brief history of humans spending Christmas in space