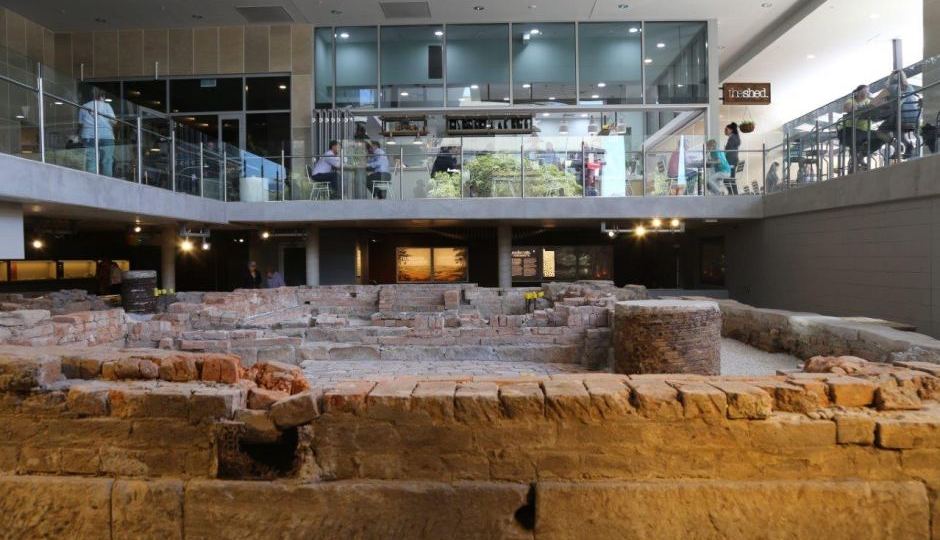 The ruins of the Wheatsheaf Hotel, built in the early 1800s, now lay open below a cafe. Photo: ABC

Evidence of the existence of one of Australia’s oldest pubs, dating back over 200 years, has been uncovered in Parramatta in Sydney’s west.

Archaeologists have spent nearly 10 years working at the site located in the heart of the Parramatta CBD.

There they uncovered the cellar of what was known as the Wheatsheaf Hotel, believed to have been built in 1801, along with the remains of an 1800s convict hut and a wheelwright’s workshop, where carts and wagons were once made and fixed.

Lead archaeologist Dr Ted Higginbotham said they did not expect to find the site it such good condition.

“This is the first time that the physical remains of a convict hut have been put on display,” he said.

“The archaeology reveals the contribution of many early settlers to the development of Parramatta. The convict huts stand in contrast with Old Government House in Parramatta Park.”

The pub, on the corner of Marsden and Macquarie streets, would have been one of the first major landmarks people saw when they came to Parramatta.

The convict hut was built around the early 1800s and the workshop was added to the hut in the 1820s before being demolished to make way for a brick cottage.

Among the discoveries include a well once used to access scarce drinking water, a baker’s oven along with dinner plates, children’s toys and bottles.

“We’ve got all that depth of stratigraphy [the different layers of earth] which allows us to differentiate each period of occupation,” Dr Higginbotham said.

“The artefacts that go with each period can be separated out in much greater degree than you can do elsewhere so you can look at the assemblage of artefacts for each period and tell details about their standard of living, literacy and things like that and whether they could afford to build and own a house rather than just be a rental.

“The baker’s oven, the wheelwright’s workshop, the later brick cottage could all be matched with the known historical occupants of the site.”

The archaeological discoveries were today unveiled as part of a centre connected with a new apartment complex.

One of the visitors to the centre was Ralph Millard, whose great grandfather once lived in the cottage before it was demolished in the 1950s.

He told the ABC it brings back memories from when he used to visit.

“It was dark, it was musty, as old houses are. It was pretty quiet in the street. There was a courtyard out the back you used to play in as a kid,” he said.

“Australia has a really nasty habit of wiping out the past but there’s still a bit left.”

The centre is open to the public seven days a week.