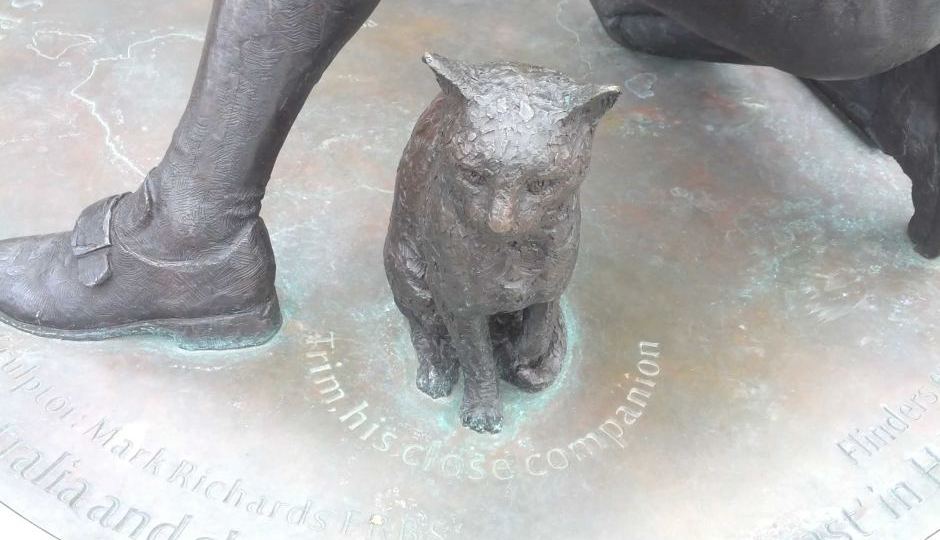 Trim has been immortalised in four statues, two in Australia and two in England. Photo: Wikimedia Commons: Camloo

Matthew Flinders literally put Australia on the map, but he didn’t do it alone – he was helped by a cat called Trim.

Trim was born in 1799 on board HMAS Reliance on Flinders’ voyage from the Cape of Good Hope to Botany Bay.

He was an adventurous spirit from the beginning; early on Trim fell overboard and had to swim to the boat and climb up a rope to safety.

Rachel Franks from the State Library of NSW said it was this act of bravery that caught Flinders’ attention.

“I think that he always had that determination,” she told ABC Radio.

“I think Matthew quite liked his spirit and I think Trim quite liked [Flinders] as well.”

Flinders gave the small black and white cat the name Trim after the butler in Laurence Sterne’s book Tristram Shandy.

He described his feline friend as:

“One of the finest animals I ever saw … [his] robe was a clear jet black, with the exception of his four feet, which seemed to have been dipped in snow, and his under lip, which rivalled them in whiteness. He had also a white star on his breast.”

When Flinders undertook a mission to circumnavigate the southern continent in the ship Investigator, Trim was by his side.

Trim was said to be a cheeky cat, who would join the captain at his table and try to swipe food off the forks of others as they ate.

“He only stole food once,” Ms Franks said.

“Apparently there was a large piece of mutton that was a bit too tempting and he teamed up with another cat – they didn’t get very far.”

Trim would not have been the only cat on board Investigator; most ships kept a few cats onboard to catch rats and mice that could cause havoc by eating supplies or gnawing on ropes.

But Trim’s personality appears to have been bigger than the other ship cats.

Flinders even wrote a biography for his constant cat companion as well as other tributes and poems.

Trim was with Flinders when he was shipwrecked on the Great Barrier Reef.

They were trying to return to England on HMS Porpoise when they ran aground and the crew, including Trim, had to swim to safety on a small island.

Trim was said to have helped keep the stranded men’s spirits up while they waited seven weeks for rescue.

And this was not to be the last of Trim’s adventures; he again took to the high seas with Flinders as they tried to get back to England.

Flinders made a stop at the French colony on Mauritius, needing repairs and supplies to continue.

But as France and England were at war, Flinders was detained by the island’s governor for six-and-a-half years under house arrest.

Trim stayed with Flinders the whole time — but he was allowed to wander the island.

During one of his outdoor explorations in 1804, the cat failed to return, much to the distress of Flinders.

He believed Trim had been eaten by a hungry slave but this was never proven.

Flinders wrote about the demise of his friend:

“Thus perished my faithful intelligent Trim! The sporting, affectionate and useful companion of my voyages during four years.

“Never, my Trim, ‘to take thee all in all, shall I see thy like again’, but never wilt thou cease to be regretted by all who had the pleasure of knowing thee.

“And for thy affectionate master and friend, he promises thee, if ever he shall have the happiness to enjoy repose in his native country, under a thatched cottage surrounded by half an acre of land, to erect in the most retired corner a monument to perpetuate thy memory and record thy uncommon merits.”

Flinders never got a chance to erect a monument to Trim, but four statues now stand as memorials to the adventurous cat – two in England, two in Australia – and his story lives on.

Tales of Trim, the first cat to sail around Australia