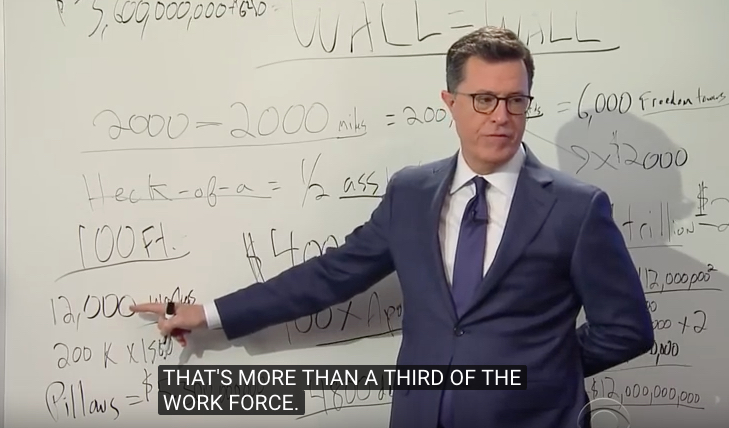 US satirist Stephen Colbert appears to have demolished President Donald Trump’s wall in one fell swoop of mathematics.

On his Late Show, Colbert assembled a few experts to discuss the real cost of the wall proposed by the President along the USA’s southern border with Mexico.

They calculated the wall would cost as much at $US2 trillion ($A2.6 trillion), take more than 700 years to build and cost almost 5000 lives.

Colbert took literally the statement from Mr Trump about the wall being “a heck of a lot higher” than the 80-foot-high ceiling of the presidential debate space from 2016.

His panel of experts determined a “heck of a” would be the equivalent of a “1/2 a–e load”, which would make the wall about 100 feet high.

That would require 200 million cubic yards of concrete, according to Mr Dobrova, while Ms Hobson said it would cost $US400 billion ($A530 billion) just to pay for that amount of concrete.

That’s without taking into account the cost of workers, excavation, de-watering, portable concrete plants, among other things — bringing the total to about $US1 trillion ($A1.3 trillion).

They then agree to add another trillion dollars, as they believe it’s better to build a highway along the wall.

“Because what is a highway if not a wall on its side?” Colbert noted.

But as Mr Trump also claimed the wall will be “beautiful”, Colbert asked for a cost of decorating the wall.

Colbert added that 400,000 workers died building the Great Wall of China. On that basis, Ms Hobson concluded that given the advances in construction technology and safety, she estimated around 100 people a month could die in building the wall.

At four years to build, that would mean about 4800 people could die.

“Obviously, nobody wants that, we just have to be realistic here,” Colbert noted drily.