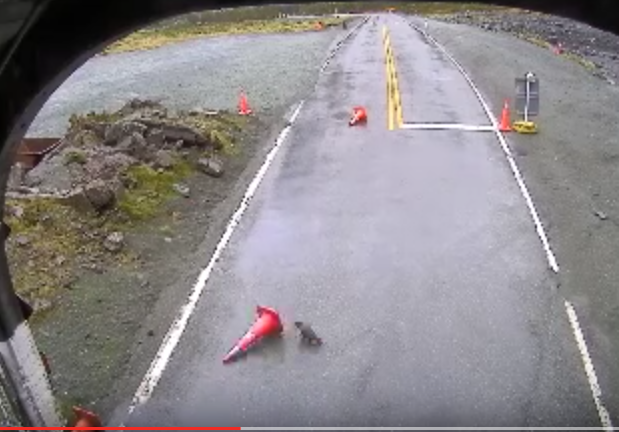 The kea would move the cones out of sight of cars. Photo: YouTube.

A road authority in New Zealand was a little puzzled to find their traffic cones ending up in odd places in recent weeks – until they checked their CCTV footage.

The NZ Transport Agency’s Milford Alliance working near Milford Sound in southwest of the South Island had assumed that the mysterious, moving cones was the work of a prankster.

And it was — just not of the human variety.

After checking their cameras placed at the entrance to the famed Homer Tunnel, the agency found that keas, NZ’s larrikin mountain parrot was behind the ruse.

The keas were in fact moving the cones, but each time craftily assuring that no one was looking.

The agency speculated that the irrepressible and hugely social birds were playing on the road to get the attention of humans, in the hopes of being fed.

On the original YouTube post, Kevin Thompson, manager for the Milford Alliance said: “We think the keas listen for the cars in the tunnel and move the road cones between the streams of traffic.”

The alliance will trial heavier road cones to keep the keas safe and deter them from playing in traffic.

The footage of the kea hijinks

The kea is a notoriously cheeky bird, known in NZ for destroying rubber seals, aerials and wiper blades on vehicles, ski boot linings and anything else it can lay its beak on.

The cheeky Kiwi bird that had the humans fooled