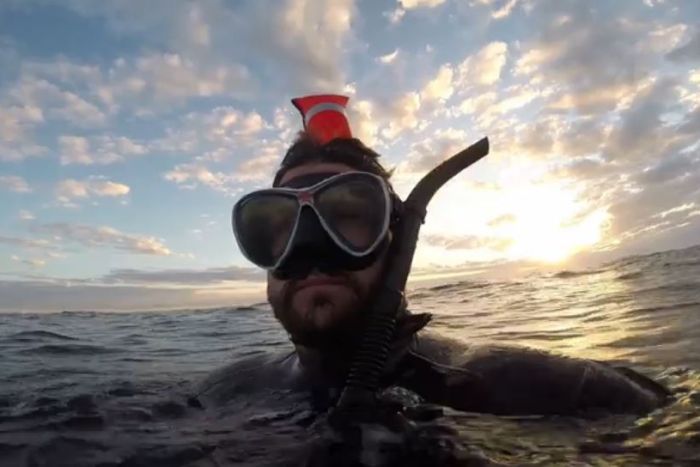 A scuba diver who spent more than six hours drifting off the south-east Queensland coast after becoming separated from his group will not let the experience keep him out of the water.

Jacob Childs was the subject of an extensive air and sea search off the coast of Bundaberg on Tuesday afternoon.

The 30-year-old, who considers himself a “relatively experienced diver”, was in the water at the Anthea Wreck, approximately 30 nautical miles north-east of Bundaberg, when he became separated from his crew and began to drift about midday.

He was eventually rescued about 6:00pm, just after sunset.

“It’s a long time to spend by yourself,” he said.

Mr Childs said he could see and hear helicopters around him but they were unable to spot him.

“Then apparently there were a lot of boats out there but I didn’t see any of those … all I had seen and heard was a trawler which I tried swimming towards,” he said.

About 5:30pm, a plane spotted Mr Childs and Water Police were able to reach him.

“I was nice and warm in my wetsuit … I wasn’t overly tired as I was floating,” he said.

“I just wanted a drink of water and a cup of tea.”

He said the thought of having to spend the night at sea did not worry him.

The experience has not turned him off scuba diving either.

“I’ll be in the water tomorrow probably,” he said.

‘He didn’t panic and did all the right things’

Mr Childs said he drifted away after missing the chance to grab the boat’s tagline.

“We took a while to anchor up … which left us [with] several people in different states of readiness. I was one of the first to hop in [to the water],” he said.

“It was then 15 minutes before the last people hopped in … in which time we were fighting the current the whole way.

“Then we started to descend down the line. One person was up the top, so I went to swap hands and I missed the rope … so I surfaced alongside to the boat.

“There was no tagline out the back for me to grab on to … by the time the skipper had thrown it out I was already passed it.”

The officer in charge of the search operation, Sergeant Rob Jorna, said Mr Childs’ experience with the sea helped aircraft locate him.

“He knew what to do, and his level headedness at the time, and he didn’t panic and he did all the right things, and activated his safety equipment which alerted the air observer,” Sergeant Jorna said.