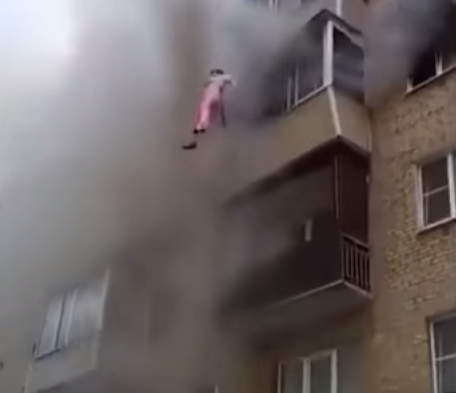 A family in Russia has had a lucky escape after a fire in their home forced them to leap from the fifth floor of their burning building.

Dramatic footage, captured by onlookers, showed the parents dropping their youngest child to the neighbours on the ground, followed by the second child from the balcony of their apartment as smoked billowed from the windows, before jumping themselves.

The mother told Russian news site NewInform: “My husband realised that we were not locked out. Everything in the apartment was in the black smoke, and we strongly choked. And I have a child with heart disease who is 11 months old.

“We got everything on the balcony, and my husband said ‘we will jump, otherwise we cannot escape’.”

Watch the dramatic moment they leapt to safety below:

Family forced to leap for their lives from fire