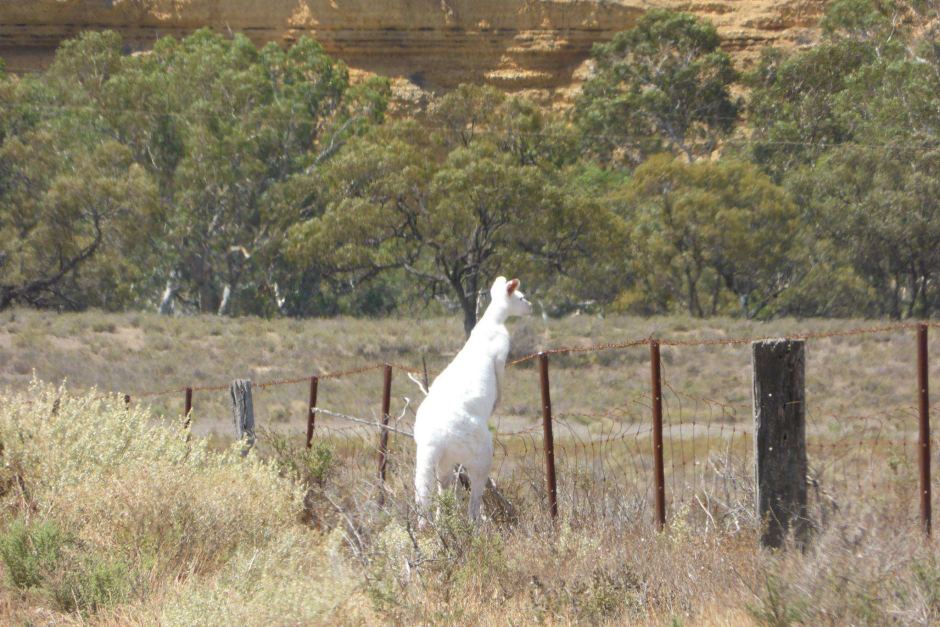 A rare albino kangaroo has become a social media star after being spotted at the Big Bend on the River Murray in South Australia.

Albino animals usually have a shorter life-span as their easy-to-spot appearance makes them vulnerable.

Their white skin also makes them susceptible to sun damage and skin cancer, and they have a genetic predisposition towards sight and hearing issues – making it harder for them to fight off prey.

• Spider vs snake: the David and Goliath battle
• Rescued dugong relocated to waters off Brisbane

The photo of the unusual kangaroo was taken south of Swan Reach by Rosemary Faehrmann, who posted the image on her houseboat firm’s Facebook page.

“I jumped out of the car with the camera and the roo stopped at the same time and looked back at us to see if we were chasing it I think,” Ms Faehrmann said.

“It just stood their looking for a minute and I fired off a couple of quick shots on the camera and then it took off further down the fence line.”

The image has been shared on Facebook more than 7000 times and has had more than 8000 likes since it was posted earlier this month.

“It went crazy, we’ve had a reach of over a million people on our page, and the South Australian Tourism Commission has shared on their pages here in South Australia and also in the UK, Germany and India,” she said.

Ms Faehrmann said while she sees kangaroos on a daily basis, she had never seen a white one before.

“There’s quite a few around in wildlife parks, Bordertown, Cudlee Creek, places like that have them in captivity where they can be protected, but in the wild they have a bit of a harder time surviving,” she said.

“So seeing them in the wild is more unusual definitely.

“I was quite excited about it and I thought surely other people will be excited as well and they have been.”