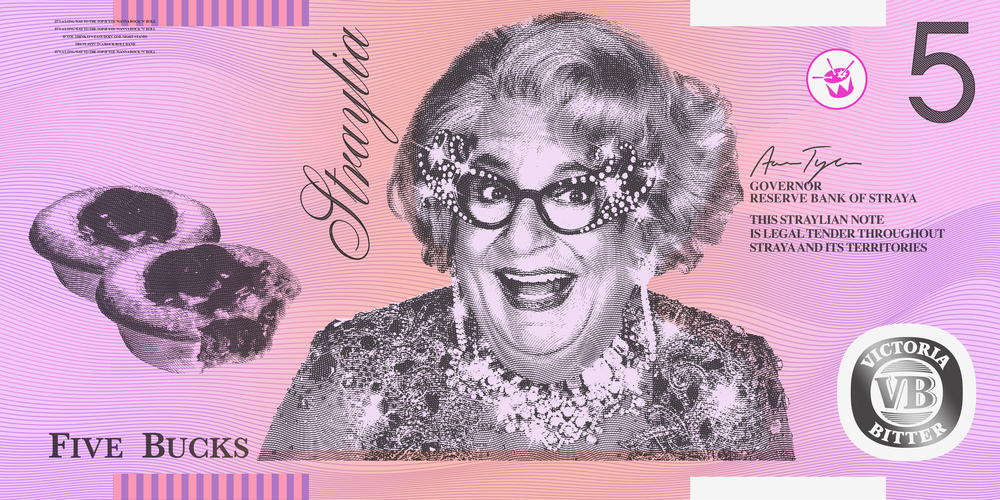 In Australia, or ‘Straya, we know the rest of the world sometimes thinks of us as small-minded, kangaroo-riding bush-dwellers, overrun by reptiles and huge spiders.

As much as we hate to admit it, sometimes, they might actually be right.

Whether it’s being chased off a golf course by a crazed kangaroo, or suggesting we change our bank notes to feature Alf from Home and Away, sometimes we just can’t miss an opportunity to perpetuate the Aussie stereotype.

When a young boy chomping on watermelon skin became an overnight sensation:

How do you get the attention of the camera at Melbourne’s Big Bash derby? You gobble an entire watermelon, skin and all, while sitting in the stands.

Watermelon Boy (as he became known) was a top story on news outlets around the country – that’s ‘Straya for you.

No one could believe their eyes when they saw a fin heading directly for surfer Mick Fanning during the J-Bay Open in South Africa last year. Even more surprising was Fanning’s defence mechanism: “I punched it in the back.”

When this snake decided it could take on a possum:

Australians love an underdog, and this snake tackling a much larger possum may be the very definition of giving it a red hot go.

When a shirtless bloke with a busted thong foiled an alleged robbery after a few beers:

On the way home enjoying a few cold frothies with their mates, James Ross-Munro and Kane Wiblen stumbled across what appeared to be an attempted robbery. Mr Ross-Munro decided to confront the pair in a hilarious, yet frightening sequence of events.

Mr Wiblen posted the video on Facebook later that morning, saying: “Nothing says an awesome Friday like beers, mates, laughs, oh and this burger shop robbery gone to s–t. Interesting night to say the least!”

When Nick Kyrgios’ brother used Aussie fashion to hit back at Dawn Fraser:

Tennis young gun Nick Kyrgios got himself into trouble last year when he laid a revolting sledge on Stan Wawrinka during a match. Swimming legend Dawn Fraser’s response? “Go back to where you came from.”

Nick’s brother Christos wasn’t going to accept that, so he went on The Project wearing the most ‘Strayan outfit he could muster.

When a kangaroo showed a couple of golfers who’s boss:

This video of some golfing mates being chased off the course by a kangaroo wouldn’t be the same without the blood curdling screams of “Run, Connor, Run!” A warning to golfers everywhere: you may have the cart, but don’t forget who’s king of the course. (Warning: contains coarse language)

When Coach Bombay changed the words of Outkast’s Hey Ya and created our new national anthem:

Featuring the words “We believe that mateship is forever” and “What’s cooler than a big cold beer?”, the video got rave reviews from YouTube viewers, thanks to the unbeatable mash-up of imagery, including Kylie Minogue, indigenous dancers and an overweight man in a yellow singlet.

When a Melbourne graphic designer almost convinced us to change our bank notes:

We may be ahead of the pack with our plastic bank notes, but most Australians have no idea who’s staring back at us when we pull out a twenty to pay for a parma.

Melbourne designer Aaron Tyler’s side project went viral when we realised just how good Kath and Kim, Pharlap, Agro and others would look on our notes. When a bunch of people decided that Shannon Noll was about as ‘Strayan as it gets:

Shannon Noll’s career may have petered off about 13 years ago after his Australian Idol days, but recently he’s been the subject of Internet parody and affection.

A Change.org petition to bring ‘Nollsy “back into the limelight” and play at Groovin the Moo festival in Victoria has gained 6000 votes and counting. Meanwhile the memes just keep rolling in. When Lee-Lin Chin was named ‘Lambassador’, and used chops to lure ex-pats home:

It’s the lamb advertisement that may have caused more controversy than it’s sold chops, but no one could deny Lee Lin Chin is amazing as an evil genius tasked with bringing Australians home this Australia Day. And finally, these words of advice from a frank Twitter user:

While most will spend Australia Day catching up with friends and family, this matter-of-fact advice has gone viral ahead of the weekend’s festivities. The most Aussie things to happen in the past year