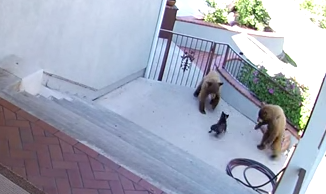 A pet French bulldog has come off the unlikely winner when two bears galloped onto a property in Monrovia, California.

Incredible security footage shows the brave 20-pound bulldog run up to the 100-pound bears and scare the daylights out of them.

Little Jewel doesn’t stop there, chasing the bears until one of them is forced to quickly clamber over a fence and flee the property.

“[It] blew me away. I couldn’t believe it … she turned into a wolverine,” he told WSBT-TV news.

Mr Hernandez has set up the security camera after bears started damaging his property.

Bear sightings are common in Monrovia, while coyotes and mountain lions also roam the area.