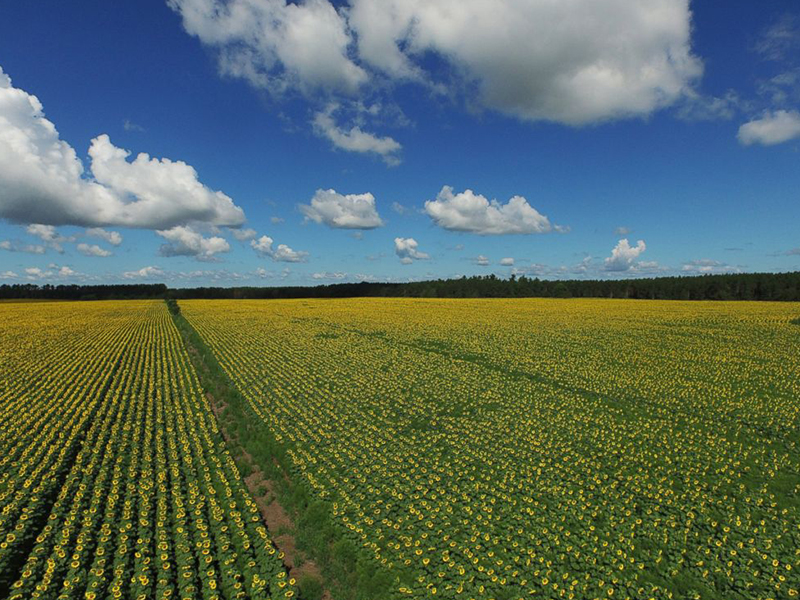 While perhaps not as everlasting as marble, a grieving husband from Eau Claire in Wisconsin has lined a highway with thousands of sunflowers for his late wife.

Don Jaquish spent a week planting 400 acres of sunflower seeds along a seven-kilometre stretch of a Wisconsin highway after he lost his wife, Babbette, in November 2014.

More than 70 days after he planted the seeds in June, the flowers began to bloom.

“She got to be known as the sunflower lady of the community,” Jaquish told ABC News.

“So after she passed away, I thought it would be a tribute to her to plant 4.5 miles of sunflowers on each side of Highway 85.”

Neighbours rented Jaquish any land that he didn’t already own so that his spectacular gesture of love could be seen from both sides of the highway in Eau Claire.

“Everyone that ever met Babbette fell in love with her,” Jaquish said.

“I was just lucky enough to be the guy that she fell in love with.”

Babbette and Jaquish were married in 2000 and it was the second marriage for both of them.

Babbette was diagnosed with multiple myeloma in 2006 and underwent 22 different cancer treatments, including many clinical trials.

“She realised the importance of research in clinical trials. She went from being expected live two weeks to two months to nine years,” said Jaquish.

A few years after her diagnosis, Jaquish and Babbette decided they wanted to grow sunflowers and sell the seeds to raise money for cancer research.

While she was too unwell to start the business, Jaquish and one of Babbette’s daughters, Jenny White, started the company ‘Babbette’s Seeds of Hope’ soon after she passed away.

“We wanted it to be a statement of love. There’s 4.5 miles of sunflowers, and it’s an enormous, beautiful sight. And that’s just like my mom. That’s what she did with her life,” said White. Disease concern for survivors of Afghanistan earthquake
Steve Smith confirmed as starter for first Test against Sri Lanka
Deadly Norway shooting treated as Islamist terrorism: Police
Matildas will be keen to forget 7-0 drubbing by Spain
Upcoming stats will reveal where and how hard rates are hitting economy
Victorian MPs pocket a tidy 2.75 per cent pay raise
Our heroes honoured for courage
Today's Stories

Man grows 400 acres of sunflowers for his wife