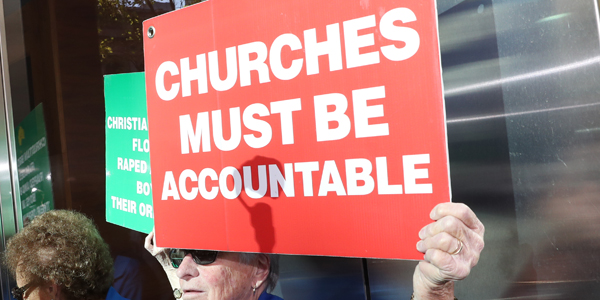 The George Pell case has prompted protests outside court whenever the case has been heard. Photo: AAP

• Cardinal George Pell was released from prison on March 7, 2020 after the High Court quashed his five convictions for child sexual abuse.

Whichever way the High Court falls on George Pell’s criminal conviction for sexual abuse, the debate that rolls around the disgraced Catholic cardinal will continue.

The 78-year-old has steadfastly maintained his innocence since being convicted in 2018 and subsequently jailed for six years for raping a 13-year-old choirboy and sexually molesting another at Melbourne’s St Patrick’s Cathedral in 1996.

But throughout that trial and the appeal process, crowds of sexual abuse victims and supporters of Pell have turned up outside the hearings to make their feelings known.

It’s unlikely to be different outside the High Court on Tuesday, with the judgment sure to ignite further discussion around the Catholic Church’s response to child abuse within its ranks, and Pell’s role in the Australian church.

Just last week the ABC detailed further allegations in its Revelation program, prompting more anger and concern about how child abuse survivors have been treated by the church.

Pell is the most senior Catholic in the world to be convicted of child sex abuse, but until his appeals are exhausted he still remains a member of the College of Cardinals.

Last August Victoria’s Court of Appeal – in a 2-1 majority decision – found there was enough evidence for the jury to find Pell guilty beyond reasonable doubt.

Now it’s the High Court turn to deliver its verdict, with numerous possibilities open to the seven justices, with a 4-3 majority needed.

The appeal bid is based on two grounds – firstly that Chief Justice Anne Ferguson and President Chris Maxwell made an error in requiring Pell to prove the offending was “impossible” in order to raise reasonable doubt.

Secondly, his lawyers have argued the judges erred in concluding the guilty verdicts were not unreasonable, because of findings there was reasonable doubt as to his guilt.

The possible results include the following:

The High Court has to grant Pell special leave to appeal before they can formally consider the appeal.

Usually this happens before the appeal hearing, but in Pell’s case it was decided it would hear the appeal arguments before making a decision on granting special leave.

If special leave is refused, Pell’s conviction will stand and he will remain behind bars.

If the High Court determines there is a legal question for it to consider, then it will grant special leave.

After that, there’s a few paths it can follow.

After considering the two days of arguments and written submissions, the High Court justices could determine there was no error in the Court of Appeal’s majority decision to uphold Pell’s conviction.

Alternatively, they might find there was an error but not one that affected the ultimate decision.

If either are the case, the appeal will be refused and Pell’s convictions will be upheld.

He will remain in prison.

Appeal both refused and granted

Because Pell was convicted of charges relating to two separate incidents, it’s possible the High Court could grant the appeal in relation to one incident but refuse it in relation to the other.

That could see Pell’s conviction quashed on some charges but not others, meaning he would have to be re-sentenced.

Another potential outcome is that the High Court determines there was an error in the Court of Appeal’s decision, but it was not one that immediately requires Pell’s conviction to be overturned.

It could be ordered that the original appeal be reconsidered, either by the High Court or the Court of Appeal.

If the High Court determines there was an error in the Court of Appeal’s majority decision, it might find that the error was so significant that Pell’s convictions should be quashed and he be acquitted.

This would result in his immediate release from prison.

This is what his defence wants, with Pell’s barrister arguing for this last option.

“We’re not here to prove anything … except to show, to demonstrate, that there was unexplored possibilities that meant it was not open to the jury to convict,” Mr Walker told the High Court last month.

The trial focused on five or six minutes after Sunday Mass in December 1996, when Pell caught the boys sneaking wine from the priest’s sacristy.

The jury found he molested the two boys then and, some time later, pushed the first boy against a corridor and molested him again.

At both trials … the evidence of the complainant was the only evidence to the effect that the offending had occurred.’’

Mr Walker said the complainant’s evidence couldn’t stand if that of sacristan Max Potter and Monsignor Charles Portelli – which included that Pell was never alone after Mass – was accepted.

Ms Judd said the appeal should not be granted, or, if there was a mistake made by the Court of Appeal, that appeal should be heard again.

She urged the judges to consider the evidence as a whole, pointing to evidence that practices weren’t always followed.

“Quite a number of choirboys and others do say there were occasions when … he did not stand on the steps but he actually (joined the procession). The choirboys recall having to wait for him to go through,” Ms Judd said.