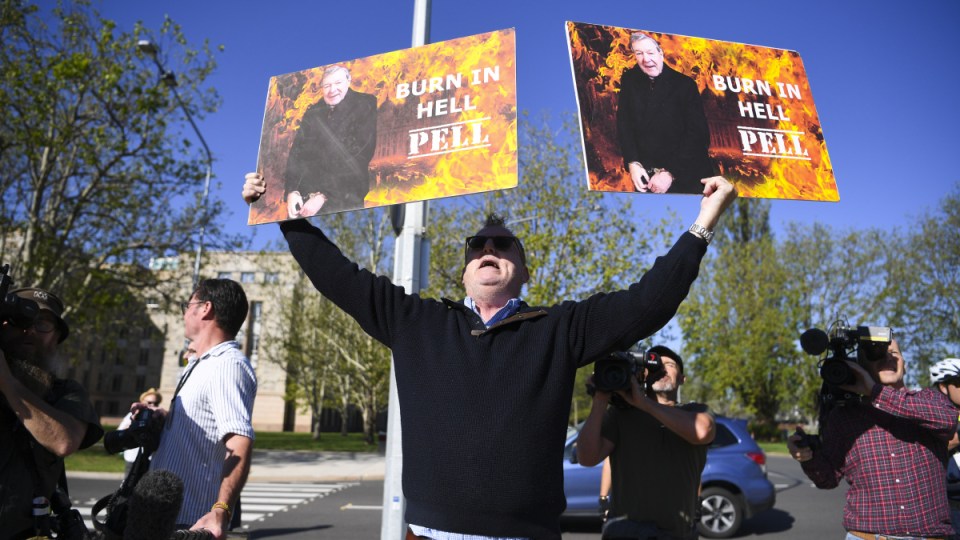 Supporters of George Pell have clashed outside the High Court with a man calling for the disgraced Catholic cardinal to “burn in hell”.

The full bench of the High Court began hearing Pell’s legal team’s final bid for his freedom in Canberra on Wednesday.

On Wednesday morning, Michael Advocate from Victim Justice stood outside the court holding signs depicting Pell in front of fiery scenes and the words “Burn in hell Pell”.

A group of Pell supporters tried to block Mr Advocate from speaking to reporters, yelling for the jailed cardinal to be forgiven.

The group of about 50 supporters, many holding Australian flags, sang hymns outside of the court as lawyers prepared for the case inside.

Bhikku Buddha Dhatu said he had lived through the Vietnam War, showing his burn scars and saying he had forgiven those responsible.

Mr Advocate, who supports close to 200 victims of abuse, said more help was needed for compensation and justice.

“George Pell is a terrible man,” he said.

“A lot of us here are Catholics but we’re just outraged and we’ve got to get rid of this idiot.

“If he does get released I’d say ‘George, respectfully, get on a plane, go back to Italy and we hope to never see you again’.”

Pell, 78, was jailed for six years last year for sexually abusing two choirboys at Melbourne’s St Patrick’s Cathedral, shortly after being appointed Archbishop of Melbourne in 1996.

The High Court hearing is expected to run into Thursday.

The court has not formally granted Pell’s application for appeal, instead referring it “for argument”.

That means after the hearing, the court can refuse the application for special leave, or approve it. It can then either allow or dismiss the appeal.

Pell, who has steadfastly maintained his innocence, is not in Canberra for the hearing. He remains in Victoria’s Barwon Prison, and will be relying on his legal team for news of the outcome.