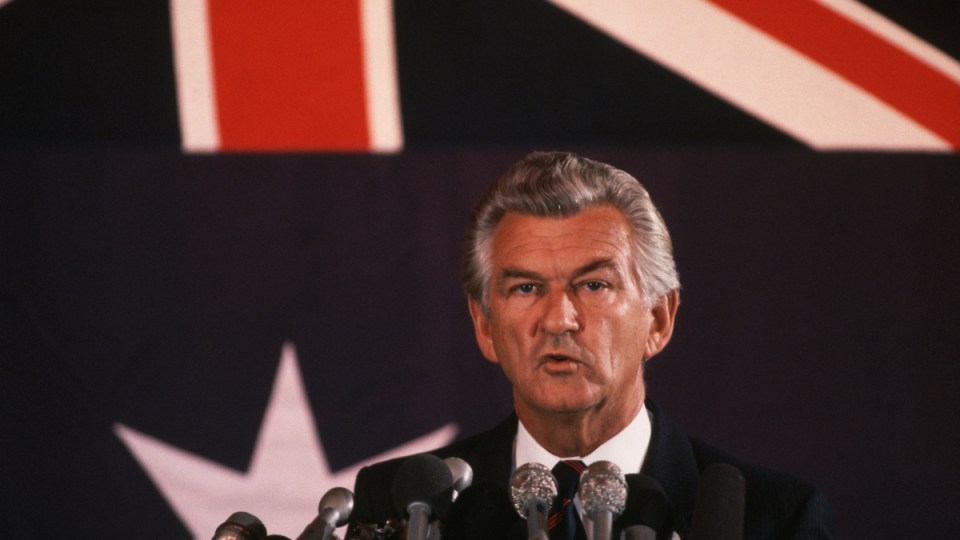 Former PM Bob Hawke has passed away at the age of 89. Photo: AAP
breaking

Former prime minister Bob Hawke, one of the country’s most popular leaders and a man credited with transforming the nation’s economy, has died aged 89.

“Today we lost Bob Hawke, a great Australian – many would say the greatest Australian of the post-war era,” his wife Blanche d’Alpuget said in a statement on Thursday evening.

He died peacefully at home, she confirmed.

A private funeral will be held for his family, and a public service will be held in Sydney in the coming days.

Mr Hawke, who was conspicuously absent from Labor’s campaign launch earlier this month, was Australia’s 23rd prime minister, a position he held from 1983 to 1991.

During his time as PM he presided over the introduction of compulsory superannuation, Medicare, and along with his treasurer Paul Keating, floated the Australian dollar.

“Australian people loved Bob Hawke because they knew Bob loved them. This was true to the very end,” he said.

Australians everywhere remember and honour a man who gave so much to the country and people he cared for so deeply.

May he rest in peace. pic.twitter.com/NzKwxW1e4X

“With his passing, the labour movement salutes our greatest son, the Labor Party gives thanks for the life of our longest-serving prime minister and Australians everywhere remember and honour a man who gave so much to the country and people he cared for so deeply.

The last photo of Bob Hawke, taken on Monday with @billshortenmp pic.twitter.com/mex2hJ4DQQ

“In Australian history, in Australian politics, there will always be B.H. and A.H: Before Hawke and After Hawke. After Hawke, we were a different country. A kinder, better, bigger and bolder country.

“His brilliant, incomparable partnership with Paul Keating transformed our economy. His deep friendship and co-operation with Bill Kelty gave us the national Accord and the social wage.”

“He has no fear of death and we’ve talked about it quite a lot.” An emotional Blanche d'Alpuget tells (an emotional) @leighsales how she'll cope with life after Bob Hawke. More tonight #abc730 pic.twitter.com/W8ktcaJ8Zp

In a statement, Ms d’Alpuget said: “Bob Hawke and Paul Keating and their governments modernised the Australian economy, paving the way for an unprecedented period of recession-free economic growth and job creation.

“Bob’s consensus-style approach of bringing together the trade union movement and the business community boosted job opportunities while increasing the social wage through Medicare and extra financial support for low-income families.

“Together with his highly talented Cabinets, he foresaw the Asian Century and positioned Australia to take full advantage of it through a program of sweeping economic reforms.

“Among his proudest achievements were large increases in the proportion of children finishing high school, his role in ending apartheid in South Africa, and his successful international campaign to protect Antarctica from mining.

“He abhorred racism and bigotry. His father, the Reverend Clem Hawke, told Bob that if you believed in the Fatherhood of God then you must also believe in the Brotherhood of Man. Bob would add today the Sisterhood of Women.

“Bob was dearly loved by his family, and so many friends and colleagues. We will miss him.

“The golden bowl is broken.”

A larrikin with a sense of destiny

Labor’s most successful federal leader was a larrikin with a narcissistic streak and little overarching ideology.

He was a man of shifting factional allegiances who could still give and command great personal loyalty; a pragmatist with a sense of destiny; passionate yet calculating.

One of the charismatic leader’s most famous quips came after Australia II triumphed in the 1983 America’s Cup.

“Any boss who sacks anyone for not turning up today is a bum”, Mr Hawke exclaimed.

His success in four elections and through nearly nine years in The Lodge depended largely on two strengths rarely seen in combination – a peerless ability to win the affection of the people and great managerial and negotiating skills.

Mr Hawke had two careers with the first, in the ACTU, providing the platform for the second in parliamentary politics. He was unique in having led Labor’s industrial, organisational and political wings.

Yet despite his unmatched electoral record, he was dumped undefeated by a party that usually allowed its leaders a couple of losses.

After leaving parliament, he and first wife Hazel Hawke – who had been a major political asset – divorced.

He married Ms d’Alpuget and, soon after, Hazel began her long battle with Alzheimer’s disease that ended with her death in 2013.

He wrote his memoirs and co-authored a major report on the ALP.

His political instincts were still acute – he lobbied unsuccessfully against Mark Latham during the 2003 Labor leadership battle and campaigned vigorously in the 2007 election that finally brought Labor back to power.

And his place in the Labor pantheon was formally acknowledged in 2009, when he became only the third person to be awarded national life membership of the party.

Tributes to the beloved former prime minister flooded in as the news broke.

“Without question, Bob was the greatest peacetime leader Australia has ever had,” Ms Gillard said.

“As a teenager Bob inspired me. As a PM he guided me.

“I will miss him. I wish so very much that Bob had been able to see one more election day.”

“Together with Therese and the entire nation, I mourn his passing,” he said.

Mr Abbott – a man Mr Hawke once described as “mad as a cut snake” – praised the former PM as “Labor’s greatest prime minister”.

“All Australians should mourn someone who changed our country for the better,” he said.

Prime Minister Scott Morrison described Mr Hawke as a “great Australian who led and served our country with passion, courage, and an intellectual horsepower that made our country stronger”.

“He was true to his beliefs in the Labor tradition and defined the politics of his generation and beyond.”