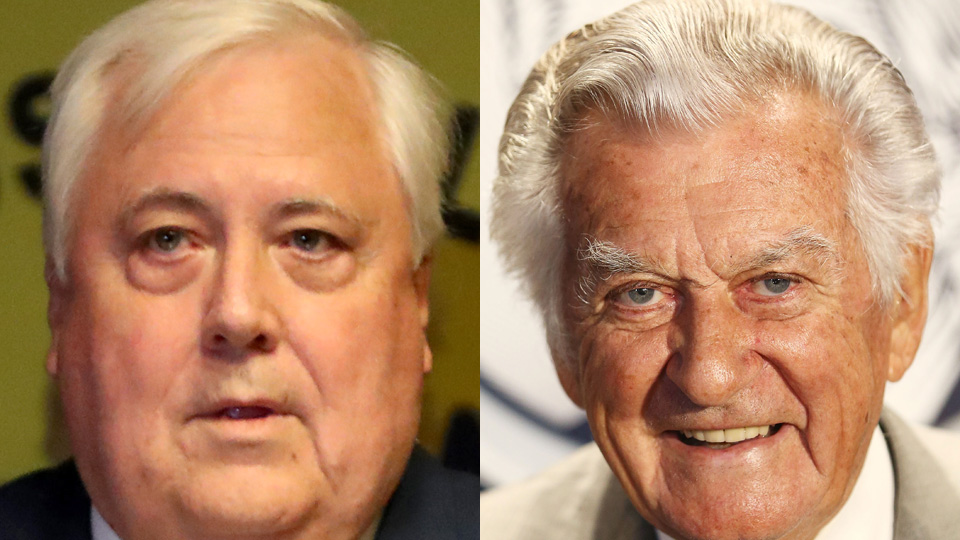 Labor leader Bill Shorten has opened fire on Clive Palmer, warning Australia the billionaire businessman is a political “conman” whose preference deal with the Prime Minister will come at a price.

As the election race enters its final days, Mr Shorten has also brought in Labor legend Bob Hawke to back the Opposition Leader as Australia’s next prime minister.

He is also rolling out a new plan to tackle wage theft.

Under Labor’s proposal, released on Wednesday, individual claims for back pay of up to $100,000 will be dealt with by a new one-stop shop to resolve wage theft issues, and groups of workers will be able to bring claims against a single employer.

Honoured and humbled to have the support of one of Australia's greatest Prime Ministers, Bob Hawke.https://t.co/lXXqHFSIbk

But, as voters prepare to head to the polls on Saturday, Mr Shorten has highlighted Mr Palmer’s record in long failing to pay the entitlements of sacked workers – despite a $50 million advertising campaign to back his quest for a Senate seat. In recent days, some workers have received the money they were owed after the closure of Mr Palmer’s Townsville business, Queensland Nickel.

Despite Mr Morrison ruling out any tax deal with Mr Palmer’s United Australia Party, Mr Shorten said Mr Palmer “doesn’t do a deal if there’s nothing in it for him”.

“He’s also laughing at all the businesses who do the right thing by their employees.”

According to the ALP, voters in a weekend focus group in the NSW seat of Reid used words such as “conman”, “untrustworthy” and “crackers” to describe the eccentric billionaire.

On Wednesday, Mr Shorten warned voters that Mr Palmer never did anything for free.

“Especially when, thanks to the preference deal he’s done with Scott Morrison, Clive Palmer can turn up on day one with a political IOU almost as big as his ego,” he said.

Mr Morrison has categorically ruled out a deal with Mr Palmer to deliver the final tranche of his original company tax cuts, which were trimmed by the Senate.

“I can absolutely rule that out,” he said last week.

“Absolutely 100 per cent rule out that we will not be increasing or reducing taxes for businesses for more than $50 million in the next term of Parliament.”

In the letter, Mr Hawke tackles criticism that Mr Shorten will be too close to the union movement.

“While Bill’s political opponents argue his trade union background is a liability for a future prime minister, I consider it an asset, as it was for me,” he wrote.

“It gives him the experience to achieve consensus with business, unions and community-based organisations for the challengers that lie ahead.”

“We have seen too many examples of systemic wage theft. But lengthy and costly court proceedings often prevent and deter workers from recovering wage underpayments,” he said.

To fast track workers’ claims, Labor – if elected on Saturday – will create a new low-cost small claims jurisdiction to sit alongside the Fair Work Commission.

Labor claims the new jurisdiction will be designed so that most claims can be resolved in a single day. It will also be able to mediate claims and enforce orders for repaying wages.