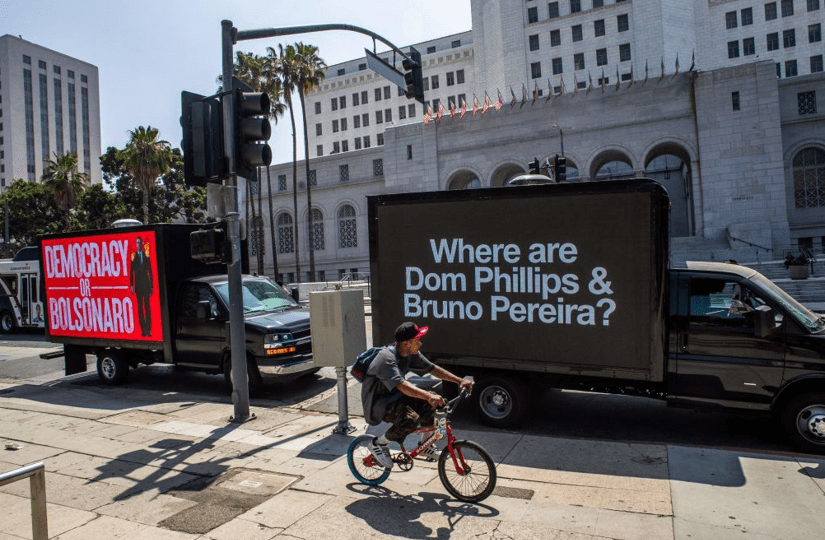 The disappearance and feared murders of the crusading journalist and his Indigenous associate is prompting protests around the world, including these Los Angeles signs. Photo: Getty

The mystery surrounding the disappearance of a British journalist and his indigenous companion in the Amazon basin has deepened, with Brazilian police saying they may have fallen victim to an international network that pays poor fishermen to fish illegally.

Freelance journalist Dom Phillips and Bruno Pereira were last seen a week ago near the Javari Valley Indigenous Territory, which sits in an area the size of Portugal bordering Peru and Colombia.

The two men are known to have been in the Sao Rafael community before departing to return by boat to the nearby city of Atalaia do Norte. They never arrived.

After a slow start, the army, navy, civil defence, state police and Indigenous volunteers have been mobilised in the search.

On Saturday, federal police said they were still analysing what was described as “human matter” found the day before in the area where the pair disappeared. No more details were provided.

The illegal fishing scheme is run by local businessmen, who pay fishermen to poach in the Javari Valley watershed.

One of the most valuable targets is the world’s largest freshwater fish with scales, the arapaima, which can weigh as much as 200kg and can reach three metres in length.

The fish is regarded as good eating and sold in nearby cities, including Leticia, Colombia, Tabatinga, Brazil, and Iquitos, Peru.

The only known suspect is fisherman Amarildo da Costa de Oliveira, also known as Pelado, who is under arrest. According to accounts by Indigenous people who were with Pereira and Phillips, he brandished a rifle at them the day before the pair disappeared.

Pelado denies any wrongdoing and said military police tortured him to try to get a confession, his family told the Associated Press..

Pereira, who previously led the local bureau of the government’s Indigenous agency has taken part in several operations against illegal fishing.

In such operations, as a rule the fishing gear is seized or destroyed, while the fishermen are fined and briefly detained. Only the Indigenous people of the region can legally fish in their assigned territories.