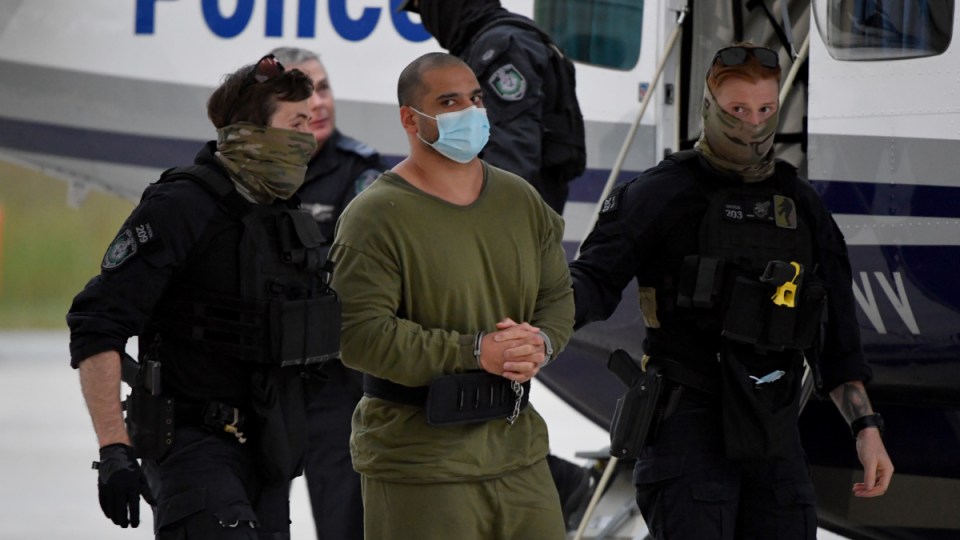 Accused drug-kingpin Mostafa Baluch has been slapped with one more charge. Photo: AAP

Accused drug lord Mostafa Baluch made no attempt for bail in a Sydney court after allegedly cutting off his ankle monitor and attempting to cross into Queensland.

The fugitive was shackled and flown back to Sydney from the Gold Coast on Thursday night under police guard before his matter was called on Friday morning.

Baluch’s desperate bid for freedom ended when he was found hiding in a grey Mercedes concealed in a shipping container being transported on the back of a truck.

He had been on the run from police when nabbed during a botched bid to cross the Queensland border on Wednesday morning.

Defence lawyer Moustafa Kheir said his client need not appear via video link in Sydney’s Central Local Court and confirmed he would not apply for bail.

Magistrate Margaret Quinn confirmed his bail had been officially revoked.

Baluch is charged with a string of drug offences related to a 900-kilogram shipment of cocaine into Australia that had a street value of $270 million.

He also faces additional charges over his breach of bail, and will next appear before court on December 1.

More than two weeks earlier, police say Baluch cut off an ankle monitor while on bail and sparked “one of the largest fugitive hunts in the country”.

Police allege he was planning to flee overseas from Queensland.

Queensland officers searched dozens of trucks before zeroing in on the container after noticing it wasn’t properly secured.

After a night in the Southport Watchhouse, Baluch’s extradition application was consented to without objection.

He was taken to Coolangatta Airport and flown by PolAir6 – a Cessna Grand Caravan – to Bankstown Airport.

Before his arrest in Queensland, the accused kingpin was last seen in Bayview on Sydney’s northern beaches on October 25, days after being granted bail.

He was released on strict conditions, including $4 million surety on his waterfront home at Bayview.

The man who was driving the truck in which Baluch was found – who police say owns a transport company – was also arrested.

The 46-year-old has been charged with doing an act intended to pervert the course of justice and denied bail.