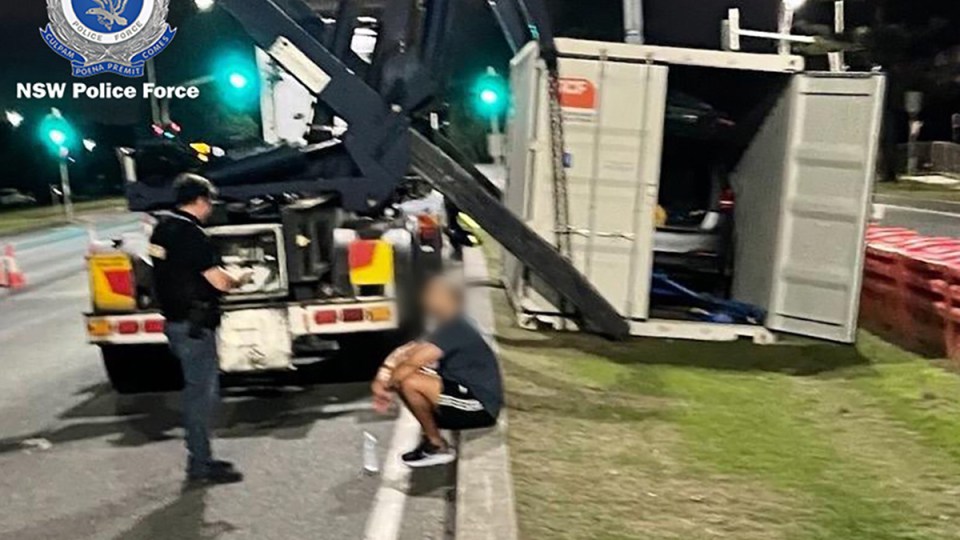 Police have captured Mostafa Baluch who has been the subject of a manhunt after breaching bail. Photo: AAP

Accused Sydney drug lord Mostafa Baluch evaded police for more than two weeks before a simple knock on the side of a truck by an alert constable proved his undoing.

Baluch was found hiding in a grey Mercedes concealed inside a container, on a truck trying to cross the NSW border into Queensland early on Wednesday morning.

Sixteen days earlier he had cut off an ankle monitor while on bail.

That sparked “one of the largest fugitive hunts in the country”, Assistant Commissioner Stuart Smith said, which came at an “extraordinary” cost to police.

Detectives knew Baluch was trying to make his way to Queensland in a truck, then planing to flee overseas, Organised Crime Squad Commander Rob Critchlow said.

“We were close behind him all the way,” he said.

But it was the diligent work of Queensland officers that nabbed the 33-year-old.

They had searched dozens of trucks over the past few days, but one caught the eye of an officer because it wasn’t properly secured.

“We suspect that the person … thought it was a drop off point – that he was being signalled that it is safe. Of course, he didn’t realise it was a constable.”

A surprised Baluch was arrested and taken to Southport Watch House. NSW organised crime squad detectives will seek his extradition later on Wednesday.

“I was embarrassed for the Australian Federal Police because they had to go and tell our international partners that we had lost one of the big ones,” Mr Elliott said.

“I’m tracking down the constable that did the famous knock on the side of the truck. He’ll get a beer and a hug from me when the borders open.”

Baluch was last seen in Bayview on Sydney’s northern beaches on October 25, just days after he was granted bail.

He was released from custody under strict conditions, including $4 million surety on his waterfront home at Bayview.

“I’d have nightmares if I even started to think about (the cost).”

Baluch had been charged with a string of drug offences related to a 900kg shipment of cocaine into Australia that had a street value of $270 million, but will also face charges over his breach of bail.

The man who was driving the truck in which Baluch was found – who police say owns a transport company – was also arrested and will be charged with harbouring a wanted person.

“(Police) are now going through that trucking company with a fine tooth comb and we understand that there’ll be very few trucks left in the road tomorrow when they’re finished,” Det Supt Critchlow said.

More of Baluch’s associates will be arrested in the coming days and weeks.