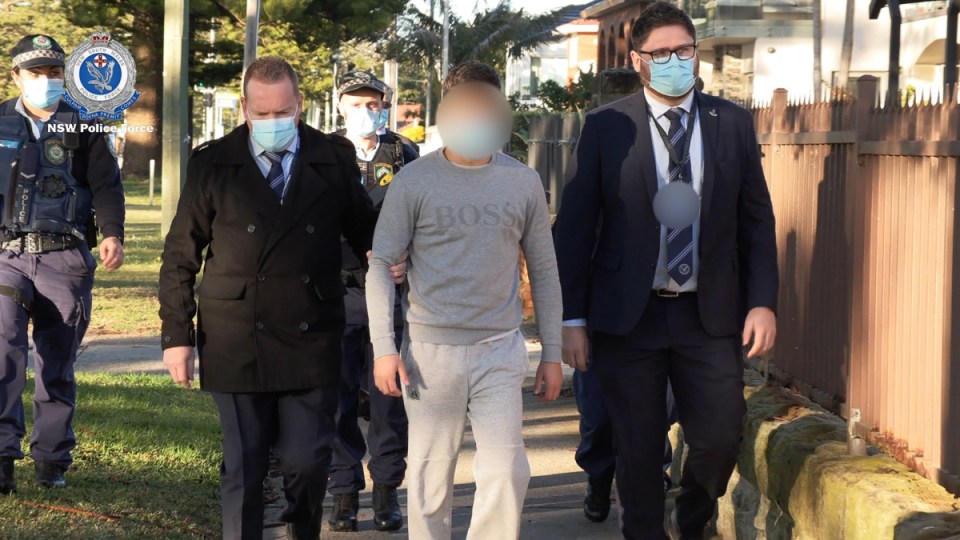 Five men, including a Comanchero outlaw motorcycle gang member, have been arrested in a police operation targeting organised crime syndicates across Sydney.

One of the men arrested is a 21-year-old who was then charged over the shooting of Sydney businessman Mohammed Saab.

Mr Saab, 37, survived the near-fatal attack outside his home in August 2020 when he was rushed to hospital in a serious condition with several gunshot wounds.

In May 2021, police arrested a 46-year-old man at Yagoona who was charged over his alleged role in the incident and remains before the courts.

Following further investigations, detectives arrested the 21-year-old man at a home at Prestons on Tuesday morning.

He was taken to Liverpool Police Station and charged with 13 offences including shooting with intent to murder, firing a firearm in a public place, possessing an unauthorised pistol and larceny.

Police will allege in Liverpool Local Court on Tuesday he shot Saab outside his Turrella home in 2020.

Police then searched a business in Punchbowl and seized 235 extendable batons.

Detective Acting Superintendent Grant Taylor said the arrest was a reminder to anyone who commited violent crime that police would catch up with them “sooner or later”.

“We will focus on not only your criminal acts but your assets, your tax and anything else you are up to that is untoward,” Mr Taylor said on Tuesday afternoon.

Mr Taylor said the motivation behind this shooting is still not clear.

Three men, including a Comanchero outlaw motorcycle gang member, were also arrested at homes at Shellharbour, Elizabeth Hills and Bonnyrigg Heights as part of ongoing investigations into drug supply and break and enter offences.

They were taken to local police stations and were expected to be charged with alleged drug-supply and break and enter offences.

A 23-year-old was arrested at a home in Kogarah as part of ongoing investigations into the alleged importation and supply of drugs across Sydney.

He was charged with 12 offences including suppling a large commercial quantity of a prohibited drug. He was refused bail to appear at Sutherland Local Court on Tuesday.