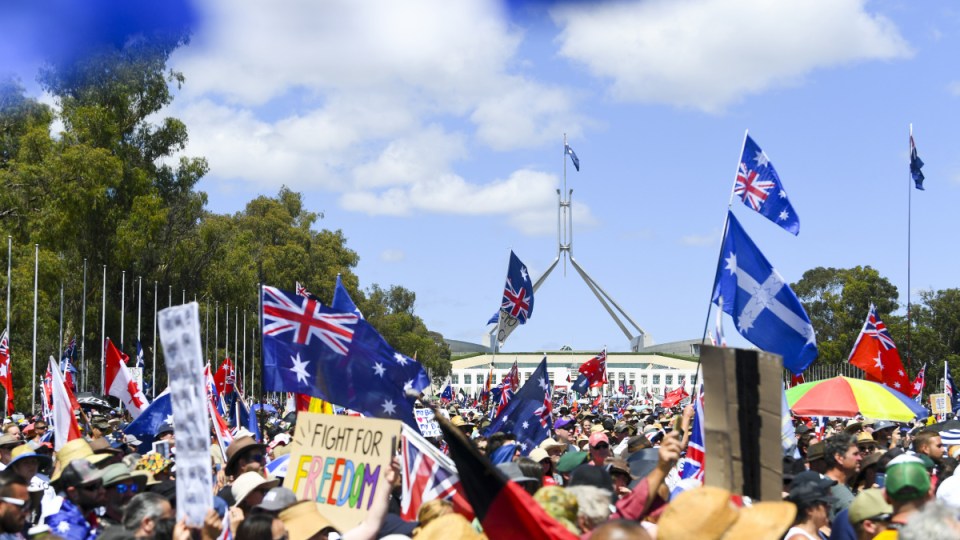 The federal government will lift some COVID-19 restrictions on aged care facilities, but anti-vaccine sentiment remains rife with a mass rally in Canberra.

It came on a day that New South Wales reported a spike in COVID deaths with 32 fatalities, along with 8183 new virus cases.

Victoria reported 19 deaths and 7224 infections on Saturday, while Queensland had 3660 new cases and 13 deaths, South Australia recorded 1372 infections and one death and the Australian Capital Territory had 428 cases and no fatalities.

Despite continuing COVID concerns, the federal government said every aged care resident can have access to one essential visitor at all times, including during any COVID-19 outbreaks or exposures.

“We need to shift the balance from restricting visitors during an outbreak to providing access by at least one visitor per resident per day. This will … provide families with more valuable time with their loved ones,” Aged Care Services Minister Richard Colbeck said.

The expanded visitation instructions will also allow staff to continue working if they have been exposed to the virus but test negative, are asymptomatic and are willing to work.

The government said there were 8972 positive cases of residents and staff in its most recent weekly snapshot of the pandemic’s impact in residential aged care facilities nationally.

The commonwealth, meanwhile, has extended its pandemic emergency measures until April 17, due to the wave of COVID-19 cases of the Omicron variant.

Anti-vaccine mandate protests persisted in the capital, with thousands descending on Parliament House on Saturday, shutting down streets around and putting police on high alert.

The protesters appeared to be a mix of anti-vaccine activists, conspiracy theorists and people from the sovereign citizen movement.

Prime Minister Scott Morrison urged the protesters to demonstrate “in a peaceful and respectful way” noting it was not the federal government’s decision to implement vaccine mandates.

“All other mandates that relate to vaccines have been imposed unilaterally by state governments. They have not been put in place by the commonwealth government… so I understand their concerns about these issues,” he said.

The Canberra rally came as other protesters inspired by the Canadian anti-vaccination mandate ‘freedom convoy’ gathered in France, the United States, the Netherlands and New Zealand.

French police intercepted hundreds of vehicles trying to enter Paris as part of a protest against France’s coronavirus regulations.

Some vehicles managed to arrive at the Arc de Triomphe in central Paris and the heavy police presence fired at demonstrators on the nearby Champs-Élysées.

Songs by the US singer crooner we being played on a 15-minute loop, along with the Spanish dance tune, Macarena.

IN Canada, protesters opposing pandemic restrictions were still occupying a vital Canada-US trade corridor despite an injunction order to end the blockade.