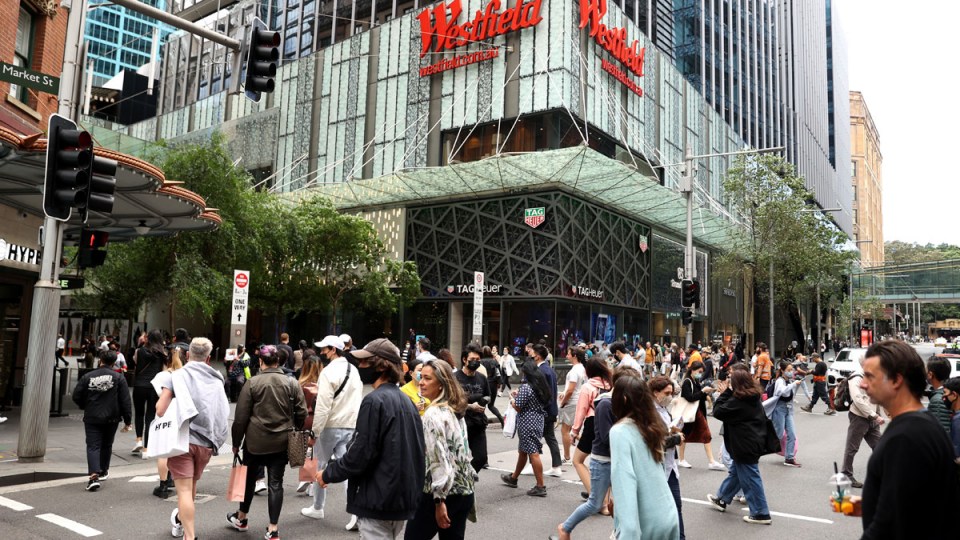 Sydney is set for even more restrictions to ease after reaching a vaccination milestone. Photo: AAP

New South Wales is set for a range of restrictions to be eased and Victoria will learn exactly when it will reopen as Australians continue to race to be vaccinated.

It comes as dozens of people were arrested Saturday when Victorian police quashed another would-be anti-lockdown, anti-vaccine protest in Melbourne.

NSW passed the 80 per cent double-dose vaccination of eligible residents, which will trigger the return of a range of freedoms including community sport and dancing at hospitality venues.

Victoria, meanwhile, is on track to reach its 70 per cent COVID-19 vaccination target this week, with Melburnians told on Sunday the end date of their long-running sixth lockdown has been brought forward by five days.

NSW Premier Dominic Perrottet announced the 80 per cent target had been reached on Saturday afternoon, saying that “summer in NSW is looking good”.

Some 91.9 per cent of residents over 16 have received at least one dose of the vaccine.

The number of 12- to 15-year-olds getting the vaccine is also rising, with 74 per cent of the age group receiving at least one dose, and 31.9 per cent fully vaccinated.

1/2
80% in NSW! Been a long wait but we've done it.
Feels great to break this news. Huge thanks to all the nurses and vaccination hub staff at @NSWHealth, the GPs, the pharmacists, and each and every person who rolled up their sleeve to get us here.

The next stage of reopening will come just one week after lockdown was eased for the fully vaccinated on October 11 including:

All of these freedoms are limited to the fully vaccinated until December.

However, a pub in regional NSW has been closed down by police for allegedly serving unvaccinated customers.

NSW Police Commissioner Mick Fuller told reporters the Caledonian Hotel in Singleton would be closed until Tuesday after allegations of repeated breaches of public health orders.

Police said they have had multiple interactions with the pub’s 57-year-old licensee, who allegedly refused to take steps to prevent unvaccinated people entering.

Under the state’s roadmap, the city’s lockdown – which has run for 73 days – was due to end on October 26, the predicted date when 70 per cent of those aged over 16 are doubled-dosed.

At his Sunday morning press briefing, Mr Andrews confirmed vaccine uptake was exceeding expectations, meaning a number of suspended liberties would be restored as of 11.59pm on Thursday.

She was among seven more reported deaths, taking the state’s toll from the current COVID-19 outbreak to 138.

Organisers flagging other meeting locations via an encrypted social media channel were met by police, who constantly moved across the city ahead of them, quickly dispersing groups.

Tasmania has a nervous wait as further test results from primary contacts of a coronavirus-infected hotel quarantine escapee are returned.

The island’s south, including Hobart, was forced into a three-day lockdown on Friday evening, after a NSW man broke quarantine and  spent about 18 hours in the community.

The 31-year-old, who arrived in Hobart on Monday night without a valid border pass, has refused to co-operate with contact tracers.

He was arrested in the city’s northern suburbs on Tuesday afternoon after fleeing the Hobart Travelodge, and then tested positive.

Authorities have identified 158 primary contacts, with 40 of those returning negative tests as of Saturday morning. All are in quarantine.

The NSW man, who flew into Hobart via Melbourne, has so far been fined $3000 for the breaches.

Mr Gutwein wants police to “throw the book” at him, saying the current penalty doesn’t fit the crime.

ACT on the move

Fully-vaccinated Canberrans can visit an additional 26 locations in southern NSW in a further relaxation of Australian Capital Territory quarantine requirements.

Chief Minister Andrew Barr said residents who could verify they’ve had both vaccinations could travel now to Batemans Bay, Goulburn and the state’s Southern Highlands, Jindabyne, Tumut and Cooma in the Snowy Mountains.

The ACT marked its first full day out of lockdown on Friday, after more than two months of stay at home orders.

With 80 per cent full vaccination likely, further easing of restrictions is set down for October 29.

NSW set for more freedoms, Victoria lockdown set to end thanks to uptake of COVID jabs