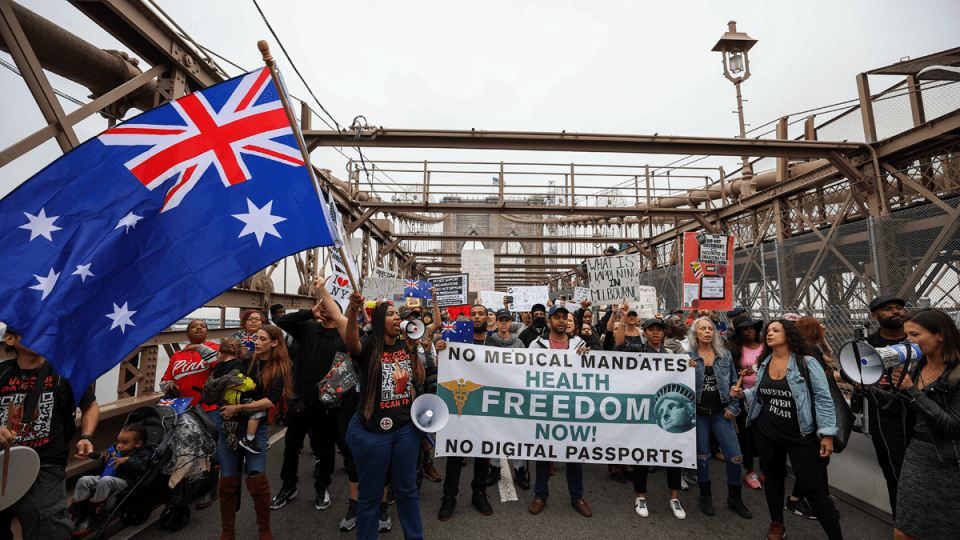 On Tuesday, hundreds of Americans gathered in New York City to supposedly save Australia from tyrannical COVID-19 restrictions.

One protester held a sign reading: ‘What is happening in Melbourne?’

New York City, with a population of 8.5 million people, has recorded more than 34,000 COVID-related deaths.

The Americans chanted “end medical apartheid” and “we support Australia”, as if those same sentiments were commonplace here.

The strange protest’s roots can be traced to a recent fixation among right-wing pundits, anti-lockdown activists and conservative commentators on social media, who see Australia’s COVID-19 restrictions as some kind of warning sign of tyranny and oppression.

In America, where restrictions were largely modest and quickly wound back in many states, Australia’s system of lockdowns and travel restrictions is slammed by some as draconian.

But in New York, an early global hotspot for the virus, the strange protest raged against Australia’s vaccine mandates.

The impetus for this vicarious frustration was a mandate by New York City Mayor Bill de Blasio for teachers in the city to be vaccinated by last Monday.

However, in the background, a months-long smear campaign against COVID restrictions in Australia had been brewing on social media and among right-wing news outlets in the US.

This spread into the mainstream.

Florida governor Ron DeSantis compared Australia to “communist China” in a recent speech. His state, with a smaller population than Australia, has suffered 55,000 COVID deaths and 3.6 million infections.

Much of America’s recent obsession with Australia came after violent protests in Melbourne, and authorities’ responses to them.

Footage of an older woman being pepper-sprayed, a man being body slammed in a train station, and a woman being pinned down by police for not wearing a face mask clocked up hundreds of thousands of views, as clips were snipped from live-streams or copied from one social media platform and reposted on another.

Other American and British personalities on social media – including conservative media commentators, “citizen journalists” and live-streamers – collated their own compilation videos of footage from Australian protests.

The videos showed police marching in riot gear or pulling people out of cars for breaching lockdown rules, with some set to dramatic music, clocking up hundreds of thousands of views.

These posts were often accompanied by the hashtags #SaveAustralia and #AustraliaHasFallen, which trended across Twitter from the end of September, and continue to show up in Twitter’s most trending hashtags as of Wednesday.

Since August, right-wing media outlets in the US have targeted Australia’s lockdowns and other restrictions.

In late September, he claimed “COVID mandates are a far greater threat to Australia’s economy and its social fabric than COVID itself”.

Podcasting giant Joe Rogan – who contracted COVID-19 in September – has slammed the situation in Australia on his program, The Joe Rogan Experience, for months.

“Australia has turned into a f–king prison colony,” he said.

“Australia has no guns […] and they are being overrun.” 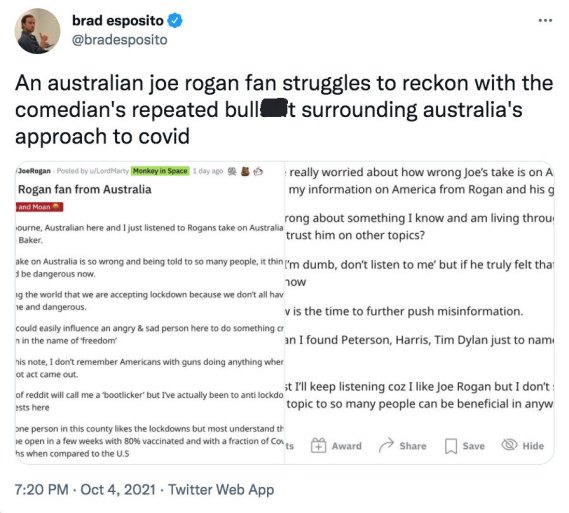 Rogan went on to mention viral scenes from the protests in Melbourne.

“Cops are pulling people over for simply being outside their homes, and they’re throwing them to the ground like thugs,” he said.

“You see these protests where they’re literally pepper-spraying old ladies in the face.”

Comedian and actor Rob Schneider was among the American celebrities to share such vision.

On September 28, he retweeted a video shared by Sky News Australia host Rita Panahi of a man being arrested by Victorian police for allegedly breaching lockdown conditions. He claimed it was “tyranny”.

That video has been seen more than 1.8 million times. Mr Schneider’s tweet got nearly 2000 retweets.

The right-wing media obsession with Australia’s COVID rules led to a bizarre situation where former Australian football player and convicted liar Nelly Yoa was interviewed on conservative news station Newsmax – which shot to notoriety after peddling voter fraud conspiracy theories after the 2020 US election – about vaccine mandates.

“The world is watching and it’s definitely not a good look for Australia on the international stage,” Yoa claimed, in an interview broadcast the day before the NYC protest.

He went on to decry police violence against “unarmed citizens”, who he referred to as “freedom fighters”.

Yoa didn’t mention the fact that he has worked as part of Victoria’s hotel quarantine program.

United Australia Party leader Craig Kelly, who has vehemently opposed lockdowns and vaccine mandates, shared footage of the protesters with the message “Thank you NEW YORK”.

“New York stands with Australians standing up for our Freedoms,” he wrote on Twitter, using the #SaveAustralia hashtag.

Mr Kelly had shared numerous social media posts critical of Victoria Police responses to protests, claiming it was a “police state”, and was guilty of “human rights abuses” and “police brutality”.

Former One Nation senator Rod Culleton shared images of the NYC protests on his social media, writing “the world is watching”.

The hashtag #SaveAustralia was still trending at No.13 on Australian Twitter by Wednesday.

“Murdoch’s global empire has been promoting the conspiracy theory that Australians are being held hostage by tyrannical governments as part of a ‘New World Order’,” Mr Rudd wrote on Twitter.

“No wonder these Americans think we need to be ‘saved’.”