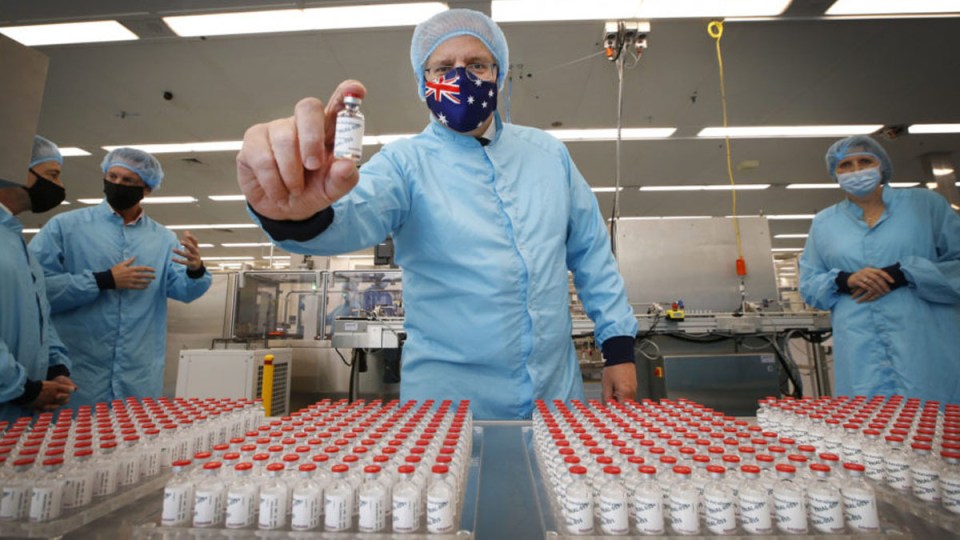 Experts have warned of scams around Australia's vaccine rollout, as fraudsters seek to capitalise on the pandemic. Photo: AAP

The number of Australians fully vaccinated against COVID-19 could be as low as 400,000, a data analyst has estimated, as pressure mounts on the Morrison government to reveal how many people have had both shots.

Australia is one of the only countries that does not regularly reveal how many people have been fully vaccinated, and the government is facing sustained criticism over the pace of the coronavirus vaccine rollout.

This follows calls by doctors for a public plan for reopening the nation’s international borders as the vaccine rollout progresses.

Anthony Macali is a data analyst and founder of COVID LIVE, which feeds into the global coronavirus tracker Our World in Data.

Mr Macali has been asking the Morrison government for data on fully vaccinated Australians for three months now.

To date, more than 3.1 million vaccination doses have been administered across Australia, but the federal government which missed its target of having four million Australians jabbed by the end of March, has not revealed how many of those are individual doses.

Mr Macali estimates the number of fully vaccinated Australians to be about 400,000.

Only New South Wales, Victoria and Western Australia currently publicise how many people have been fully vaccinated.

Currently, each state and territory is underutilising its supply of COVID vaccines, with the federal health department revealing this week just 75 per cent of the vaccines distributed had actually been put into people’s arms.

How Australia compares to other countries

Australia is out of step with every other country that feeds information into Our World in Data, including New Zealand, most OECD countries and the US, Mr Macali said.

In contrast to Australia’s secrecy, New Zealand gives a weekly breakdown of vaccine distribution by the number of shots, age, gender and location.

In the United Sattes, the Centres for Disease Control and Prevention update their vaccine tracker every evening at 8pm.

It shows the number of doses, the age, distribution over states and the type of vaccine.

Earlier this month, US President Joe Biden announced a goal to vaccinate 70 per cent of all US adults with at least one COVID-19 shot by July 4.

More than 30 per cent of adults in the US are already fully vaccinated.

What’s behind the secrecy?

Mr Macali said the federal government had already had more than enough time to roll out a proper national vaccine tracker.

“Three months in … it’s embarrassing our government is not providing it,” he said.

He said the government was creating a problem for itself by not releasing the numbers, as it looked like they were hiding them.

“[They need to] trust the people with more data,” Mr Macali said.

“They can still celebrate it if they explain it. People are smart.”

The New Daily put questions to the health department about the lack of data on fully vaccinated people but a spokesperson refused to answer them, instead responding with a link to the Department of Health website.

When asked why the government has been tight-lipped about the number of complete vaccinations, Health Minister Greg Hunt said it was a matter for the states and territories.

Decisions made in national cabinet are protected by cabinet confidentiality, so the public has no way of knowing what has been discussed or why decisions are made.

“I think of it this way, the AstraZeneca vaccine so far has roughly two-thirds of those administered. I think 66 per cent. Pfizer’s about 34 per cent,” Mr Hunt said.

“AstraZeneca, as yet, hasn’t yet entered the second dose phase yet, other than a few individuals who for their own personal circumstances have had to do that.”

The federal government does publicise the number of second COVID-19 vaccination doses delivered in aged care – so far 123,700 have been fully inoculated.

“Having timely and accurate figures, for people to understand … would help,” Associate Professor Griffin said.

He said other countries publicising the full breakdown of their rollouts had been “tremendously useful”.

“They’re keen to see those numbers climb quickly and get enthusiastic about the result,” Associate Professor Griffin said.

Although Australia’s rollout has fallen behind every target the government has set, there is no “easy solution”, he said.

“Limitation of supply, not all states have mass vaccination hubs yet, and hesitancy – there are people who are still worried, confused or overwhelmed,” Associate Professor Griffin said.

“I think there’s some issue getting the message out.”