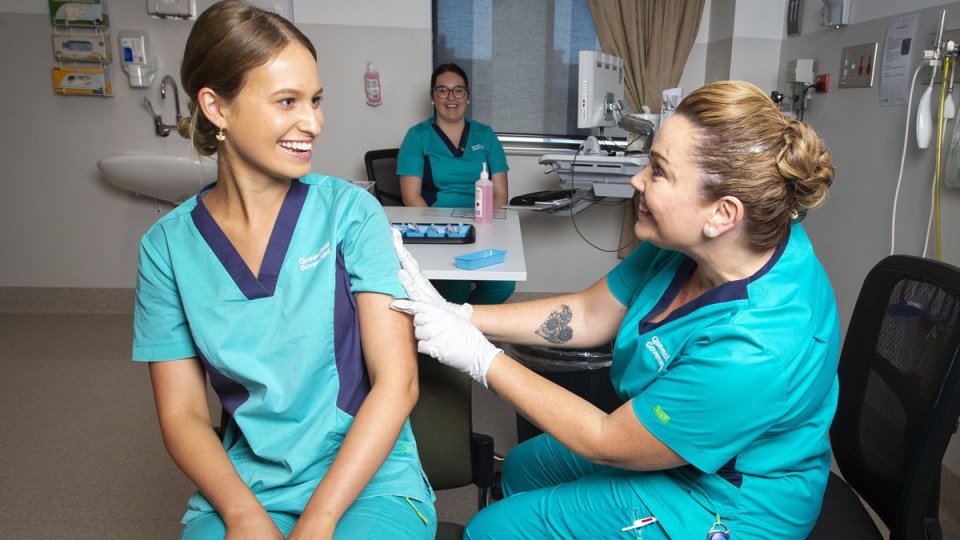 On top of all the other delays, the weather is further stalling the mass inoculation campaign. Photo: Getty

Medical experts have cast doubt on the federal government’s ambitious coronavirus vaccination target, saying it will be hard to achieve unless jab rates step up dramatically.

The Morrison government has set October as the goal for everyone who wants to receive a vaccination to have at least one dose.

Australian Medical Association president Omar Khorshid said it would be a challenge to vaccinate more than 20 million people in that time frame.

“I’ve been saying for a while that October is a pretty tough deadline to meet,” he told the Nine Network on Monday.

Dr Khorshid said the end of 2021 was a more realistic target.

His concerns came a day after the first 300,000 doses of the AstraZeneca vaccine landed in Australia. They will be tested by Australia’s medical regulator this week before being rolled out from March 8.

But NSW Premier Gladys Berejiklian echoed some of the concerns.

NSW is “well on track” to reach its target of 35,000 vaccines administered in the first three weeks, involving frontline workers and hotel quarantine staff, she said on Monday, but she wanted to know “as soon as possible” from the federal government how many doses of the AstraZeneca vaccine her state would get.

“Our teams are ready and willing to step up and increase our capacity but we need to know exactly how many doses we are getting beyond week four,” she said on Monday.

“We would need as much information as possible to prepare and scale up so we do have the capacity to provide more vaccines to our citizens than we anticipated.”

“We just think there is a bit of a need for the Commonwealth to share more information, to be a bit more transparent and make sure that the program that they have asked all states, all communities, all GPs and pharmacists to be a part of, [can] be delivered safely and quickly,” he said.

The AstraZeneca vaccine has different storage and use requirements to the Pfizer jab, which has been used so far in Australia.

Pfizer’s vaccine must be kept at -70 degrees and given in two doses, three weeks apart. The AstraZeneca version is easier to store and its two doses are recommended 12 weeks apart.

The AstraZeneca vaccine will also eventually be made in Australia.

“We’d like some certainty. We have been give an rough idea,” Ms Berejiklian said.

But infectious disease expert Sanjaya Senanayake was less worried about the delay.

“This is going to take a long time, we talked about it being the end of October. But I suspect it will probably be by the end of the year,” he told Nine.

“You want to iron out wrinkles at the start so you start off slow and build things up.”

Almost 30,000 Australians had been vaccinated since last Monday, including 8110 aged care and disability residents throughout 117 care facilities.

Dr Senanayake hoped the rollout could ramp up to more than 150,000 vaccinations a day at its peak.

The government has kicked off a second $31 million public information campaign on the vaccination program.

Health Minister Greg Hunt said a myth-busting unit had also been set up to stamp out “plainly ridiculous” information like 5G theories.

“We don’t want to give too much air to some of the silliest ideas,” he said.

“But we do want to provide public reassurance to combat in the marketplace those ideas which would in any way falsely have some impact on public confidence.”

People from the rest of New Zealand can continue to fly to Australia without the need for a 14-day quarantine.