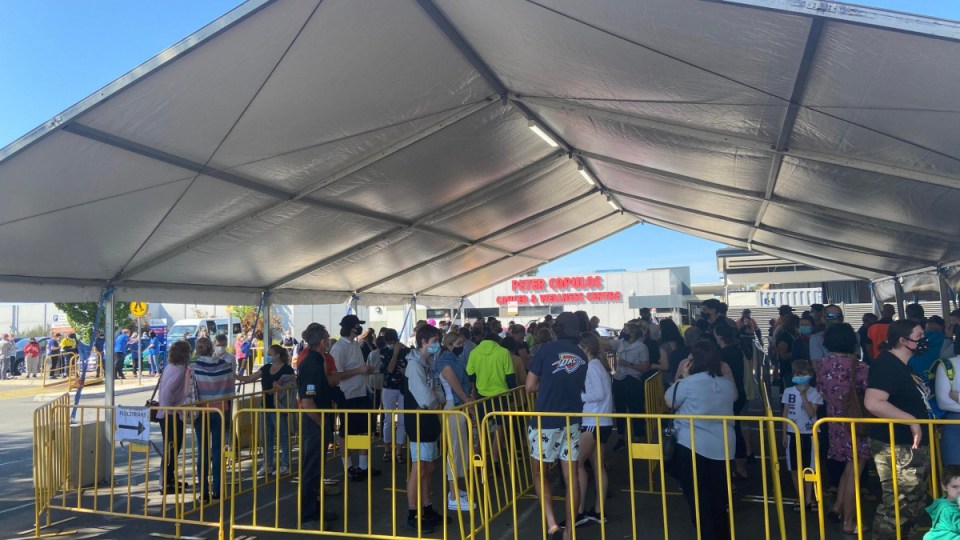 Worried Shepparton locals, desperate to get tested for the coronavirus after a cluster emerged in their town, have been turned away from testing centres unable to cope with demand.

Residents flocked to testing centres in the regional Victorian town on Wednesday after news emerged of three positive virus cases.

They turned out in their hundreds, answering a plea from the state’s chief health officer, Brett Sutton, to “crush it … test and quarantine”.

By early afternoon, there were reports of waits of up to six hours at one of two centres in the regional town, 160 kilometres north of Melbourne, with police reportedly turning people away.

The failure drew backlash on social media, with some raising concerns around social distancing for people waiting in the lengthy queues.

The town’s newspaper, the Shepparton News, said Goulburn Valley Health’s Acute Respiratory Clinic at Graham Street and the McIntosh Centre at the local showgrounds had both reached capacity by 2.40pm.

Locals were asked to go home and come back on Thursday.

Both centres will open again on Thursday, while testing will also be available at the Shepparton Respiratory Clinic, at 172 Welsford Street, by appointment.

The new cases, linked to Melbourne’s Chadstone outbreak, were announced late on Tuesday by the state’s commander of testing, Jeroen Weimar.

“We have three active cases that are self-isolating at home and are being monitored by Goulburn Valley Health,” Mr Weimar said.

The Shepparton cluster has been linked to the shopping centre outbreak, and cases in Kilmore (also in Victoria’s north) last week.

Health authorities were visibly frustrated on Wednesday when they admitted they had learned the same man who was infected at Chadstone and then went to regional Kilmore on September 30 also travelled to Shepparton on the same day.

He had not told health authorities and the link was only uncovered when a worker at a Shepparton tyre centre developed symptoms and went for testing. Contact tracers linked the tyre centre with another in Benalla, also in central Victoria, where the infected Melbourne man had also been.

“An individual who had a permit to travel into regional Victoria, as well as stopping off in Kilmore also stopped off in Shepparton,” Mr Weimar said.

Premier Daniel Andrews said the man – who spread the Chadstone coronavirus outbreak to both towns – has been referred to police after the discovery.

“It has gone to the compliance unit and they will provide further information to Victoria Police from DHHS and they will make further judgements,” Mr Andrews said.

“By trouble, I am not just talking about a fine but there are infections in Shepparton today that we know of and there is almost certainly going to be more that were all completely preventable if this individual had told the full story.”

State independent member for Shepparton Suzanna Sheed said the northern Victorian town was behind the eight ball, because the virus had circulated in the community for up to 12 days.

Ms Sheed said the regional community had been virus-free for several weeks and the outbreak will cause great anxiety.

“This is just the sort of thing we dreaded,” she said.

Further positive tests are expected after this week’s testing blitz. Authorities have listed eight high-risk sites in the town from September 30-October 8.

Including the Shepparton cases, Victoria had just seven more COVID infections on Wednesday. It is the state’s first day of single-figure new cases in nearly a week.

There were also five more virus-related deaths, taking the state’s toll to 816 and the national figure to 904.

They were two men in their 80s, two women in their 90s and a womann in her 70s. Four of the deaths occurred before Wednesday’s reporting time frame.

Elsewhere in the state’s east, Bairnsdale Secondary College also had a positive case.

The school posted the news on its Facebook page, saying it had been advised of a reported case, but does not have to close because the person did not enter the grounds while contagious.

The previous night, a motion of no-confidence against Premier Daniel Andrews and his handling of the pandemic was easily defeated.