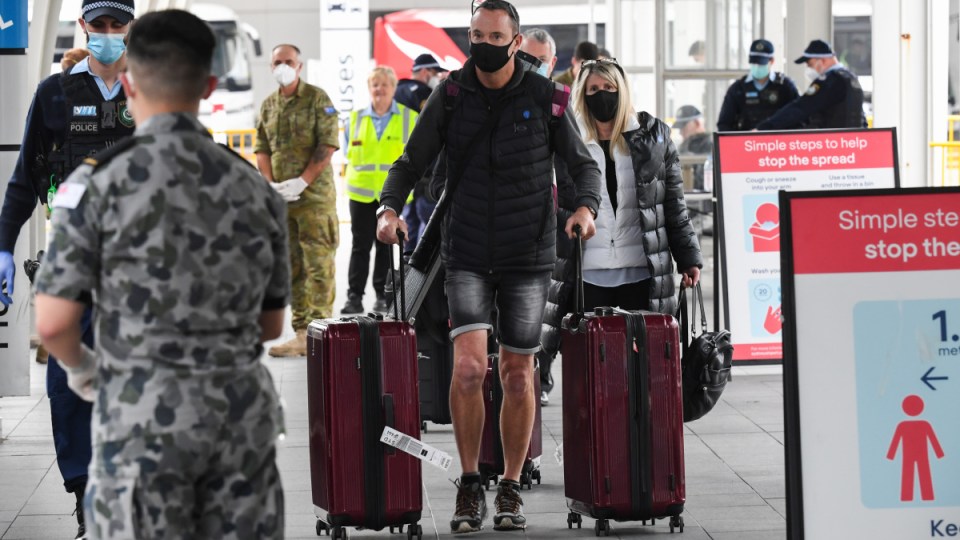 The two travellers managed to board a plane to Melbourne instead of quarantining in Sydney. Photo: Getty

But Mr Morrison is pushing to increase the number of people who can come back into Australia by about 2000 a week – on commercial flights.

But his plan appears unlikely to involve the country’s national airline, with Qantas boss Alan Joyce standing firm on his decision to ground all international flights.

More than 27,000 Australians are waiting to return but with a weekly cap of 4000 incoming passengers, it could take many weeks yet. Stranded Australians overseas have also reported price-gouging by airlines and being bumped off multiple flights as they try to get home.

Labor has urged Mr Morrison to use Royal Australian Air Force jets to bring people back.

“Our advice is there is no need for that,” Mr Morrison told the Seven Network on Thursday.

“There are plenty of commercial planes … it’s the caps that were stopping the planes.”

He wants the cap lifted at the end of next week.

Deputy PM Michael McCormack has written to the states and territories to seek their support because returning Australians will need to spend time in hotel quarantine.

Several premiers have signalled their support for lifting the weekly cap, albeit with caveats.

NSW, Western Australia and Queensland are each expected to take an extra 500 people each week.

The Commonwealth cap was introduced in July when Victoria’s second wave spiralled and it put a hold on taking any international arrivals. NSW struggled to cope with the extra demand as a result.

“That was reasonable at the time. But we’ve done the review of quarantine, we’ve got ADF people in Western Australia and Queensland and NSW and other places, so now is the time we’ve got to start taking those caps off again,” Mr Morrison said.

Elsewhere, Mr Joyce is pleading with the states to reopen domestic borders and the airline has taken out full-page newspaper ads on Thursday to push its case.

“Europeans have been fighting themselves for thousands of years but they have somehow managed to agree to keep borders open,” he said.

Australia’s national panel of medical experts has proposed new definitions for coronavirus zones and hotspots to try to get state borders reopened.

Mr Morrison is expected to discuss the proposals with premiers and chief ministers at a national cabinet meeting on Friday.

“The Commonwealth has its hotspot definition – I think that’s a sensible definition,” he said

“If other states want to have more extreme definitions, then that’s ultimately up to them. That obviously has implications for how they run their show and what it means for people’s jobs and all of those sorts of things.

“I’m sure they will keep working on that.”