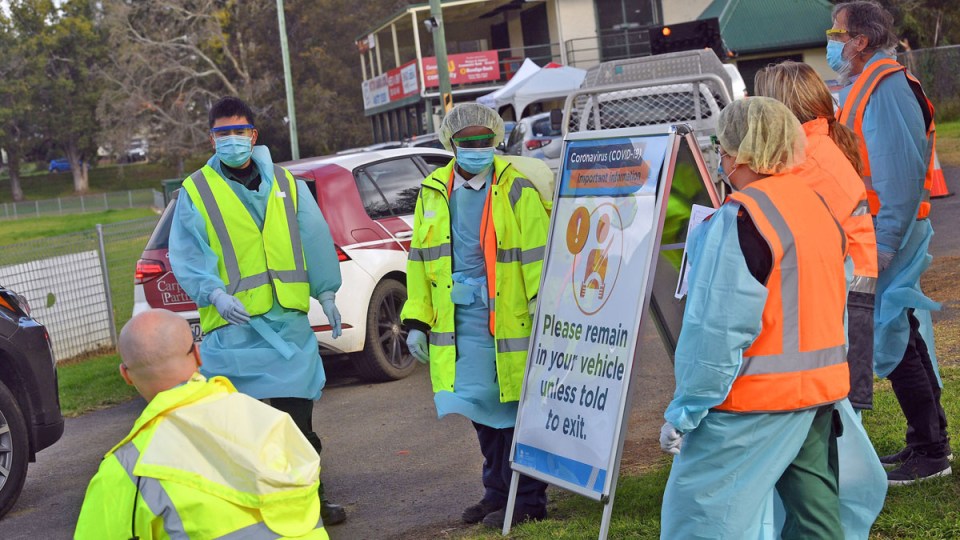 New South Wales recorded 20 new coronavirus cases on Monday amid the threat that a troubling new cluster in the state could see infections spread to the Australian Capital Territory.

The NSW infections represented a three-month-high and Premier Gladys Berejiklian said all of the new cases were from known sources.

The state’s latest hotspot is around Batemans Bay, where eight people who attended the town’s Soldiers Club have so far been diagnosed with COVID-19.

Batemans Bay on the NSW south coast is a popular holiday spot for ACT residents and a pop-up testing clinic in the town was inundated on Monday morning, with some people turned away.

Ms Berejiklian says the next couple of weeks are critical for the state.
“Whilst I remain incredibly concerned, that is one positive takeout that all of the cases now are from known sources, which means that people are taking advice and we need them to continue to do that,” she said.

The NSW announcement came as Victoria recorded 275 new cases since Sunday, as well as the death of a woman in her 80s.

“There is hope going into today that the figures stabilise, that they don’t go beyond the 300 or 400 that we have seen in two of the last three days,” Victorian Premier Daniel Andrews said.

Mr Andrews said 28 cases were connected to known outbreaks, 247 were under investigation, with 147 in hospital and 31 in intensive care units.

On Sunday, Victoria recorded 363 cases with another three deaths, two men and a woman all in their 90s. The state’s highest number of 428 was recorded on Friday.

The Batemans Bay Soldiers Club has been forced to close its doors for two weeks after eight people who attended the venue tested positive, including a staff member.

“This is obviously devastating news to our community and we have to make sure everybody isolates, everybody gets tested and sticks to the critical rules that are there to keep us safe,” Transport Minister Andrew Constance told Channel Nine on Monday.

ACT chief health officer Kerryn Coleman signed a new public health direction on Monday morning, requiring anyone who visited the club on the days in question to quarantine at home for 14 days.

Dr Coleman said about 60 people who had attended the club were currently in isolation in Canberra.

There are just five active cases in the ACT.

In Victoria, an inquiry starts Monday into the bungled hotel quarantine of returned overseas travellers, which the state’s chief medical officer has said may be the root of the Melbourne outbreak.

The probe will be led by retired judge Jennifer Coate, assisted by Tony Neal QC.

The inquiry was instigated by Mr Andrews after it was revealed protocol breaches by security guards at two Melbourne hotels led to outbreaks.

Management of the hotel quarantine program is now being undertaken by Corrections Victoria, and police will also provide additional support, the Premier confirmed on Sunday.

“Information already available to the inquiry suggests the possibility of a link between many of the cases of coronavirus identified in the Victorian community in the past few weeks and persons who were quarantined under the hotel quarantine program,” Mr Neal said Monday.

From midnight on Wednesday, residents in Greater Melbourne and the Mitchell Shire will be required to wear face masks or face a $200 fine.