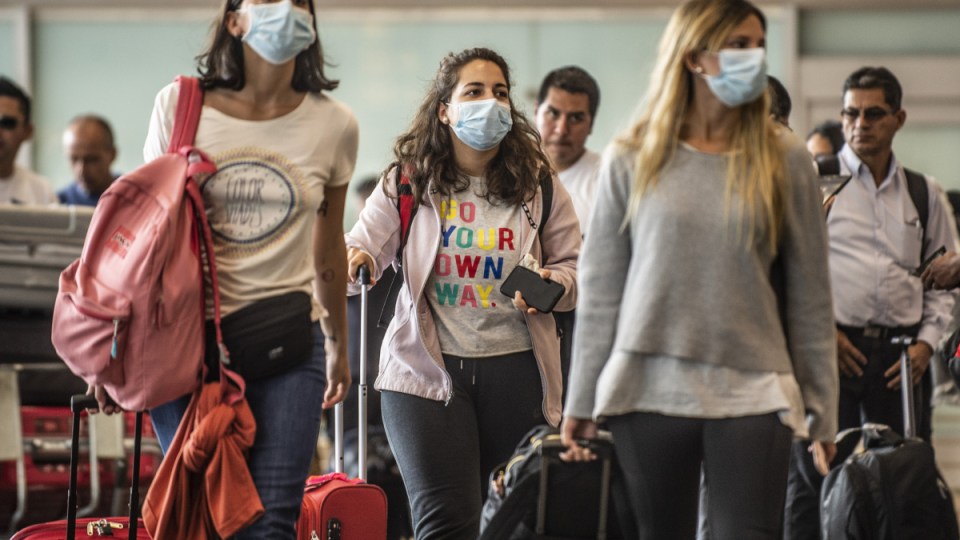 Return travellers were transported directly to hotels across Melbourne where they were quarantined for 14 days before being released. Photo: Getty

The state government launched the investigation, headed by retired judge Jennifer Coate, after new COVID-19 cases in late May and early June were linked to infection control breaches by security guards at quarantine hotels.

The opening of the inquiry came as Victoria recorded 275 new cases since Sunday, as well as the death of a woman in her 80s.

A dozen Victorian schools were also forced to close their doors on Monday, all recording cases of COVID-19.

More than 700,000 students from prep to Year 10 resumed remote and flexible learning on Monday, while VCE, special needs, and vulnerable students returned to class last week.

Victorian Premier Daniel Andrews said there was hope that the infection figures had stabilised, “that they don’t go beyond the 300 or 400 that we have seen in two of the last three days”.

Mr Andrews said 28 cases were connected to known outbreaks, 247 were under investigation with 147 in hospital and 31 in intensive care units.

On Sunday, Victoria recorded 363 cases with another three deaths, two men and a woman all in their 90s. The state’s highest number of 428 was recorded on Friday.

Speaking at the opening of the quarantine inquiry, senior assisting counsel Tony Neal QC said information already available suggested the possibility of a link between “many of the cases of coronavirus identified in the Victorian community in the past few weeks and persons who were quarantined under the hotel quarantine program”.

“Comments made by the chief health officer to the media have suggested that it may even be that every case of COVID-19 in Victoria in recent weeks could be sourced to the hotel quarantine program,” he said.

The decisions and communications between the government, hotel operators and private contractors will be examined and submissions have been ordered from them by the end of July.

Hotels with coronavirus outbreaks include:

Medical experts, hotel staff and returned travellers who stayed in quarantine will be called to give evidence.

Employers face significant penalties if they attempt to deter employees from giving evidence to the inquiry.

“I expect no less than full, frank and timely cooperation from all government entities and persons to enable me to do my job for the people of Victoria,” Justice Coate said.

It is not known if Premier Daniel Andrews, Health Minister Jenny Mikakos or Chief Health Officer Brett Sutton will be called to give evidence, but Mr Andrews said neither he nor any government minister had been approached.

“I won’t tell a former judge how to do her work. She will call whomever she thinks she needs to call. Anyone who is called should turn up,” Mr Andrews told reporters on Monday.

“When the government has made mistakes and people have died as a result, Victorians need answers. First of all to work out what went wrong and secondly to make sure nothing like this can ever happen again,” he said.

International flights have been diverted from the state until the situation is under control.

Public hearings will be held from August 6 and a final report is due on September 25.

Hotel operators and security under the pump in Victoria coronavirus inquest