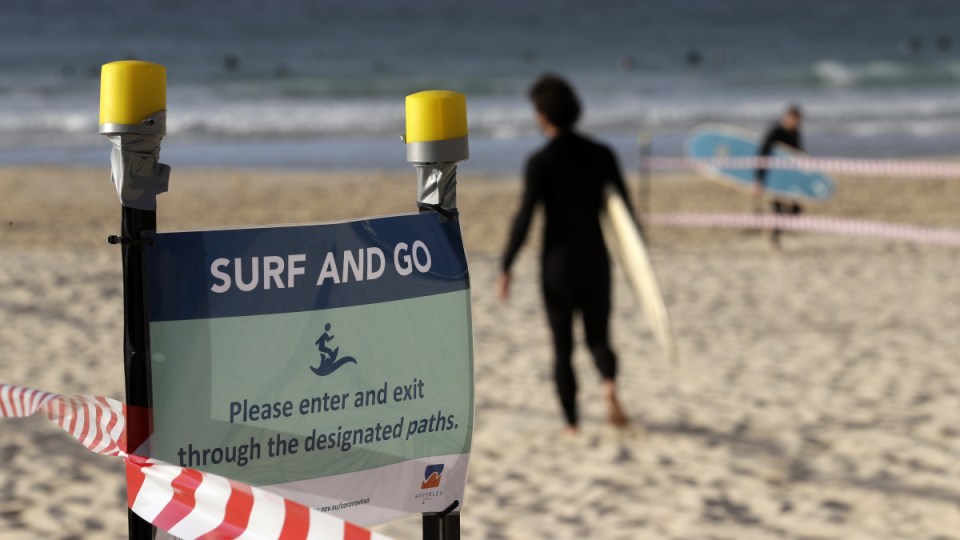 A sign at Bondi on Tuesday, urging beach users to ‘surf and go’. Photo: AAP

NSW will relax some of its toughest coronavirus restrictions from Friday, allowing two adults to visit another household.

The decision came as Sydney’s Bondi beach reopened to locals and the state’s coronavirus toll rose to 37, with the seventh death of a resident from the Newmarch House aged-care home in western Sydney.

Newmarch House operator Anglicare said the 89-year-old woman died on Monday night. She is the 84th person to die of COVID-19 in Australia.

“This coronavirus pandemic has been unprecedented in terms of its scale and impact across the world. But more importantly we know what a devastating effect it is having on older people,” Anglicare chief executive Grant Millard said.

The coronavirus was introduced to the Caddens home by an aged-care worker who worked for six days while suffering mild respiratory symptoms.

Elsewhere, NSW Premier Gladys Berejiklian said on Tuesday that with new COVID-19 cases on the decline in NSW, the government could reassess restrictions at the end of each month.

It had already announced plans for a staggered return of students to schools from May 11.

From this Friday, it will allow up to two adults to visit another household for social or care reasons. There are no limits on the number of children those people can take with them.

Ms Berejiklian also expected an uptick in retail activity throughout May.

“We know that for many people, they’ve been cooped up in their homes for a number of weeks, and with the exception of exercising, medical needs or buying what they need to or going to work, many people have been isolated,” Ms Berejiklian said.

She admitted health authorities expected the change to increase the number of new COVID-19 cases but said NSW hospitals were prepared.

“Don’t take risks – we don’t want to see the numbers suddenly spike up because people are being irresponsible,” she said.

“If you have the mildest sniffle, do not go and visit anybody [or] if you’re feeling slightly unwell or fatigued, don’t risk it.

“Because there’s too much at stake.”

Those aged over 70 have been urged to remain at home as much as possible.

Bondi beach, meanwhile, has reopened for swimming and surfing. However, but the sand will remain closed because the area has the highest number of COVID-19 cases in Australia.

Waverley Council mayor Paula Masselos said the waters at Bondi, Bronte and Tamarama beaches would reopen on Tuesday “for the sole purpose of exercising”.

People will be able to surf or swim between 7am and 5pm on weekdays, with access to the water through designated entry and exit points.

The mayor said the “swim and go” and “surf and go” measures were strictly for Waverley residents and people shouldn’t drive to the beaches from further afield.

All of Randwick City Council’s beaches will again reopen from Tuesday without any time restrictions. The beaches were initially opened last week but then closed several times over the Anzac Day weekend as crowds flocked to the sand.

Beaches in Dee Why, Freshwater and Manly, which are under the Northern Beaches Council, remain closed.