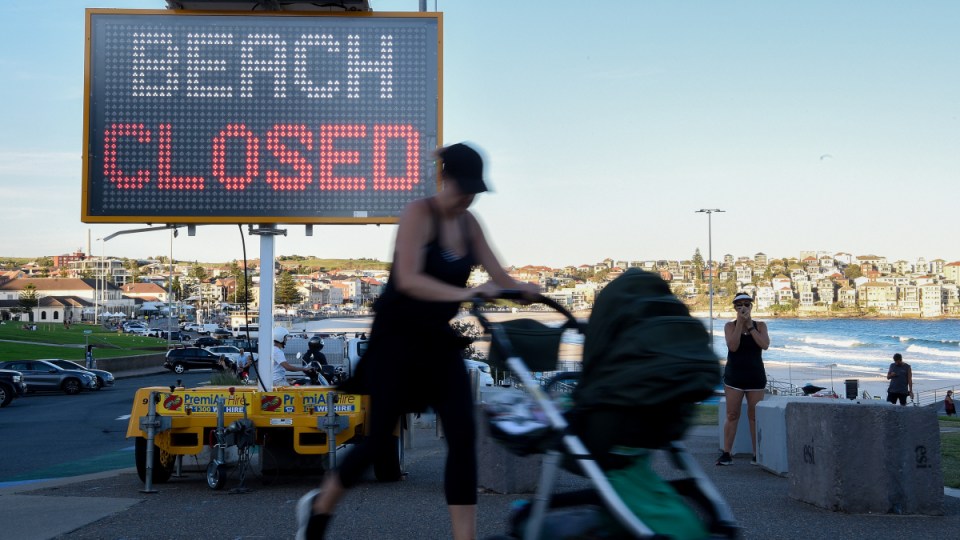 Beaches might have reopened, but many other restrictions are here to stay for a bit longer. Photo: AAP

A decision to reopen popular Sydney beaches has brought mixed reactions, amid concerns locals are already planning get-togethers on the sand.

Australia’s coronavirus infections passed 6606 and the death toll rose to 72 on Sunday. But the news was not all grim as shires eyed loosening restrictions for outdoor exercise and national leaders marked a promising milestone: We are flattening the curve.

Health Minister Greg Hunt said the rate of new infections had fallen below 1 per cent in the past week – a rate he hailed as “an important national achievement”.

“What it means is we now have a sustained and genuine flattening of the curve,” Mr Hunt said.

“We are winning, but we have not won yet. We have to focus on our containment and capacity.”

Rather than the promising signs fuelling calls for Australia to investigate ways to reopen businesses, however, economists have warned to do so would cost even more jobs.

But in one major change from Monday, one council in a NSW virus hotspot has promised it will at least help people get outside and back into popular activities.

Coogee, Maroubra and Clovelly beaches will reopen from Monday morning – strictly for swimming, surfing, walking, running or exercise on the sand (while adhering to social distancing rules).

“Living along the coast, I know how important our beaches are to the mental and physical health of so many in the community,” Randwick Mayor Danny Said said.

“Our decision to close the beaches three weeks ago was not taken lightly … particularly given the concentration of COVID-19 cases in the eastern suburbs [of Sydney].

“Our decision was also based upon expected crowd numbers and people’s initial behaviour.”

Authorities will be on the lookout for people sun-baking or gathering in groups on the sand.

While many locals were commending the “common sense” approach, others took to the council’s social media page concerned groups would not adhere to the social distancing rules.

“So people are just going to for a run or swim and leave?” one woman wrote.

“Not what I observed in a Randwick Council park this weekend with umbrellas erected to help shield sunbathers and dog walkers congregating whilst their pets frolicked.”

Randwick is considered a COVID-19 hotspot, with the 10th-highest rate of the virus in NSW.

It's understandable that patience may be running thin.

That thoughts such as, 'Things are getting better, so let's call an end to this thing now,' may percolate.

But now is a critical time to stick solid & keep self-isolating.
You are doing brilliantly. You are saving lives. pic.twitter.com/obh80IiV0R

‘Let’s not get too excited’

NSW Health Minister Brad Hazzard also thanked the community for its “amazing” response to restrictions as he revealed that modelling in early March had forecast 700 deaths and 35,000 cases by April 15 if nothing was done.

“We’re doing very well, but let’s not get too excited. We’re barely halfway through the first quarter of the very long game,” Mr Hazzard said.

He extended the $5000 on-the-spot fine for spitting and coughing on health workers to include all workers.

The retail workers’ union said its members had borne the brunt of a huge upsurge in customer abuse that had become “disturbingly common”.

Health workers have been reminded to stay at home if they are sick after COVID-19 breakouts in north-west Tasmania and a residential aged-care facility in NSW were linked to ill staff.

“If you are unwell, please do not go to work. It may be as minor as a scratchy throat, please don’t go to work,” Ms McMillan said on Sunday.

Ms McMillan thought it was ambitious to suggest COVID-19 could be eradicated.

“It’s a pandemic around the world and so we always have the potential to reintroduce it … if we were to open our borders,” she told Sky News.

The warning comes after about 500 people from East Devonport’s Melaleuca Nursing Home, Ulverstone’s Eliza Purton Home and Coroneagh Park in Penguin were tested on Friday after an employee who had worked at the three facilities tested positive for the virus.

Tasmanian Premier Peter Gutwein said on Sunday a 79-year-old woman from the Melaleuca home is the only person whose test has come back positive.

“We all need to remain disciplined. We need to ensure that we follow the rules and that we do everything that we can,” Mr Gutwein said.

“Now is not the time to relax or become complacent.”

In a boost for frontline healthcare workers, personal protection equipment, including an extra 100 million masks, will be distributed in the next six weeks.

South Australia ‘not losing the war’

On a brighter note, South Australian chief public health officer Nicola Spurrier announced on Sunday that there had been no new coronavirus cases in the state, for a second consecutive day.

Professor Spurrier said a testing blitz had helped the state to “a really good place” before the arrival of two flights repatriating a total of 880 citizens from India and elsewhere overseas on Monday and Tuesday.

On the downside, Police Commissioner Grant Stevens said 18 young people had been issued notices after a group of up to 100 were found at a car-based event at Penfield.

Elsewhere, a second person died at a Sydney high-care nursing home where a quarter of residents and 13 staff have been infected with the virus.

Anglicare confirmed a 94-year-old man with COVID-19 died at its Newmarch House in Caddens on Sunday, following the death of a 93-year-old man on Saturday.

The high-care facility, home to about 100, had 27 residents and 14 staff infected as of midday on Sunday.

NSW chief health officer Dr Kerry Chant said there was an “extensive intervention in place” but the most recently reported cases were likely infected many days ago.

“There’s nothing we can do around preventing those cases and I think this extensive testing has identified the cases early,” she said.

“Now we need to stop the spread.”

Three other men, in Queensland, Victoria and Tasmania, also died on the weekend.

On a day in which Government Services Minister Stuart Robert berated Barnaby Joyce for expressing privacy doubts about the planned COVID-19 tracking app, Prime Minister Scott Morrison said the app would not be mandatory.

But Mr Joyce told Nine newspapers: “I treasure the government knowing as little about me as possible.”

He wasn’t alone, with several Coalition politicians saying they won’t download the mobile phone app when it is introduced within the next couple of weeks.

Nine more crew members of the Ruby Princess cruise ship have tested positive to COVID-19, taking the total number of crew infected to 171.

A day after news emerged of a US family taking legal action against Princess Cruises, the ship remains docked at Port Kembla. It is likely to stay there for the foreseeable future.

A 57-year-old woman who has been in quarantine at Hobart’s West Point Casino was charged on Sunday with repeatedly breaching restrictions.

Police were called to the hotel on Saturday after the woman had left her room repeatedly to smoke and was allegedly abusive to staff.

She was warned she would be arrested if there were other breaches. Police charged her less than 24 hours later with two counts of failing to comply with public health directions.

She was bailed to return to her room.