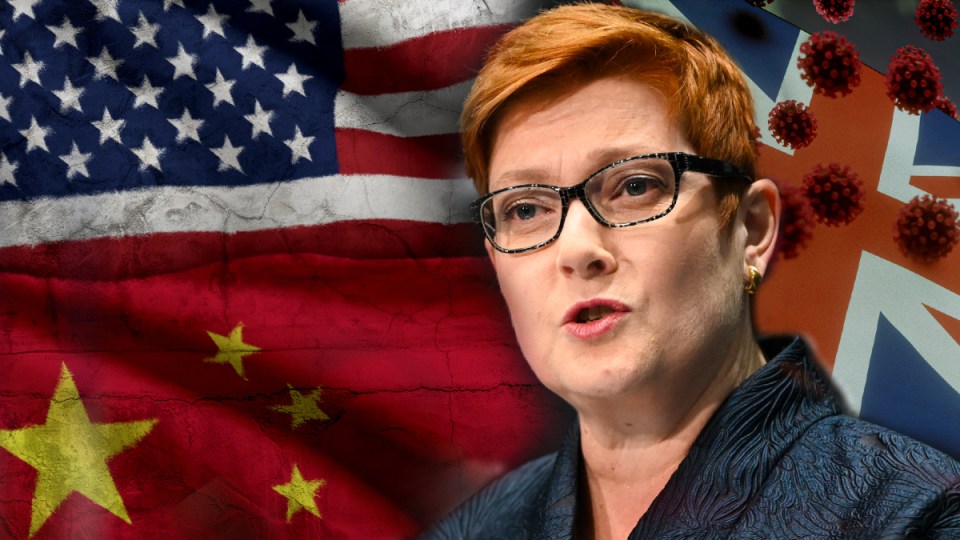 Foreign Minister Marise Payne said on Sunday she had concerns over how transparent other countries were with their virus data. Photo: Getty

Foreign Minister Marise Payne has hinted at concerns of a coronavirus cover-up as she called for an independent probe into how global health leaders have handled the pandemic.

Senator Payne said there must be a review into China’s “transparency” before and throughout the COVID-19 crisis.

But she was hesitant to say if she had lost trust in Beijing all together.

“My concern about these issues, though, is at a very high point,” she said on ABC’s Insiders on Sunday.

Australia must go into an investigation with “eyes wide open” to our national interest, the senator said, adding that the government’s relationship with China would change after the pandemic.

It comes after US President Donald Trump turned up the heat on China, as he suggested Beijing was embarrassed by its failure to warn the world about the seriousness of the illness that had been spreading since late 2019.

Mr Trump said “a mistake is a mistake” but “if they were knowingly responsible … then sure there should be consequences”.

He would not say what actions the US might take.

Mr Trump’s comments are in stark contrast to his initial praise for China’s President Xi Jinping and come at a time he’s facing mounting criticism of his leadership through the spread of what he has repeatedly referred to as the “Chinese virus”.

.@David_Speers: Do you trust China?@MarisePayne: I trust China in terms of the work that we need to do together. The issues around the coronavirus are issues for independent review.#Auspol #Insiders pic.twitter.com/6qzyiqoUr5

Last week, an under-pressure Mr Trump redirected the spotlight to the World Health Organisation, slamming its handling of COVID-19 information and accusing it of failing to hold China to account.

Asked if she believed WHO was “beholden” to China, Senator Payne said the Morrison government shared some of the US’s concerns.

Australia has been among the countries taking aim at WHO’s decision to allow Chinese ‘wet markets’ to re-open.

Senator Payne slammed as “dubious” the safety standards of the markets where the virus is believed to have first spread to a human.

But the minister said Australia would not follow Mr Trump’s lead by freezing funding for the organisation.

Who knew what and when?

For weeks now pressure has been mounting on China to “come clean” on what it knew about the virus – with Home Affairs Minister Peter Dutton and former foreign minister Alexander Downer among those calling for an investigation in recent days.

“If China resists that I think that they will arouse the wrath of the international community,” Mr Downer told the Australia-UK Chamber of Commerce on Friday.

Central to the mounting concerns about China’s transparency are its death toll figures.

China has been forced to correct its public figures, but questions still remain over their accuracy.

Compare that to other hard-hit countries including the US, which by Sunday night had recorded more than 39,000 deaths.

What is clear is that the information coming from the original epicentre initially did not fully convey to other countries how deadly COVID-19 could become.

That includes assurances given directly to Australia.

Senator Payne confirmed on Sunday that on January 30 her Chinese counterpart Wang Yi had informed her the flu-like illness that developed in the city of Wuhan was curable and preventable.

But Senator Payne said: “Certainly I believe he was making a genuine statement to me at the time”.

She added that back in January leaders had a different idea about the trajectory of the virus.

But while predicting the scale of the global health crisis might have been impossible for government officials, evidence shows authorities in China were aware – in some way – the health of citizens was at grave risk.

As far back as December, ophthalmologist Li Wenliang sounded the alarm – only to be detained by police for “fear-mongering”.

The 33-year-old doctor died of the coronavirus six weeks later.

A British think tank believes China is liable to pay $6 trillion in damages to affected countries for not sounding the alarm sooner, among other things.